Posted on 2016年6月28日 by MorningBerryz

Usually when it comes to remixes/rearrangements of beloved songs I often shiver @ just the notion of them, and yet there are always exceptions surely. Like consider The Beatles being rearranged and how much of a wall that would hit amongst hardcore fans crying foul! =O But then you have to always consider the style and approach as well to the reimagining of familiar songs and just the possibilities of another’s imagination and creativity giving second breath…. even to those songs held most dear and beloved, can be a wonderful thing. Sometimes =P. Gosh it seems the last time I truly loved a “cover” album was way back with 2004’s release of “Blue: A TRIBUTE TO YUTAKA OZAKI”.. which remains a memorable personal favorite♥.

So imagine my anxiety filled curiosity when I first head about an all time-favorite J-artist in ZARD (Sakai Izumi) being rearranged by a wide array of musical minds and the compilation album it would produce! The track listing is what really loosened me up to getting excited to hear how these creative minds would work their own touches and influences into reimagining a pretty stellar list of ZARD songs… and so I pre-ordered the album and have been working many of the songs into my playlists since its launch mid last month =).

Now much like beauty is in the “eye of the beholder…”, music and particularly the rearranging aspect here, makes this compilation one which can only be given individual verdicts…. song by song by the listener themselves. You know, where said listener is specifically well tuned into the music of ZARD and these song selections specifically. And so with that being said, if you’re a ZARD fan I’m sure your curiosity will lend to checking a few or all of these newly recorded arrangements out ^^.

~d-project with ZARD can be ordered @ CdJapan~

In all there are 14 tracks () (edit: all ZARD d-project tracks have now been included per request by Rupert12050) which seamlessly keep Sakai Izumi’s vocals in time and in harmony all the while making these songs as if they were the re~imaginer’s very own. Also 90’s J-artist Ohguro Maki joins in on the lead vocals both in harmony and in solos as she prominently appears on eleven out of the fourteen songs.

And while my personal Ohuro Maki collection isn’t large by any means, I so would recommend her album “Back Beats #1 The Best Performed by Maki Ohguro” which was released on December 11th, 1995 as it’s pretty much her definitive collection~.

Now first let’s meet the minds behind each of these rearrangements which also include guest musicians, a featured MC and of course the aforementioned Ohguro Mak whom performs the lead vocals alongside Sakai Izumi: 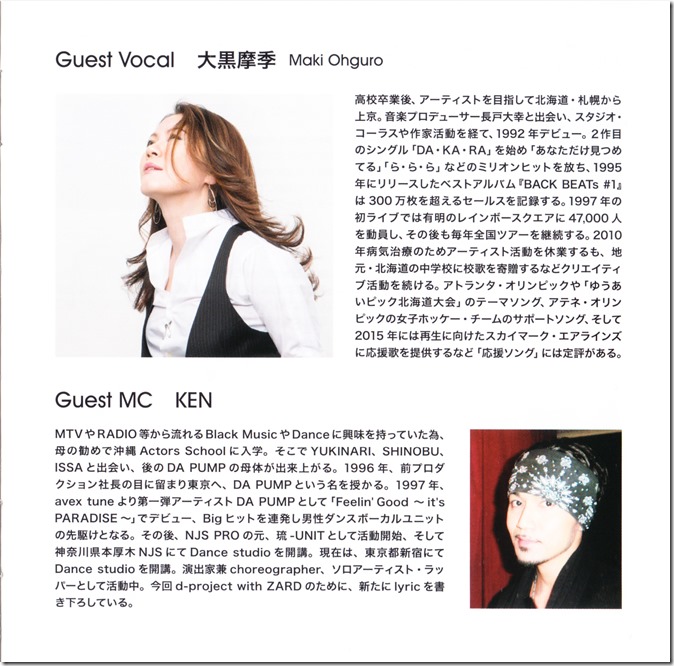 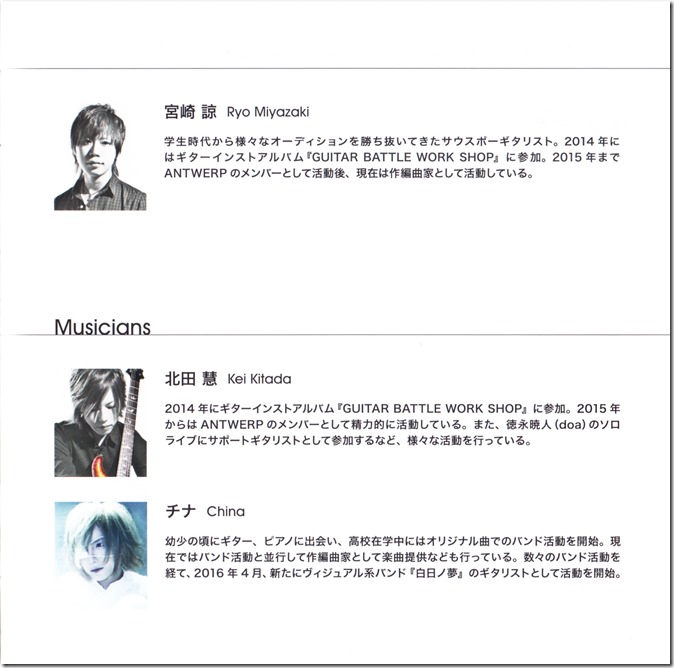 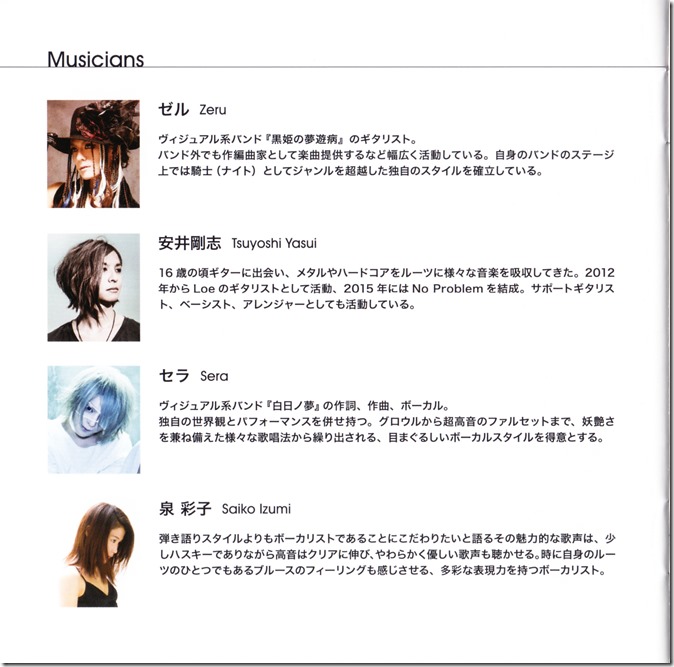 For comparison sake and convenience, I’ve included the original ZARD recordings after each rearranged version . (edit: all fourteen ZARD d-project tracks have now been included) 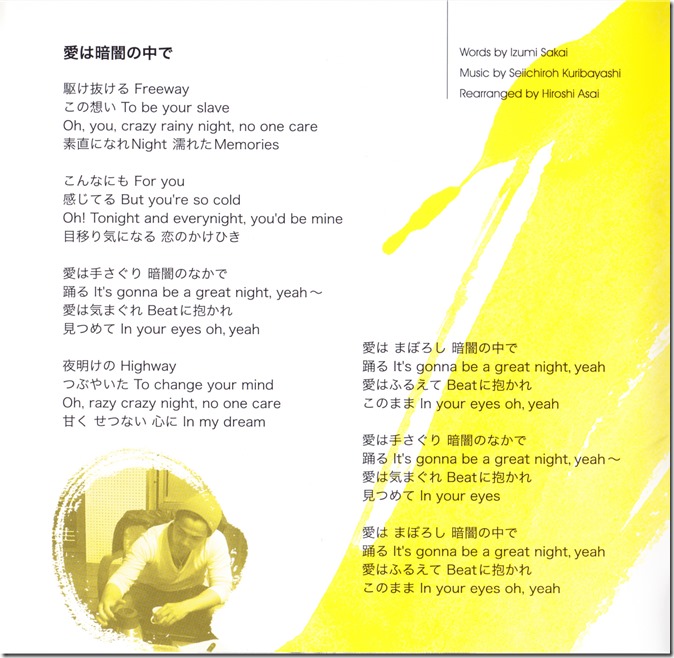 Being hit by hip~hop right away was eye opening and then something amazing happens as the song streamlines into its rock groove and here you first hear Ohguro Maki during the chorus doing a fine job backing Sakai Izumi. The subtle electronica touches are nice but what I really love here are the enhanced drum beats and that cool electric guitar strumming a groove in the background, both of which give this familiar song such a different feel and the rap portions really work well in both the intro and the middle break!…. never thought I’d say that about a ZARD song =).

Now this new take on “Makenaide” is about as drastically different as one could imagine but not in the beat as it’s pretty similar but rather in the style of instrumentation during the verse portions…. of course the distorted electric guitar pays homage to the original still. And those new harmonies, particularly during the bridge are awesome!! Once again the drum backbeat’s quite an imaginative change too.

Now this beloved ballad reborn remains gorgeous and mellow, and yet those new synths, piano and electric guitar arrangements are very very cool!~! This is perhaps my most favorite remake here, I just love what’s been done to the rhythm overall creating this wide-open and vibrant feeling… difficult to place into words really but BRAVO~*!! Never imagined that “Kitto wasurenai” could become equally amazing by another mind and yet here it is. 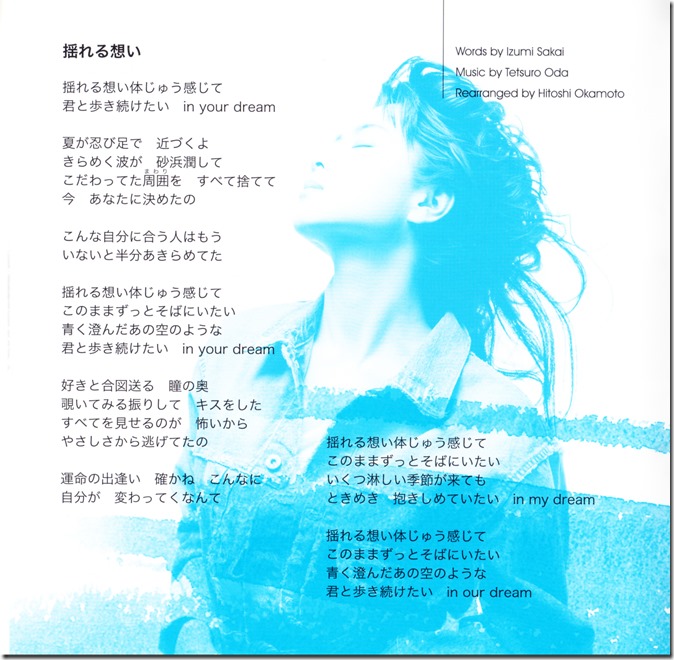 Now you don’t even readily recognize “Yureru omoi” for its first opening notes here as it’s nothing like the original but really isn’t that part of the point and still the familiar melody of this song kicks in with Sakai Izumi’s sweet vocals and hearing Ohguro Maki sing in harmony right along during the chorus is a pure joy. Furthermore here Ohguro Maki gets her solo verse sections to kick it with her brand of powerful vocals alone and when you hear that transition to Sakai Izumi’s vocals which are such a contrast …from Maki’s powerful and low ~~> to Izumi’s sweet and powerful, it makes total sense that Ohguro Maki was chosen for this project. Also kudos to all of the reimagined guitar solos which appear on this album, very cool to hear such different approaches to these familiar melodies. 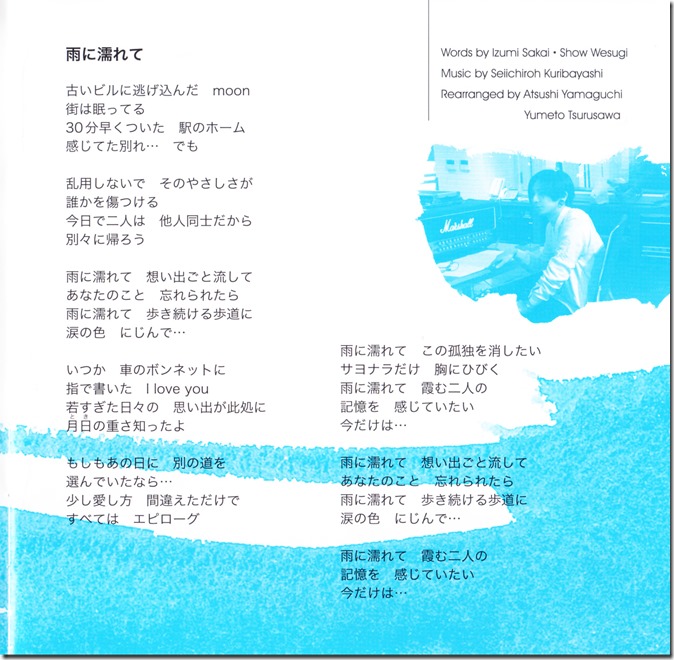 Now the rapid powerhouse which has always been “Ai ga mienai”’s charm is a difficult one to reimagine I imagine =P… and yet while this track doesn’t stray far at all from the original ZARD version there is definitely the element of enhanced instrumentation all around happening here throughout the song. I particularly love what the lead guitars have become here with some very new mini interludes which scream aggressive, and with Sakai Izumi and Ohguro Maki trading off the lead vocal parts it’s pretty wonderful! 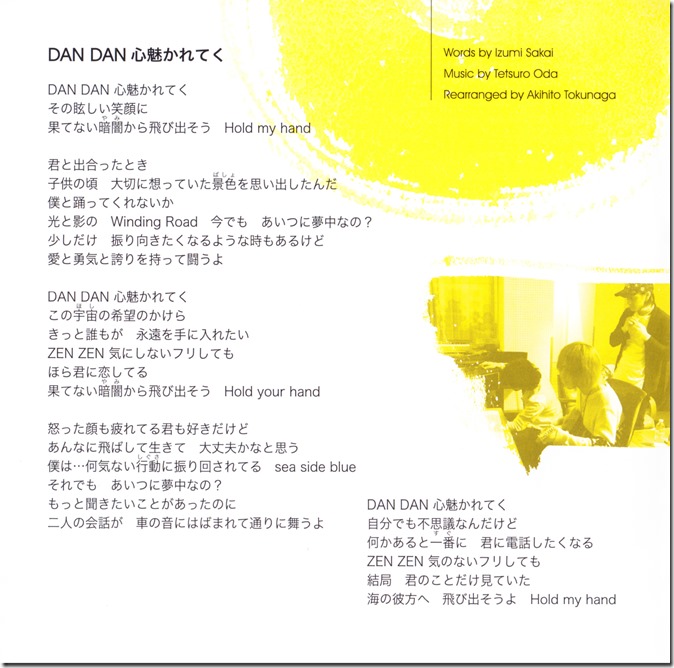 OMG the all new piano intro here is magical~*~~*!! And how it continues on with the opening and YES the drums and electric guitar enter just as expected and yet the rhythm and beat are sooooo different here! There’s like this underlying elegance happening to this song versus the rock emotions of the original… both great approaches of course! Guitar and piano take turns filling in those nice interludes and chorus background portions and the middle break is pretty awesome just hearing an acoustic piano solo go for it! Chimes….? =) Incredible piano happening here as we head to the outro and love how there’s even an added chorus backing it all up, very cool! And if you listen to the original just below this is about the time when ZARD went through a band shakeup where particularly the drummer was missed and so “Don’t you see!” has always had this drum machine sound about it when this single came out which kinda bothered me a bit and that’s probably what it is a drum machine… and so hearing this rearranged version of this song is really really wonderful. Love it~!~! 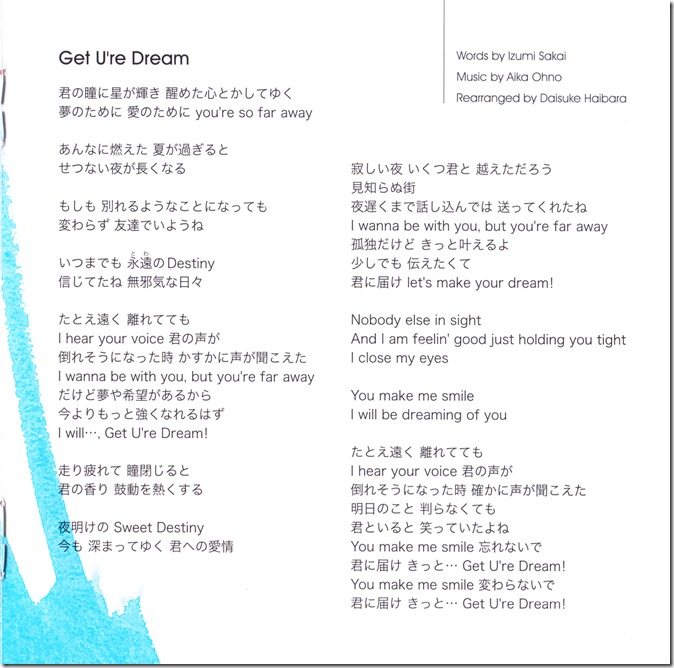 The song opens as expected and then it’s a total transformation!!!!! The guitar chords like a precise chainsaw cutting out notes in strict rhythm and all of the electronica enhancements and harmonies are very interesting and yet sweet…. and once again how about that bridge change as it becomes nearly dreamy all at once, then returning to its upbeat rambunctiousness all around. This song has such a different groove here, it’s pretty amazing as I “begin” to sound like a broken record and all =). 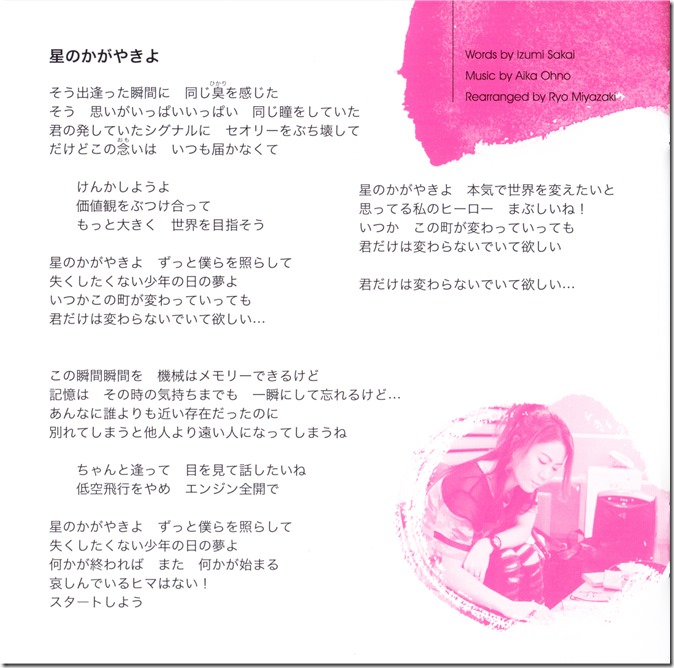 “Hoshi no kagayaki yo” ZARD d-project 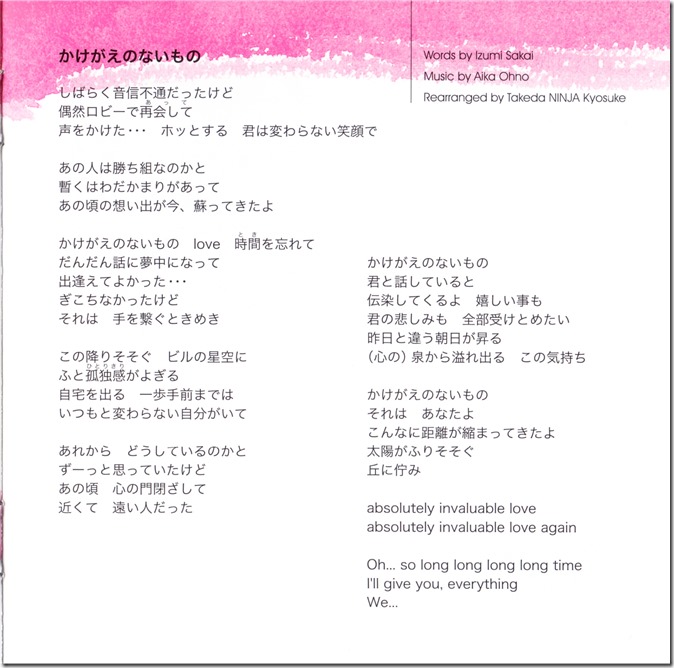 First it’s symphony~like as you clearly hear the chorus being serenated in grand fashion…. then a major cool transition to acoustic folk pop~py kicks in and you know I so love that! And YES by now you’re sensing it’s an instrumental rearrangement of “Kakegai no nai mono??”…. HOWEVER. It’s not =P! By the second verse we at last hear Sakai Izumi’s sweet vocals along with a full chorus backing her for the chorus portions. But then again it’s like an instrumental happening here again for just a bit although it’s for just an interlude’s time and how about that slide guitar here…..love it! The closing harmonies are nothing short of magnificent too in this context as this reimaging of a ZARD song, the original being a pretty straight forward rock~ballad…. this one truly took that definition to heart~. 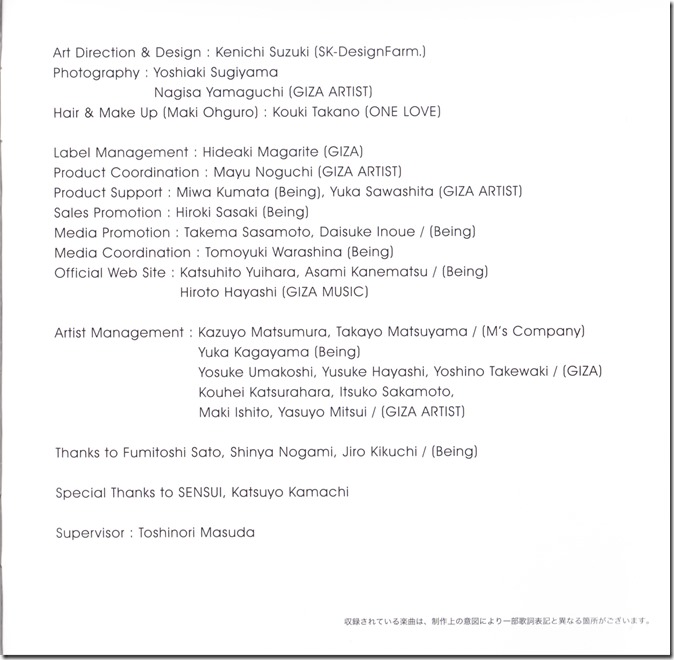 Now do note that my not including every song here isn’t in any way a reflection on those omitted songs for this post, as really those additional six tracks are well worth the listen, enjoyment and ZARD experience too~! I just wanted to leave a bit of something to look forward to if you do indeed purchase this album which I hope you do too ^^*. 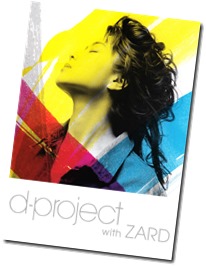 And for more on ZARD you can visit the following post:

Lover and free spirit who's interests in Japanese culture and the like are insatiable. I am of pure Japanese/Okinawan descent, love my cats, sleep and am a bit naughty at times :).
View all posts by MorningBerryz →
Gallery | This entry was posted in J~Pop, J~rock and tagged d-project with zard, j-pop, j-rock, ohguro maki, sakai izumi, zard. Bookmark the permalink.

8 Responses to d-project with ZARD