(Note: The Safari browser will not play videos here @ WordPress, both Google Chrome or Firefox are recommended for video playback here.)

Perhaps a rarity on the internet? I’m not sure but I haven’t been able to find it streaming anywhere so I’ve decided to share this drama directly in these posts. “Hyoten” also known as “Freezing Point” is a 10 episode drama series, this being the 2001 drama …not to be confused with the 2006 two-part “Hyoten” or the original drama series which aired way back in January of 1966 by TV Asahi which starred Aratama Michiyo and Naito Yoko and is noted as having been a success. This 2001 drama series aired here in Hawaii from September 21st, 2008 to its final episode which aired on November 24th, 2008.

So I’ll be posting each episode singly one episode per week every Friday …all 10 episodes here, and this being “Idols♡ Unzipped” on “way back Fridays” makes it a perfect match for this series of posts as former Jr. idol Suenaga Haruka starred in this drama series waaaaaaaay back many years ago. Due to the large size of this video file and my encoding program therefore not being able to omit parts of the video in a desired manner, I’ve chosen to leave the episode as it originally aired here with CMs included.

~A most brief “synopsis” as I don’t want to spoil any of this drama;s intrigue~

“Hyoten”, a drama which delves into the human psyche revealing the very depths of humanity’s darkness, jealousy’s scars …its dire consequences and to what lengths does emotionally charged revenge speak of? The young daughter of Tsujiguchi Keizo, a respected physician who runs his own hospital, is found murdered. Keizo secretly blames his wife Natsue because he suspects her of having an affair with his colleague Murai, and having been too distracted to keep proper watch over the child. Being a proud man, he does not accuse her directly, but concocts, instead, a twisted revenge against her. Pretending it is to comfort his devastated wife, Keizo arranges for them to adopt a baby girl. What he hasn’t told Natsue, is that the baby is the orphaned daughter of the murderer, a tragic day-laborer who has hanged himself while in police custody. He plans to reveal the child’s origins after Natsue has given her heart to the child when it will cause the greatest possible hurt, however….. 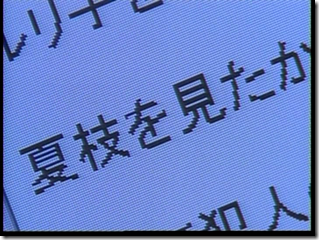 Lover and free spirit who's interests in Japanese culture and the like are insatiable. I am of pure Japanese/Okinawan descent, love my cats, sleep and am a bit naughty at times :).
View all posts by MorningBerryz →
This entry was posted in Idols♥ unzipped, Japanese dramas, Japanese idols and tagged hyoten, hyoten (2001), idols♥ unzipped, japanese dramas, japanese idols, suenaga haruka. Bookmark the permalink.