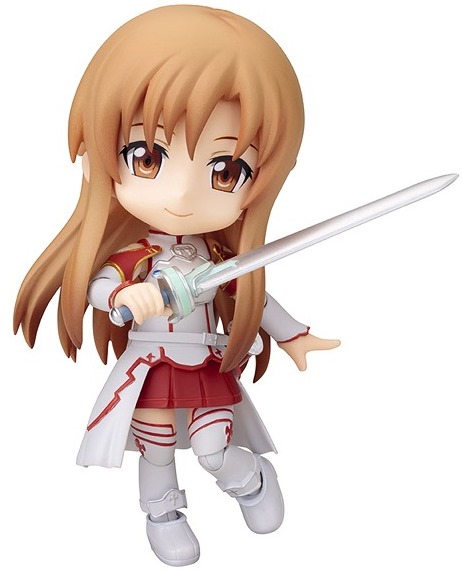 A few weeks ago on a late Saturday evening then nearing midnight or so I had been in a daze getting ready for be when while mindlessly channel surfing I came across and paused upon an anime, and while I had no idea of what I was watching or even the context of what was happening, somehow the lengthy dialogue by the character which I now know as “Asuna” as this turned out to be the very ending of an episode …..became a bit mesmerizing as it had to do with our lives and meaning. Now a few sleepy minutes afterward I had fallen fast asleep and honestly none of this would have really amounted to anything as by the next morning it was all but a fuzzy memory. The only thing sticking with me was what I thought was a most unusual anime title in “Sword Art Online.”

Flash forward a few days later, and a recently friended fellow blogger here @ WP Matthew (you can check out his wonderful WP site here!), had posted a very write-up on this very series Sword Art Online which I had just seen a glimpse of a short while ago. Call it destiny or something likened to it? Suffice to say as Matthew is deeply rooted in all things anime and with him being a true fan of the art of animated storytelling, his post(s) covering Sword Art Online featuring reviews and previews now had me fully invested in having a serious look! 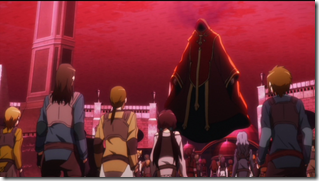 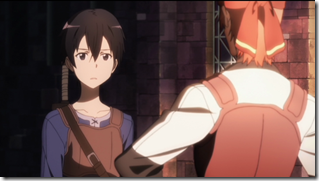 Now just above is the result as you probably know by now that anytime I get into anything I always invest in purchasing it as supporting the creative minds artists is a personal must ^^.  Now this being a “new” series to me saw the purchase of just this single DVD set so far titled “Aincrad Part 1.” The series appears to be done in “chapters?” and I’m just hoping to purchase them in the correct chronological order so as not to see anything not meant to be seen just yet as it would now only confuse but would also inevitably present some unwanted/ untimely spoilers =(. I’m going to shop for them a bit later as I write this up =). 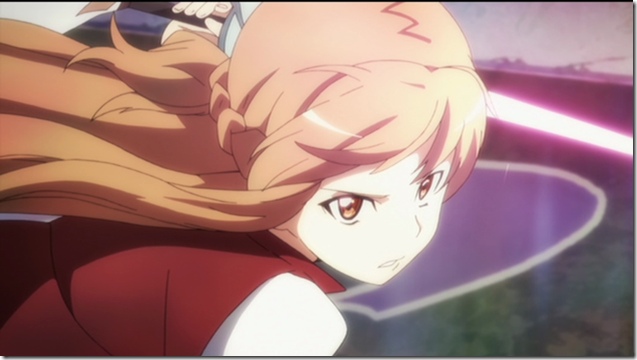 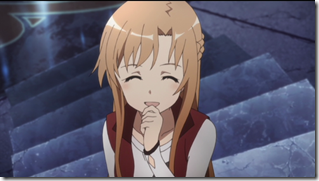 What really drew me into this particular anime initially was the entirely powerful and frightening premise of a virtual reality gaming experience becoming a person’s actual livelihood in reality where one ventures into a game with the anticipation of fun and excitement only to find themselves trapped in a virtual world and how if one were to “die” in this virtual world, where escape is impossible unless a player were to complete and conquer all of the game’s levels, they would actually die in real life outside. The genius in having everyone’s online/in-game appearance later resemble truthfully whom each individual is physically as a whole in real life is an underlying spark in how human behavior truly can at times hide behind an online mask, and likewise while online with your physical identity anonymous ….it speaks volumes on how every bit of that changes when you truly appear as your physical self in all honesty. What a person may do in an online world may be far from what they’re like in real life and there is much complexity to this topic alone but there is so much here to gush ヽ(。´▽`。)ノ。。！！ over so I’m just touching upon it here. 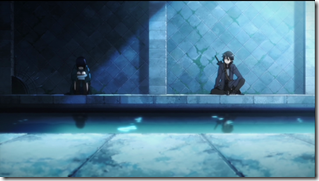 The dynamics in human nature while met with crisis is an essence of SAO which cannot be understated. How we can become a product of our environment leads some to act out darkly targeting fellow players (lives really) while others will use every bit of knowledge and opportunity to create for themselves thinking of no one else, and yet there are surely those pure hearts like with our favorite hero and heroine in Kirito and Asuna respectfully. Just the way SAO is presented makes for a surefire allure particularly for fans of RPG as its graphics, battle scenes (all incredible!!!), player menu nuances and the like make for what I can only call a DREAM ~* anime. And further deepening that allure has got to be namely in how SAO reveals character development as it manages to seamlessly peel away at the “online layers” of numerous main/ secondary characters as we witness and learn of their real world lives behind their online personas and how it affects their decision making, correspondences and personalities as the episodes unveil. The actual nuances and rules of the game-play, special items, weapons and the levels themselves are revealed in at times cool or rather dramatic fashion as well keeping the viewer wide-eyed at all times and a tiny bit of humorous sexual nuances to lighten the mood couldn’t hurt right? …as a couple or so blush* worth instances have popped up so far ^^.

And to think while trapped and living in this virtual world, your real life “outside” is likewise ticking away by the hours, days and weeks. And while I’m still very early into watching this amazing anime, it’s most interesting how some episodes surely turn out a bit more or less episodic, and how one just never knows of this as the story line and outreaching plots and character revelations all culminate in untimely endings for some with one such most heart wrenching and memorable episode being “Red-Nosed Reindeer” where surely I thought that Sachi would become a mainstay character in this series =(. OMG when her message crystal began, my tears were falling long before even Kirito’s hit the table. And now as each episode unfolds we learn so much more about Kirito and it’s always eye opening to learn of his ever deepening knowledge of the SAO game-world as a beta-tester and beyond, he’s just this most charismatic and attractive character and in Asuna I already favorite her character so much as she’s now quickly developed this almost militant~steely outer shell all the while there surely seems to be a much gentler and loving inner reality deep inside her which is yet to be fully revealed as I’m pretty sure of it being her true real world self! ^^ 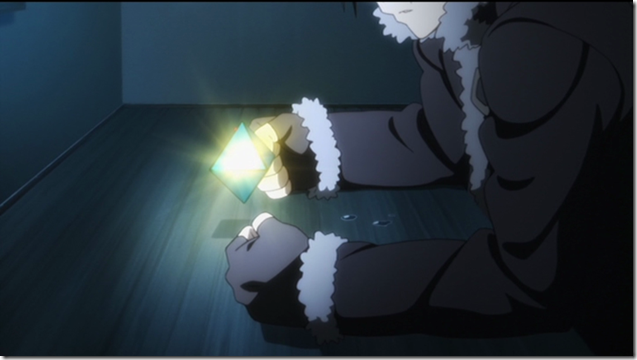 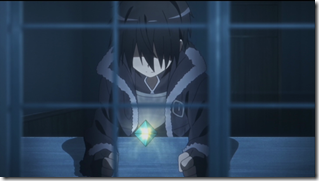 So my eyes and heart are firmly glued to SAO from this day going forward as I’d just completed watching this first DVD set in its entirety in one sitting …..ehhhh seven episodes just wasn’t enough（´∩｀*)！！！！So will anyone reach the final level completing the game conquering its only means of escape? And with that, how will the many eventually deeply rooted in-game relationships and newly found life-bonds play out in the real world when all is said and done? As with an online/ in-game persona one can choose to be whomever they want depending on how they want to be perceived, but on that same level of perception versus reality how will it transcend when and if their virtual reality world is no longer and one is truly thrust back in the real reality once again after so much time has passed? However I may be getting way ahead of myself here! But this SAO really does pose these questions through the underlying plot as well as with the character’s dialogue and there’s just so much to look forward to here!~!  And don’t even get me started about the opening and closing theme songs~♡!!!!!! As with dramas, theme songs can heighten the appeal level so much and here SAO has two most catchy and now firmly rooted in my heart songs (*´∀｀*) ♪～♪。I’ve already ordered a couple of figures those being of, of course Kirito & Asuna, Kirito is just awesome beyond words!! and Asuna you just know she’s going to be this incredibly complex, powerful and YES already adorable girl! ….and so now getting those theme songs will without question likewise be on my to do list…_〆(・∀・＠) ！So next I’ll be ordering the rest of the DVD sets which are available and to say I’m absolutely hooked? Well let’s just say that that’s an understatement っo(*´∀｀)o！So I see that there are 25 episodes in all? International titles confused me a bit with the term “arc” being used instead but all in all I’ve now ordered “Aincrad Part2”, “Fairy Dance Part 1” and “Fairy Dance Part 2” an “extra edition??” ….but I also see a SAO part II with episodes 1-7 and SAO Part II with episodes 8-14 which is releasing in just four days!! Am I a complete nut to be getting them all at once?? Okay! =) 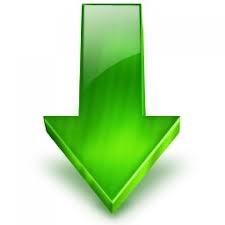 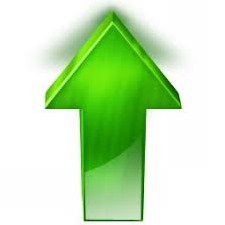 Kinda pricey but I say OHHHHH SO WORTH IT!!!!! 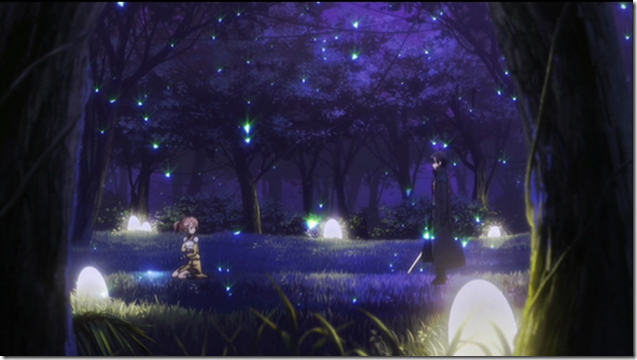 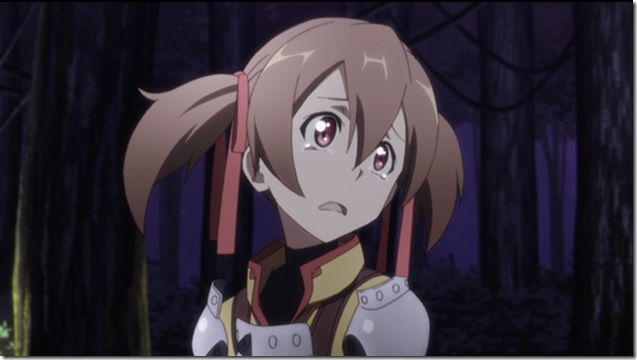 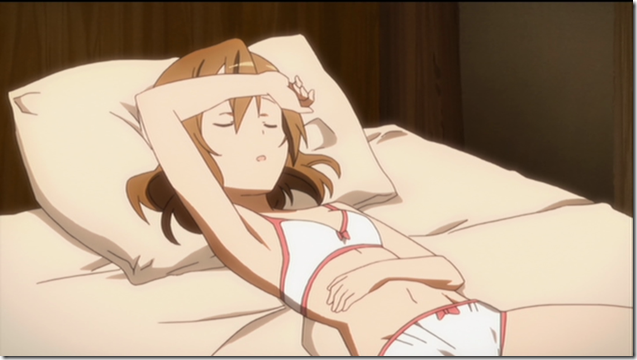 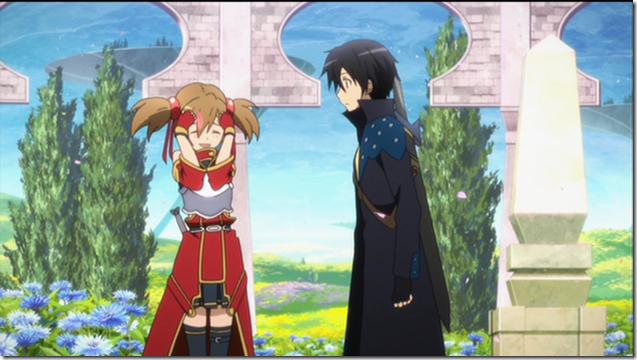 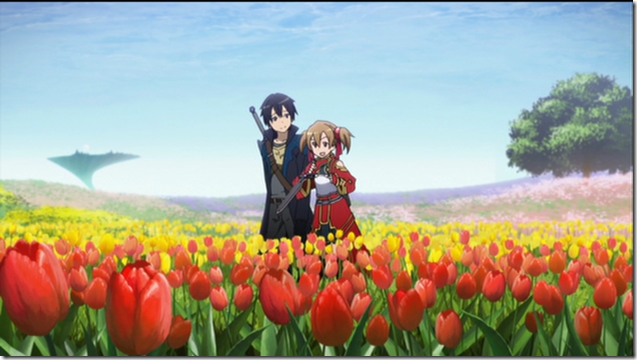 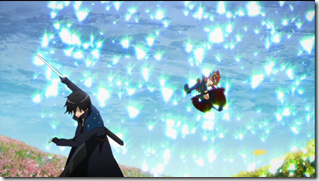 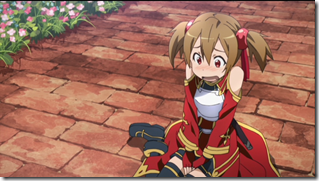 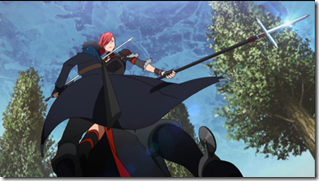 I honestly haven’t watched any “new” anime for some years now so SAO is a timely wave of fresh air getting me engaged once again in an art form of storytelling when done just right …..is as good as anything for your eyes, ears, heart and soul~ ^^.

Lover and free spirit who's interests in Japanese culture and the like are insatiable. I am of pure Japanese/Okinawan descent, love my cats, sleep and am a bit naughty at times :).
View all posts by MorningBerryz →
This entry was posted in Anime and tagged anime, asuna, kirito, sword art online. Bookmark the permalink.