Posted on 2014年9月5日 by MorningBerryz

Happy hot and humid and awfully sweaty Aloha~♥ Friday ヾ(＾∇＾)！！This segments been away for awhile stuck in a hiatus state but for at least this Friday here’s another Unzipped♥ entry =).

..but have you heard of Kamei?

Classic artists don’t come around very often however there once was an idol whom wielded bristles of gold!

Kamei with “The Cat.”

Take note of this early masterpiece! ^^ Notice how the cat’s body is shaped like an overgrown jalapeno. The legs with no paws, strange eyes, and what appears to be a collar around its tail. All signs of expensive art. =)

And it’s not your imagination…the cat’s eyes do follow you no matter what angle you look at it from. Move around the room…try it! Magnificent! The Mona Lisa’s got nothing on “The Cat!”

Kamei with “The Cat.”

While it’s unsure how much this piece of art is worth, it’s known that none of us can afford it and when it went up for auction Bill Gates was somehow out of town that week?? What are the odds? =P

And here’s just a tad bit of Kamei photo nostalgia just because she’s so cute and infinitely adorable all bundled up along with one of the best personalities the idol world has seen to date. I’ve adored you every step of the way! 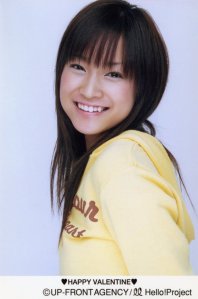 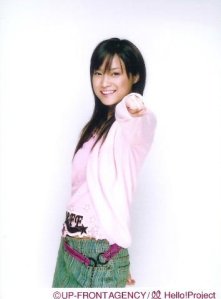 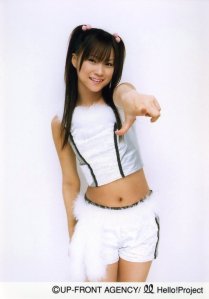 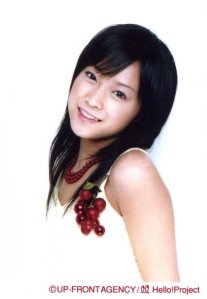 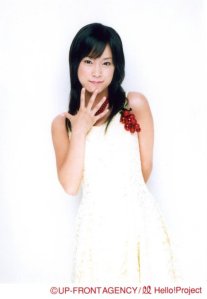 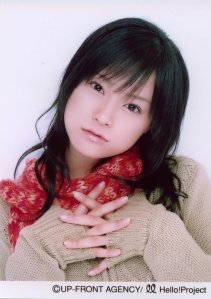 February 25th, 2007….a great time for Momusu/H!P as Mikitty was still in the group and Yuko still a presence in H!P, and really they’re two of the most strongly willed, personality-charged and charismatically dynamic members all time for the idol franchise in my humble opinion ^^.

In today’s main segment there was an interesting blend of music and drawing. Ever had a choir sing the description of what you’re supposed to be drawing? Probably not, well unless you’ve been on H!M as the producers never cease to come up with the most interesting games. Some of the members had a difficult time following the sung directions and understandably so as just thinking about it seems a most daunting task to partake. And you’re only given a broad category as a hint to begin with and in today’s segment, animals and anime characters were used. The drawing then becomes an adventure all it’s own depending on how much you understand of what the choir is singing and the drawings were quite interesting today ^^! First up in the animal (doubutsu) category is monkey (saru) and secondly during the “Lion” drawing segment Mikitty has a “kimochi warui” feeling when she sees Kamei’s drawing where Kamei says it to be an “owl” (“fukurou desu…♥). And note the cute look of anticipation on her face as a new drawing of hers is revealed and the staff and fellow group members are getting ready to laugh =P.

I’m thinking that we all can probably remember exactly where we were in our lives when we heard Kamei first declare the existence of a world all her own….remember “….Eri no world…?” Well I do wonder what sort of freaky~weird owls are living there?? (゜Д゜;)！！I think I’d like to live in Eri no world, sounds like a fantastic place.

Okay so after each girl’s drawing is revealed and critiqued those whom got the theme correct are noted and given a point as you surely know there’ll be goodies to be awarded come segment’s end where one lucky girl will indulge in a dessert =). And Yuko also performs the drawing correctly as dictated by the choir after each reveal. 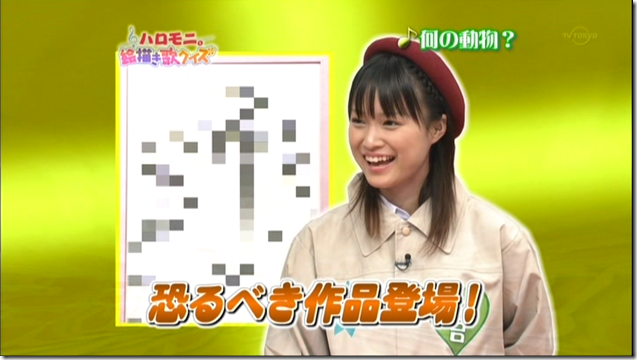 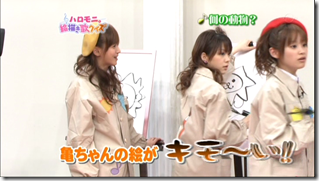 Next up is the anime character theme and Yossi right off the bat has some mischievous thoughts of her own which she ‘shares with the class’….=). Love how Aichan’s already freaking out her next door neighbor Reina (gasp!) with the early stages of her drawing and take note of Kamei’s confused expressions…

it’s the true sign of an artistic genius =P!! And Kamei’s (Keroppi) is um……… (￣▽￣)♡。You’re getting the feeling that Kamei’s going hungry on this day aren’t you =O. Shame! Kamei’s art was just ahead of its time, you know, misunderstood as they say =). Hmmm..it’s like I see a “Kamei”, briefly wonder what is it, realize I don’t know…but so know that I want one ^^. 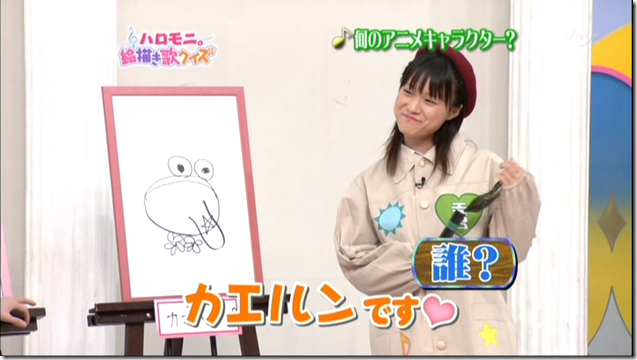 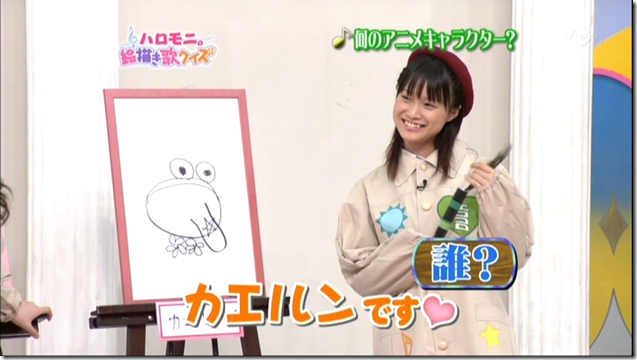 If you’ve wathced H!M for any length of time then I’m sure you’re likely aware of Kamei’s “artistic talent.” She can’t draw. She was once held back by herself after the segment was over after being given an artist’s set as a gift for being the worst in hopes of her getting better but it hasn’t helped as we see on this latter day. And even considering today’s difficult situation her drawings are simply odd…..as in oddly~fantastic ー(*￣Ｏ￣)ノ！ That’s just another reason that I adore her. And be sure to check out H!M episode 9/12/04 to see Kamei bring a whole new meaning to drawing…or perhaps I could post that next week? 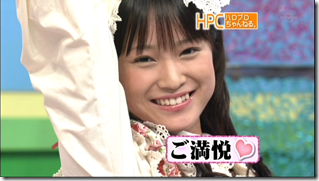 Now for my favorite segment from this time period, HP Channel. It’s great how Kamei can be original in the funniest of ways every time you see her in this segment as “Elizabeth Kyamei” and honestly I had to rewind and watch it over and over when Kyamei spelled her name incorrectly, albeit in English it was hilarious nonetheless (。ーωー。)笑！ Kyamei with guitar singing kind of seductively… she never ceased to amaze me with her comedic charisma from episode to episode =). And this was really nostalgic for me seeing Yuko behind the desk once again as it’s like the planets had aligned correctly once again as the universe intended. Reporter “Risha” Niigaki is in again this week for Pinky Koharu who is still on vacation and she’s perfect in this role as well but I remember thinking we need Kohachan back =P. Guest Yuichan goes up against Mikitty (after she is untied, the work of Yuko?!!! heh heh) in a game of maraca frenzy using a stepping meter to determine the winner. And to see Mikitty perform this act, simply priceless ^^. 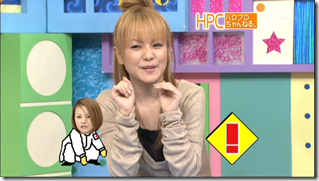 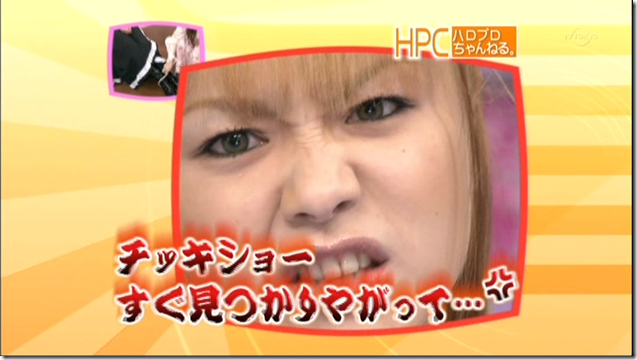 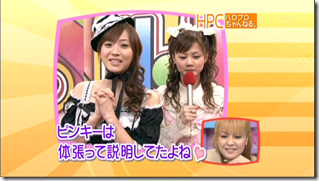 Lover and free spirit who's interests in Japanese culture and the like are insatiable. I am of pure Japanese/Okinawan descent, love my cats, sleep and am a bit naughty at times :).
View all posts by MorningBerryz →
This entry was posted in Hello! Morning, Hello! Project, Idols♥ unzipped and tagged hello! morning, hello! project, idols♥unzipped, morning musume. Bookmark the permalink.