Posted on 2014年8月26日 by MorningBerryz 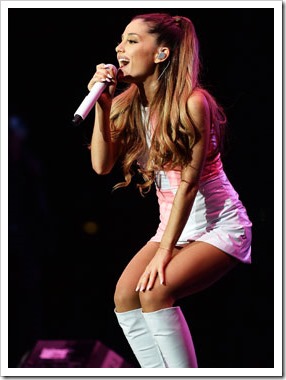 Just released yesterday!!!…it’s Ariana♥Grande’s sophomore album and I just purchased it from iTunes and it’s awesome to hear her develop in further leaps and bounds with this vocally charged pop masterpiece!!…and this just her second full length effort. 13 new tracks to love as a fourteenth is a brief intro with the fifteenth being her smash we all know and love in “Problem” and it must be emphasized in just how talented her entire production team proves here with dynamic track after dynamic track with strong song writing throughout. Still it’s no doubt Ariana Grande’s voice which continues to stand tall as we are further witnessing her awe inspiring range, immaculate touch and vocal nuances which are nothing short of outstanding in every regard. Sure it’s very early in her most promising career and yet I’m not shying away from envisioning her ascent into the upper echelons of once in a lifetime vocalists beside the likes of Mariah Carey and Celine Dion to name just a couple of most accomplished artists whom own pipes of gold~.

~Ariana Grande’s 2nd album “My Everything” can be purchased @ iTunes~

And released earlier this month, a teaser from “My Everything”…. ”Break Free” may be a well…break up song but you may not even notice it readily as there’s an infinite amount of eye candy goodness happening here in the form of Star Wars meets Star Trek meets you know those classic Japanese super robot icons…those which projected at times body parts in order to destroy the enemy like with Raideen whom has the chain punch…..however here think super Ariana♥Grande~breast~beam~~~>!!!! Sure it’s been done before and yet never has it been so sexy!!!!! Ariana’s various wardrobes here are off the charts both creatively and sensually speaking so let’s just say that this is one pv in which you won’t be able to take your eyes off of for even a second ^^.

Not sure of what her country fans will think but with Taylor Swift’s announcement of her move to pop for her upcoming album “1989” however if “Shake It Off” is any indication then we’re certainly in store for a most yummy Taylor~treat coming in late October!!!

Let me just say this. Whether you love her or have no strong opinion either way about her music up until now, if you watch this pv it’s really unlikely that you won’t be swept away by just how much FUN this video absolutely is!!!!!!! And with a pop side of Taylor Swift we’ve never seen before it’s refreshing times a zillion and while honestly the jury was out for a short while about this song for me personally upon first hearing it this past weekend it didn’t take very long for me to LOVE it!!! So if you watch just one video today be sure to make “Shake It Off” the one as it’s cute and giddy fun at it’s very best and it’s sure to put you into a much happier mood….and with all of the dynamic and colorful choreography with mischief abound and not to mention the much varied wardrobes of Miss Swift, it’s Taylor herself who’s channeling an adorableness dare I say which is even on the near equivalent of J-Pop cuteness♥ and creativity in its finest hour luv LUV this music video and song!!!!! ^^.

By far my favorite slam to watch as it’s on hard courts which I can relate to personally as I’ve never had to opportunity to play on any other surface sadly, and it’s also the time it’s on t.v. which is perfect for viewing live as I don’t need to stay up till 11 pm or awake at 2 am to watch and those iconic late night marathon matches are simply like nothing else…. also it’s the rowdy N.Y. crowds which are often times loud/animated and truly like no other and with ESPN the television coverage runs all morning long which continues into all day long coverage and then into the night sessions daily so it’s pretty much tennis watching euphoria all around ^^!  (Honestly was that like the most messed up run on sentence? =D) On a sad note Nadal is out with an injury as is Li Na but I’ll still have the likes of Ana Ivanovic and Roger Federer to cheer ~* on but no matter who’s playing I guess you could say that I’ll be most preoccupied with tennis for the next couple of weeks! =)

Lover and free spirit who's interests in Japanese culture and the like are insatiable. I am of pure Japanese/Okinawan descent, love my cats, sleep and am a bit naughty at times :).
View all posts by MorningBerryz →
This entry was posted in Ariana♥, MorningYolk, personal, Uncategorized and tagged ariana grande, morningyolk, my everything, personal, shake it off, taylor swift. Bookmark the permalink.