~Fuzzy Memories…”SmapxSmap Bistro, the one where Miyazawa Rie makes you hungry.”

Posted on 2014年3月5日 by MorningBerryz

Okay it’s time for yet another posting of Fuzzy Memories as it’s been awhile since I’ve done one of these and so firstly let’s reiterate a tiny bit what exactly a fuzzy memory is =):

Looking back into the vaults (aka: my olllllllllllld VHS =P) this series will take a look @ some fuzzy moments~* via a VHS~~>Digital transfer and there’s something definitely warm and fuzzy about these…the fuzzy coming from some of these clips being 2nd or 3rd generation+ VHS dubbed transfers originating @ our local Japan rental shop of yesteryear all prior to the digital age, I hope you enjoy =P.

Ah the extreme fuzziness at the very opening only lasts for a second or two there and then it plays well about as normally as an old VHS third generation copy to digital copy can play =P.

So today we’ll be traveling waaaaaay back in time back to August 18th, 1997 when gorgeous model/actress Miyazawa Rie made a special guest appearance on SMAP’s Bistro segment. If you’ve been watching the SMAP Bistro episodes I’ve been posting here prior then surely you’re most familiar with this corner’s format but basically SMAP Bistro pits the guys into two teams of two each while Nakai~kun plays host for the restaurant’s guest of honor. This eatery features no menu so the guest may order whatever they’d wish ~* to their heart’s content to which Nakai~kun will relay the order to the guys below in the kitchen preparation area. Some episodes utilize a timed countdown for the cooking but today’s episode is of the standard type so while Nakai~kun interviews/ entertains the guest of honor the two teams prepare to battle in a cook off of sorts and today’s teams are Team Red which are Kimutaku & Goro against Team Blue which are Tsuyoshi & Shingo-kun. Miyazawa Rie chooses an ingredient rather than a specific dish here and it’s cabbage which holds a special sentiment and taste for her which she reveals as being a favorite in her family’s cooking. Now if you’ve not seen the guys cook before, it must be stressed just how gourmet able they truly are and while surely there are episodes where the guest(s) may request dishes of a simpler make-up, make no mistake that the guys of SMAP can cook with the best of them, no kidding!! So with cabbage the possibilities are pretty vast as you’ll see in their carefully crafted dishes and they also make their own desserts from scratch too, yes there’s an ice cream maker on set as well =)!

As you follow the conversation above between Nakai~kun and Miyazawa Rie you’ll soon realize just how familiar and connected Kimutaku in particular is to Miyazawa Rie as YES they have quite the history together with acting together being one facet of their friendship (they had just acted in the drama “Kyosokyoku” the previous year) and Miyazawa~san also goes on to reveal one of her favorite roles of his, that being his legendary impersonation of one Tamura Masakazu in his most iconic role of “Furuhata” in the vastly popular detective drama series. Also the aforementioned drama “Kyosokyoku” actually featured all three in it with Kimutaku, Miyazawa Rie and Tamura Masakazu all tied into a love triangle. You’ll also notice that Miyazawa~san is a regular fan of the show SMAPxSMAP as she gets a special “sankyu you Goro…” skit moment as she visits the kitchen area at about mid segment =). There’s particularly a lot of humor flying throughout this entire episode and Miyazawa Rie is so playful and candid with the guys so keep sharp on the dialogue as some of the jokes and inside out ones come quite quickly…(^q^)!

Now, you just have to witness her eat!!! I mean she makes eating appear as an art form as Miyazawa Rie is so so classy really defining the word lady to a tee! She’s long had a most glamorous appeal and aura to her very being in the way she presents herself, speaks, walks and really just in every way and here you’ll get to see how a truly beautiful lady eats…I’m not kidding just watching her makes food look that much more delectable (*´∀｀) うれしー♥♥♥！

Okay now that I’ve wiped the drool away (*≧▽≦)、．．．each Bistro segment concludes with the guest of honor having to make the difficult decision of needing to choose between the two teams based on which dishes collectively they enjoyed more きゃぁーっっっ(/∇＼*)！And to the winning team goes the spoils of either a kiss from female guest(s) or a special gift/ handshake from male guest(s). I hope you enjoyed today’s Bistro episode and gosh*……she eats so beautifully doesn’t she ………(゜∀゜)………。！！！～！！ 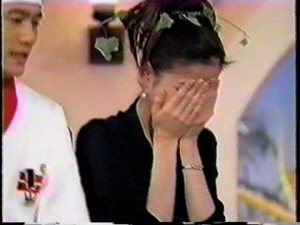 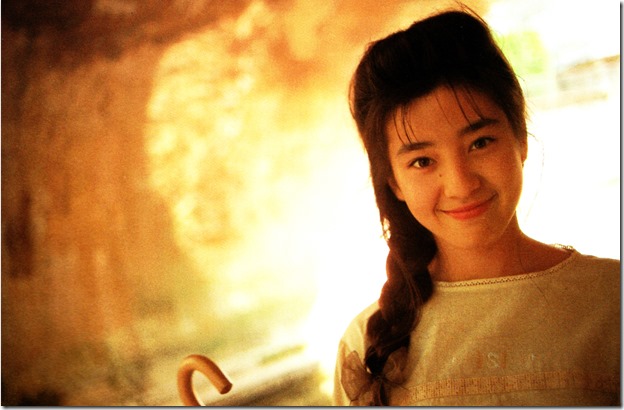 (the following below was previously posted on March 15th, 2013 under “Idols♥ Unzipped vol.37)

At first thought I was going to link this additional post here covering Miyazawa Rie further but then I just figured I’d merge these two posts together instead making it a bit more convenient to read/ watch through ^^.

Miyazawa Rie born on April 6th, 1973 is best known for her acting career which spans from film to numerous television dramas also including various theater works. She also began modeling professionally at the very young age of just eleven years old and would go on to becoming one of Japan’s premiere glamour models appearing in a vast array of Commercials, magazines as well as her very own shashinshuu collections. For me personally Miyazawa Rie hit on radar via her television dramas where she once acted beside simultaneously two generations of Japanese leading men in the drama “Kyosokyoku” (“Concerto”) alongside Kimura Takuya and Tamura Masakazu, also in “Kamisama mou sukoshi dake” with Fukada Kyoko and the always gorgeous Kaneshiro Takeshi and for a long running series drama there was “Musashi” as well as a few notable others over the years for me. For anyone who’s been familiar with

her presence and demeanor I can totally liken her beauty, grace and elegance to that of the high praise of Audrey Hepburn, for her class, poise and femininity are none short of immaculate with a natural beauty seen not much more than a few times in a generations length. That’s not to say that her life has been that of pure roses as numerous times her presence in the media has been that of controversy ranging from her short engagement to then sumo great Takanohana, a release of a nude book (a post best suited for another day as I do have access to this book), a suspected suicide attempt as well as her longstanding fight with anorexia over the years. Still Miyazawa Rie remains as one of Japan’s most celebrated beauties as from magazine covers to your television she’s forever cemented in the celebrity of this generations past. 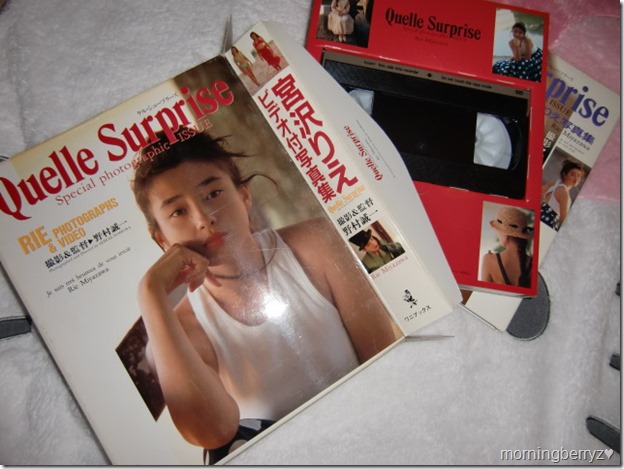 For this evening’s Idols♥ Unzipped I’ve chosen to open up one of Miyazawa Rie’s earlier photo collections titled “Quelle Surprise.” I found this rare box set at a local used book store years ago while perusing their shelves and it all came very unexpectedly as I’d then only known this cover from old out of print catalog images and never imagined ever seeing an actual copy of it so available at just an arms reach. Also remarkably the box set I collected is in quite great condition and all of its contents appear to be present including a photo book, thick outer casing, VHS compartment, VHS itself (yep it’s that old!!) and a single sticker sheet which remains completely unused. As you can see just below, the sticker sheet is actually designed to decorate the VHS casing and now how nostalgic is that =P! Yes VHS stickers for both spine and top label surfaces and they’re cute too, with Miyazawa Rie gracing all images and title descriptions =D. 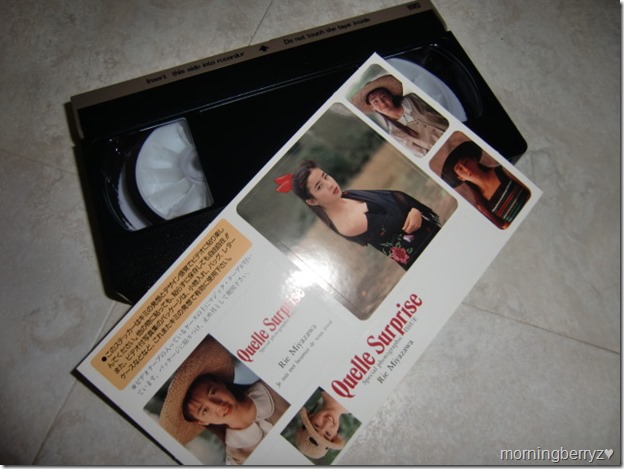 However first, let’s take a little listen to…you guessed it! a bit of her J~pop career as we all know so well how idols almost always inevitably whether of the past or present will so often venture into the music industry as their talents call for it…or well at least to add a well rounded idol resume stature to one’s own professional craft.

Miyazawa Rie’s J~Pop career began in the lat 80’s reaching into the early mid 90’s and for this facet of her life it’s 100% idol born and while her vocals overall aren’t on the remarkable side it speaks volumes that she was signed by music giant Sony back then and the production of her singles and albums were quite well done, although that’s not to say that this time period in musical history does note its vast amounts of musical direction which let’s just say…..remains time capsuled or dated for lack of a better term and somehow or another hasn’t been blessed by time like pretty much every neighboring decade has going both forwards and backwards from then said 80’s~> mid 90’s. Much of the instrumentation’s sound as well as the styles then are frozen in bubblegum pop representing the big hair era so here I’ve chosen three songs in particular which I feel that have been just a bit more successful at fighting father time and maybe escaping just a little bit of that oh so dated feeling.

“Kokoro kara suki” represents a bit of jazzy~pop for this time era and Miyazawa Rie’s vocals are quite solid and sweet although as aforementioned not remarkable and yet she surely is most capable of capturing the nuances and beauty of a song. This song was also the ending theme for the tv drama “Tokyo Elevator Girl.” 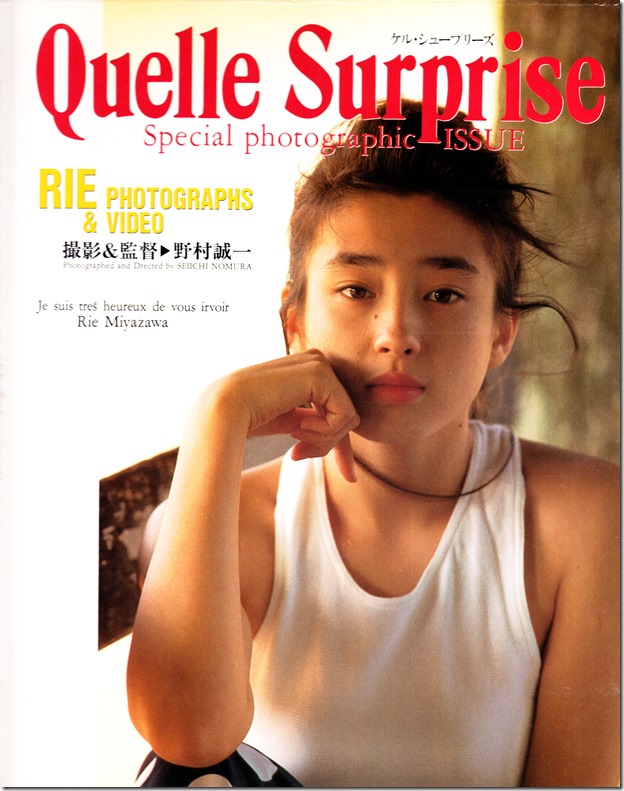 Now getting back to her photographic box set “Quelle Surprise”, I’ve chosen a few favorite pages to scan from the shashinshuu as well as including the video clip from the VHS. To my happy surprise the VHS here wasn’t macrovisioned so I was able to transfer it to DVD today and while you know VHS didn’t have the most enviable resolution I think it came out pretty well and also note that this very very old VHS from a previously owned box set plays perfectly without running lines or naughty break ups in video quality at any point which is really pretty remarkable especially for anything used with a high tendency to self~degrade over time. 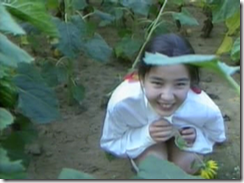 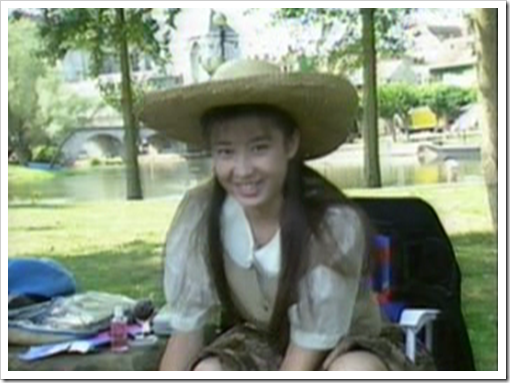 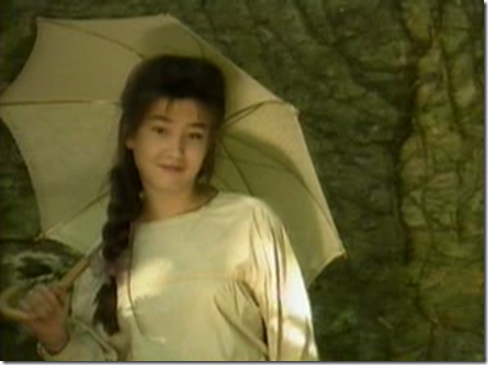 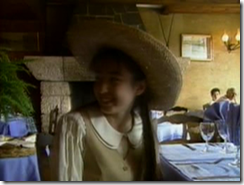 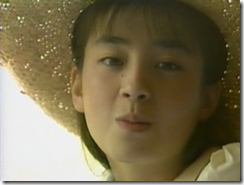 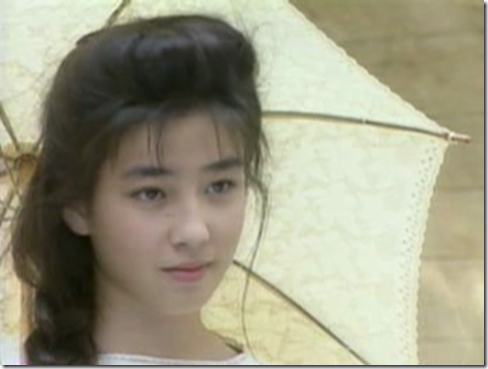 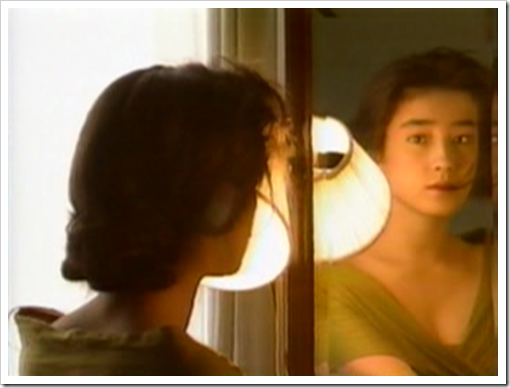 Keep in mind that this pictorial is from an early age as Miyazawa Rie’s looks only grew in beauty in the years to follow during her vast modeling career….her gracefulness in self demeanor as well.

In a future installment of “Fuzzy Memories” I’d like to include her visit to the SMAP Bistro program which I’ll transfer to DVD as well, along with perhaps more photo book pictorials depending on the reaction this posting receives. 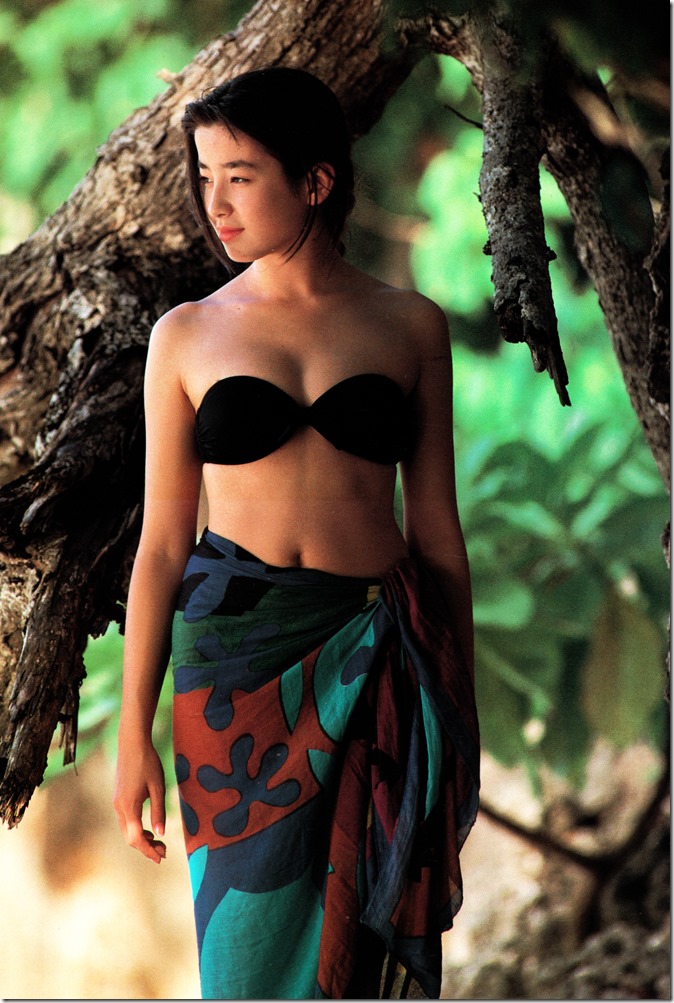 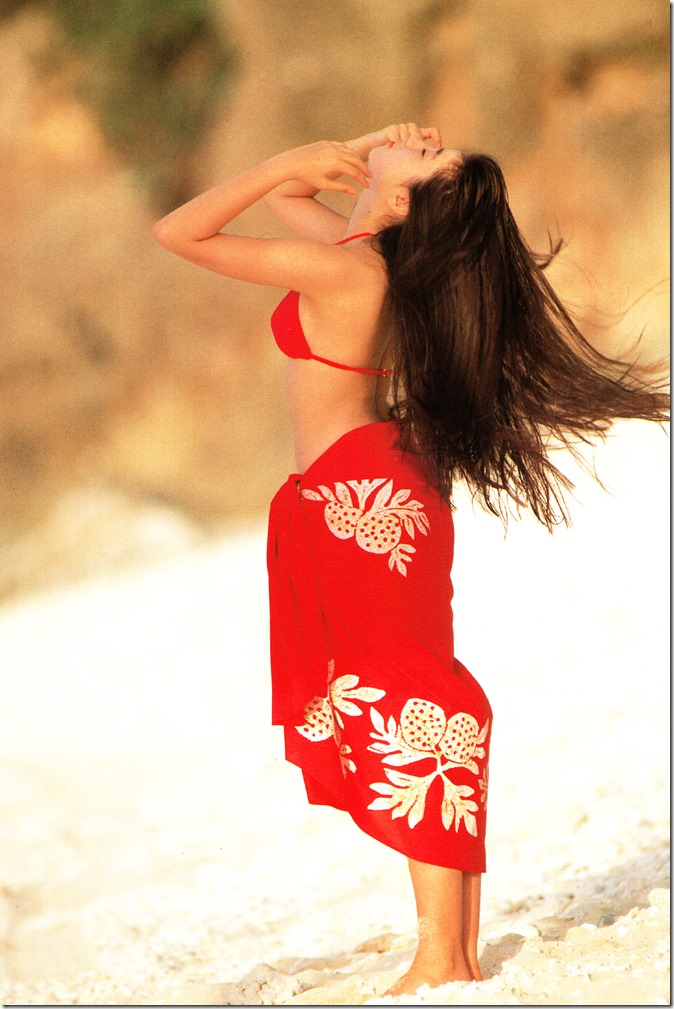 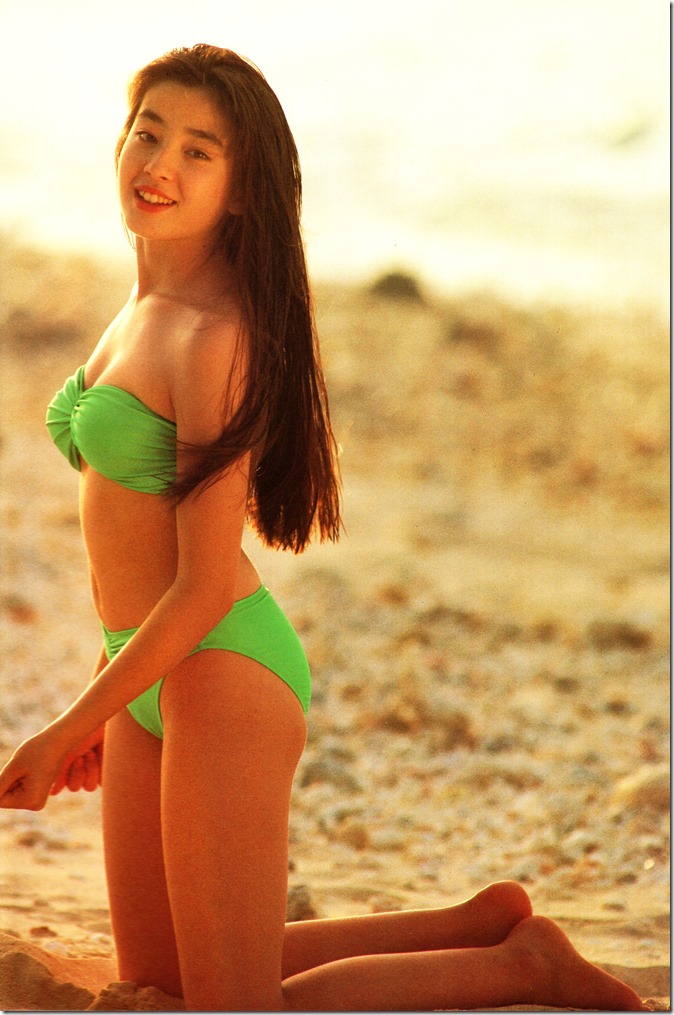 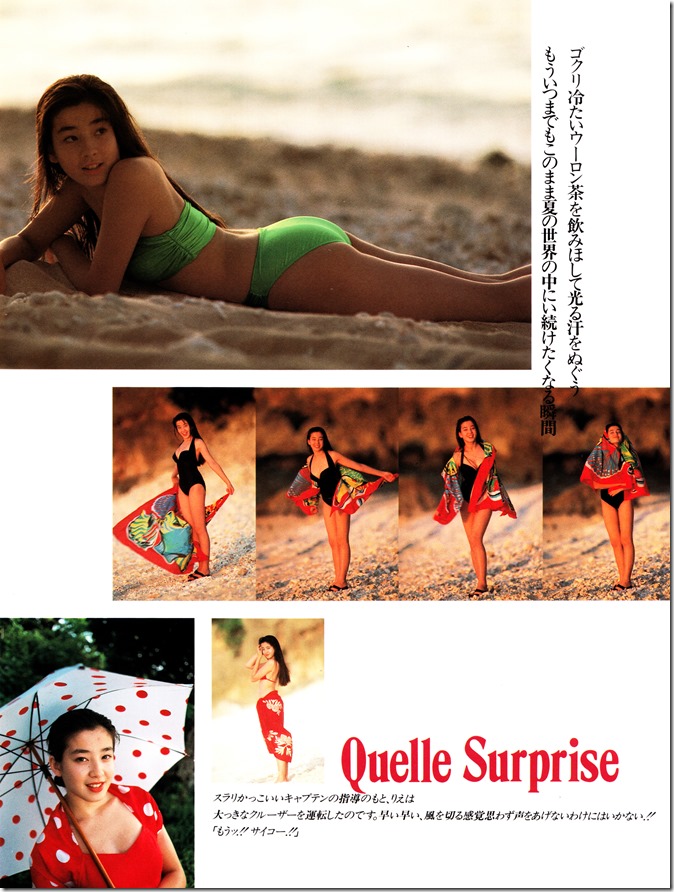 2 Responses to ~Fuzzy Memories…”SmapxSmap Bistro, the one where Miyazawa Rie makes you hungry.”