Posted on 2013年5月17日 by MorningBerryz

Ever had a crush~♥ on a celebrity? And that celebrity just happens to be a member of a most popular band? Well for Nagasaku Hiromi who’s best known for her modeling and award winning acting in both movies and dramas, that celebrity/ band member crush came rather in the form of celebrity crush  on celebrity as Nagasaku herself is pure celebrity! And that band member I’ve mentioned? Well it was none other than Mr.Children drummer Suzuki Hideya!! And this coupled relationship was happening way back in the latter 90’s and into the early millennium and from an interview from back in those days I read Nagasaku Hiromi expressing the details of just how they happened to meet originally. Well it seems that Nagasaku had a crush on the man bashing the skins for Mr.Children and actually went to attend a concert which just happened to create the venue of their very first meeting! And while Nagasaku Hiromi’s now happily married to another, it’s still nice to reminisce of just how thrilled I was back then to learn of such a chance encounter which began with just a crush but became so much more in a sort of fairy tale aura of ways….as you just never know as your crush may indeed return those feelings you’ve secretly had till then and being cute like Nagasaku all she needed to do was show up~. Just a little sweet memory that I thought I’d share with you as you most likely already know of my insatiable Mr.Children♥ appetite and it’s also a perfect reminiscing for leading into tonight’s Unzipped♥.

The photos atop and just below are scans from my copy of Nagasaku Hiromi’s “UK. ASAGAN” shashinshuu which I imagine is a bit of a rarity these days and that in finding a new copy. This photo book published by Bunkasha which is known for their let’s just say…spicier style photo books was released on May 1st, 1997 and that coming just a few years after the break up of idol group Ribbon. 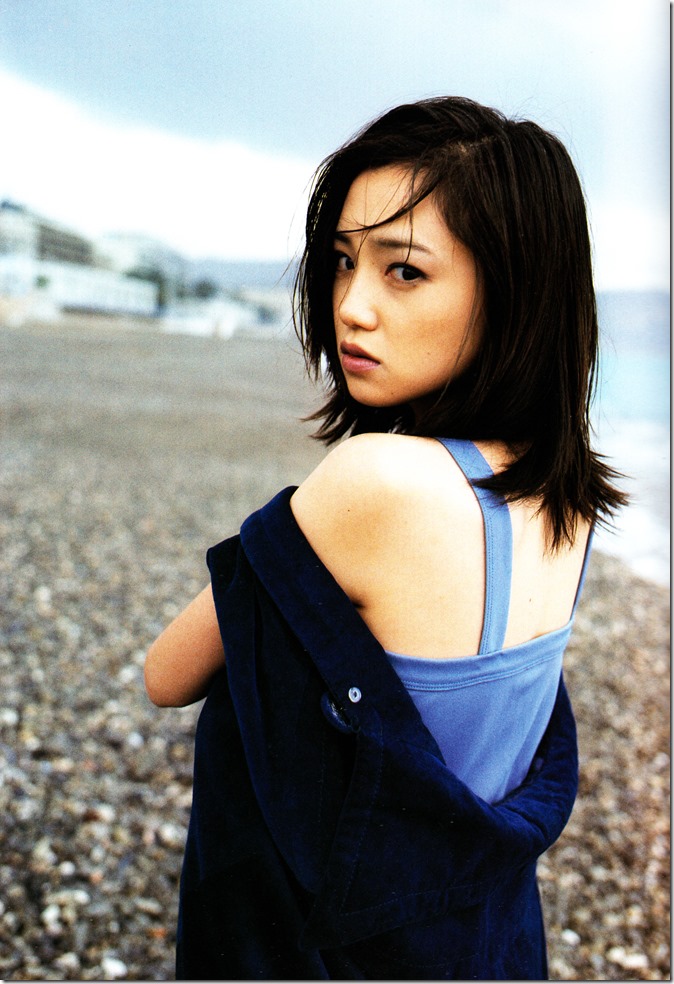 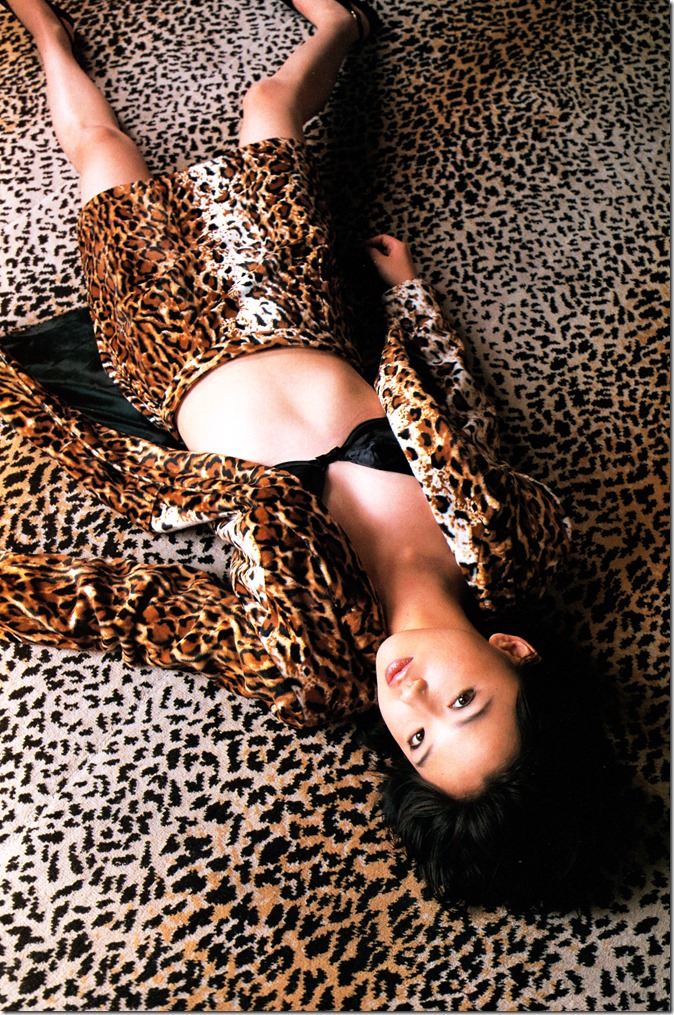 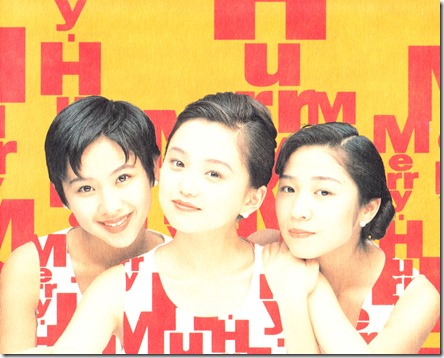 Ribbon was the sister group to CoCo dating back to the origins of the legendary Otomejuku idol projects as both groups debuted in 1989 becoming two of the most popular idol groups into the early 90’s.

Through auditions Otomejuku was born and from it expanded the creation of both groups and solo acts and while CoCo was indeed the cutesier produced and presented of the two main group acts, Ribbon became known eventually as the much edgier and rock~n~rollin’ of the two as many of their singles and album tracks moved from pure~j~pop into pure~j~rock into the latter years of the groups’ discography.

Ribbon was a trio of whirlwind talent with Nagasaku Hiromi (above center), Satoh Aiko (left) and Matsuno Arimi (right) creating a tour de force of vocal talent which saw equality on all levels as each could easily hold their own and appropriately the vocal lines distributed very much in the same manner with none being a central member for that matter. Hiromi, Aiko and Arimi also possess such vastly unique tones and nuances in their voices that identifying each of their solo lines becomes quite the simple affair after learning just a few of their songs over a short period of time and speaking of vocal ability, the trio of Ribbon till this day I believe remains as one of the most talented and impressive.

“Be My Diamond!” was released on April 7th, 1993 and was the second to the final single the group released. This song is within my all time top 15 J~pop favorites♥, really I think it’s that perfect and memorable and of course that catchy! And while I did mention the central member format being a non factor for Ribbon it does appear in a rarity for this song as Nagasaku Hiromi takes the chorus solos throughout the song and Yes!..her voice is the most sultry of the trio as you can clearly hear in this single performance! I’ve always loved the way this video was edited and shot with each girl on the outer reaches of the circular stage facing outwards and the inclusion of the play footage is pretty priceless too! “Be My Diamond” is one of the sweetest melodies you’ll hear complete with a nostalgic wink to the past in its shoo~bee~doo~bee~doo~wops♥ backgrounds and just the way that this chorus builds up so gradually and melodically perfect, it’s not unlike a musical~note orgasm* when Nagasaku Hiromi starts hitting those ever so strong and heartfelt lyrics “….itsuka kitto….”

And Yes! both songs here without question have received the ‘coveted’ =P Maochan Music Seal of Approval ＾＾。

“S”ENSATIONAL WIND was released on September 2nd 1992 and was Ribbon’s 10th single release. “S”ENSATIONAL WIND is also a member of my all time top 15 J~pop favorites♥!..and for all of the very same reasons mentioned just prior for “Be My Diamond!” This song’s composition structure is just awesome!!! Love the classic ‘beach’ styled guitars and the way the bass thumps and jogs into a perfect driving rock cradle beneath it all, and as always with Ribbon, the girls’ voices here so immaculate in both harmonies and solo throughout! This video’s really cool too as it was shot with a camcorder look for much of it and you can really learn Hiromi, Aiko and Arimi’s personalities as this music video is pure candid fun all the time x’s ten! 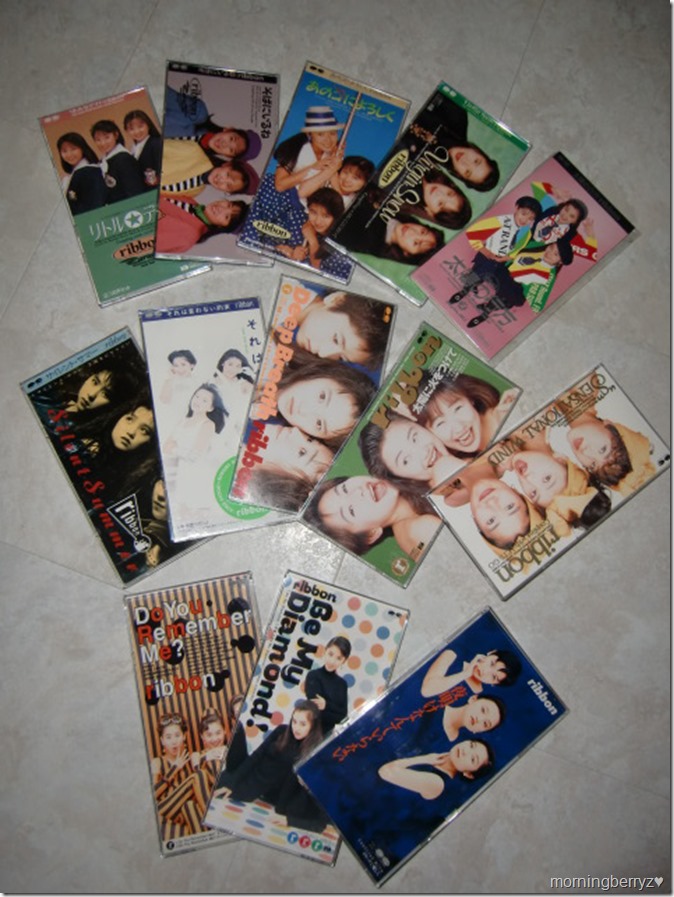 ..and my Ribbon album collection complete~.

If you’re interested in hearing and seeing more of Ribbon, I could expand upon this post to be much more inclusive of their discography in both videos and mp3’s, that though would be dependent on the response if any to this post ＾＾。

Lover and free spirit who's interests in Japanese culture and the like are insatiable. I am of pure Japanese/Okinawan descent, love my cats, sleep and am a bit naughty at times :).
View all posts by MorningBerryz →
This entry was posted in Idols♥ unzipped, Japanese idols, J~Pop and tagged be my diamond!, idols♥ unzipped, j-pop, japanese idols, matsuno arimi, nagasaku hiromi, ribbon, satoh aiko, sensational wind. Bookmark the permalink.