Posted on 2012年2月17日 by MorningBerryz

I’ve been meaning to post a few songs by Tanimura Yumi, the artist/writer that penned both the lyrics and music for Ayaya’s single release “Egao” and its coupling with track “Anata ni deaete.” Dating back to 1988, Tanimura Yumi has amassed quite a music collection over the years and even as far back as the early nineties she was already active in writing her own lyrics and music on select tracks. I was so happy to see Ayaya get a chance to showcase her vocals on a Tanimura Yumi composition…well not one but two!…and as I’ve already gushed over “Egao” and “Anata ni deaete” in that previous post linked above I’ll try to refrain from doing so again here. 😛 I wonder if Ayaya has any writing aspirations of her own and if perhaps she may tap into that in her post H!P career. Nothing’s for certain but I’m already assuming that she’ll no doubt continue on in music elsewhere in a new home or at least those are my upmost hopes!

This is such an awesome performance!!! “Umarekawaru kimochi” gets a new spin on it as this track was originally released way back in 1991 (on her album “Ai wa genki desu”) and here years later Tanimura Yumi does a great updated rendition solo on the piano!! Subarashii! The video and audio’s timing seem to be just a bit off though…but nonetheless an immaculate performance.

Tanimura Yumi’s writing skills even at an early age were quite remarkable and through the years she’s honed those skills creating a diverse tapestry of musical expression touching upon a well rounded scope of styles and genres. The track above “Semetemono I LOVE YOU” is a great example of her later development and it showcases a nice touch of a contemporary jazz element and by this point all of her songs were exclusively written by herself…lyrics and music. Just hearing this track may give you a strong connection to the two tracks that Ayaya was given to record as well as what her later style of writing entailed.

And here’s a wonderful live performance on solo piano of “Semetemono I LOVE YOU”…oddly the timing of the audio and video seem to be a tick off here as well…fushigi ne. While Tanimura Yumi’s earlier concerts were more like that of an idol, these later performances are amazing as the atmosphere is somewhat like a concert hall. No wotas jumping around out there! 😛

“Ai wa genki desu” was the very first song that I heard by Tanimura Yumi as it served as the title track of her album by the same name. Tanimura Yumi wrote the music and what’s immediately remarkable about this is that this release was not far from her debut as an artist as this track dates back to 1991. Really a cute and catchy song and note the very well composed song structure while considering how young she was back then! Plus listen for the toy drums which are cutely also credited in the liner notes! ^o^ Tanimura Yumi is so amazing live too and she projects her vocals so strongly and with such feeling that I’m always in awe whenever I hear her sing. 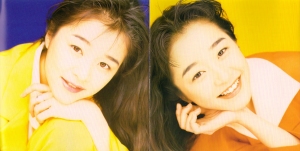 Here’s one more of her later compositions which she penned herself. “Koi ni ochita” is more on the dramatic side with a melody which showcases her vocal strength and range. Something to take notice of, as both “Egao” and “Anata ni deaete” really compliment Ayaya’s strong vocal range perfectly which UFA producers must’ve no doubt taken note of when they chose it for her to perform as they both share this gift of natural vocal strength. The degree of difficulty of a song like “Egao” really requires great range and vocal control…both of which Tanimura Yumi and Ayaya possess. Tanimura often performs live on the piano while singing and I’m always so impressed by anyone who’s able to project such feeling into their performance while accompanying themselves on an instrument.

In all I’ve collected 14 of her albums most of which were found at a local Book Off while the latter releases here were purchased through Japan’s Tower Export divison. ^-^ It’s amazing what gems you can find while browsing the shelves and to think that it all started with a chance purchase lead on by curiousity as I picked her “Ai wa genki desu” album release…..and what attracted me to it? I was amazed that it was a first press edition with special slipcase and booklet included…funny how I chose this but it truly led me to find some really exceptional J-Pop compositions. ^-^ Tanimura Yumi is one of Japan’s notable and exceptional talents.

“Can your idol do this?…♪♪”

Lover and free spirit who's interests in Japanese culture and the like are insatiable. I am of pure Japanese/Okinawan descent, love my cats, sleep and am a bit naughty at times :).
View all posts by MorningBerryz →
This entry was posted in Featured, Hello! Project, Japanese idols, J~Pop and tagged ai wa genki desu, anata ni deaete, egao, j-pop, koi ni ochita, matsuura aya, semetemono i love you, tanimura yumi, umarekawaru kimochi. Bookmark the permalink.