Posted on 2011年4月30日 by MorningBerryz 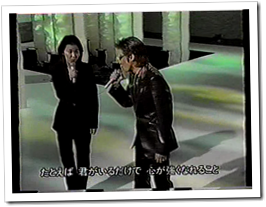 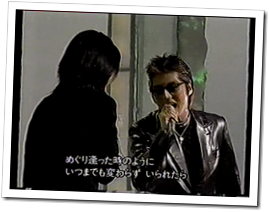 A magical marriage in music and stage presence took place on this night as legendary singer Ishii Tatsuya who’s best known for his larger than earth personality+ larger than (your group!) group Kome Kome Club + a larger than life voice to back all that up 200% and then some~!!!…took the stage accompanied by the most talented and beautiful Matsu Takako all on a most special engagement on Music Fair~.

Continuing with an evening of nostalgia from the previous SMAP♥ post these live clips too were transferred from (ugh! xD) VHS so please don’t attempt to adjust your computer’s screens settings as the grainy~ness is in a sense all part of the nostalgia~♥ in reliving these special moments =). I tried my best to preserve the video as best as I could by using a higher recording resolution and transfer to digital files but there’s still a tiny bit of audio distortion (only for a moment though in the first clip (*´∀｀)）and I’m hoping that truly these performances themselves will be much more poignant and memorable than the visual quality shown here due to also these being third generation copies of copies and now copied again to digital :P. 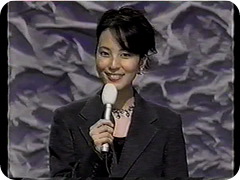 First though let’s pause for a moment~* to recognize one of t.v.’s most beautiful host personalities as Suzuki Anju (perhaps better known as a most prominent and accomplished actress in t.v. and movies) hosts Music Fair here…ever engaging~♥ and truly one of the classiest to grace television screens across Japan~.

And just how special~* was this musical engagement really? For more on both Ishii Tatsuya & Matsu Takako please visit the following gush~filled links ヽ(。´▽`。)ノ。。！！．．．

+ more can be found in further searches here =). 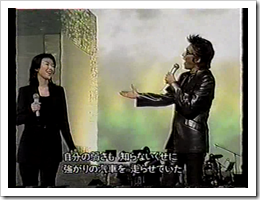 Wonderful performance of a Matsutoya Yumi song and if you watch the interview portion leading in from the earlier clip Matsu Takako is asked about this song’s significance for her and why she chose it.

~Matsu Takako “Stay with me” live on Music Fair~

And to end this night of nostalgia…Matsu Takako’s heartfelt performance of one of her earlier singles “Stay with me”……many many sweet nostalgic~dreams~*~~*♥!!!

Lover and free spirit who's interests in Japanese culture and the like are insatiable. I am of pure Japanese/Okinawan descent, love my cats, sleep and am a bit naughty at times :).
View all posts by MorningBerryz →
This entry was posted in Featured, J~Pop and tagged anniversary, ishii tatsuya, j-pop, kimi ga iru dake de, matsu takako, matsutoya yumi, music fair, sakura fuwari, stay with me, suzuki anju. Bookmark the permalink.