Posted on 2011年4月5日 by MorningBerryz

Shortly after the January 21st announcement during AKBb48’s “Request Hour Set List Best 100” the pre~orders went up for Akip’s latest unit interestingly named “Not yet” and such is the venue of favor these days for announcing graduations, debuts and other sometimes jaw~dropping bombshells upon unsuspecting fans’ heads~. Happily this time it’s the birth of a new foursome with the underlying theme of “mada” as in one’s striving for success through the trials and tribulations which come with growing oneself in order to perfect one’s craft for achievement.

Each version includes an exclusive song as well as complete karaoke tracks for the songs within and through Neowing you’ll also receive first press photos for each version you order although either I’m that unlucky or there really are only one photo version for each release they’re including photos with =/. But never look a gift horse in the mouth right….the photos have been most welcome =). In addition each release also includes an “extra content” picture card which allows access via scan code and as always you can expect worthwhile extras with each exclusively coupled DVD (note: Type C includes a 32 page photo booklet, no DVD included).

Just going by the title track “Shuumatsu Not yet” which is certainly cute in its own simple way, you soon realize that in that sense much more detail and creativity was invested into the aesthetics of the 3 jacket version’s cover~artwork which display striking fashions from 80’ pop to grungy rock to renaissance glamour~…..still that being said there’s certainly a somewhat strikingly icky fashion statement all its own happening in the pv 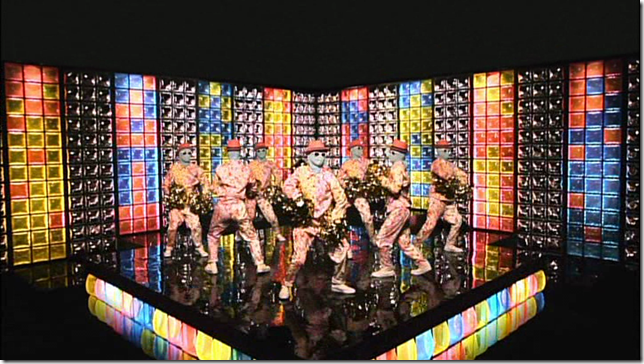 ….I’m not sure who’s vision or nightmare created such a bizarre idea to have faceless (already creepy!!) dudes decked out in Pez~inspired attire acting out like cheerleaders (・д・`*)！！I mean weren’t there any other AKB girls available or even Kenkyuusei available for the back~up dancer gig for this music video?(・_・)? ．．．？Certainly either would have suited the imagery here much much better ne~. Undeniable though are the girls’ alluring cuteness~♥ throughout although a lot of that may be my bias for especially Yuko, Sasshi and Kitarie and while Yuko certainly receives a lion’s attention always it’s nice to see both Sasshi who rarely has gotten a chance to break out in pv’s and Kitarie who’s visibility had gone down a bit until her recent resurgence get this opportunity to shine~*. This freeze~frame just below makes me excited* to watch her dance the hula~♥…but maybe without the tiny~hat although it’s most adorable here =)! And it must be stated that Yuko & Sasshi go together like cookies & cream…like salmon & capers…..like hugs & friendship o(*´∀｀)o゛♥。 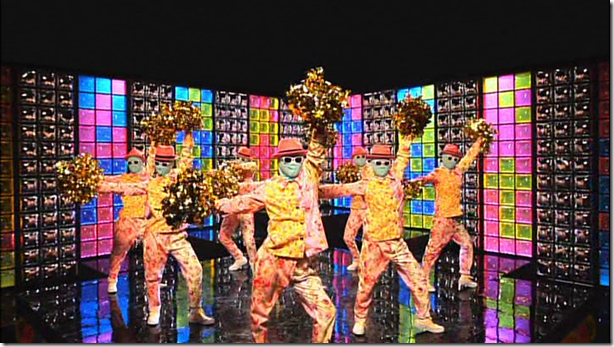 Still while the pretense of this single seemed to state much more for this song, for what it is…a cute~pop~song, it’s simple yet catchy in its own right although don’t be looking for anything groundbreaking musically here.

There’s an alternate pv♥ version too which can be found on the Type B single ＼(^o^)／☆！！！．．and not only is it completely void of those cheerleading Pez~Boyz but it’s so much the better of the two in yes~, every way imaginable! Hmm..all you need is a different director with a much different vision and for the aforementioned underlying theme of “Shuumatsu Not yet” this second pv♥ version focuses directly on just that as it highlights rehearsal footage which also shows off the hip~hop dance choreography in a much better light with the simplicity of a theater stage while also presenting a much more fun and energized outdoor set as the imagery flashes between the two and at times in their dance movements…seamlessly~. 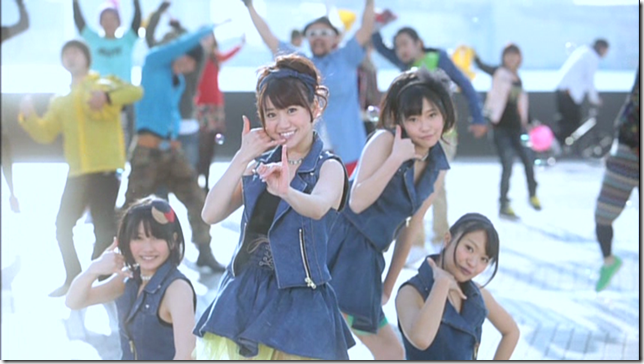 I’m finding the coupling with tracks a bit more enjoyable at the moment although I don’t want to overstate it as the title track’s got a bouncy cuteness to it too which is growing on me even as I type. Here you have an enchanting pop~folkyness in “Hirahira”, the lullaby ballad in “Sunao ni naritai”, a bittersweet melody in “Nakinagara hohoende” and the resonating electric~pop of “Warauga ii.”

Although Type C doesn’t include a DVD full of extras like its predecessors do it’s nonetheless a must have!!! And not only for its exclusive song but maybe even more so for the collectability stylishly shot 32 page booklet which extends upon each single version’s photo shoots! It does have a glued spine and not a stapled one so it was a bit of a challenge getting these images to scan okay as I wasn’t able to get each page to lay perfectly straight next to one another….. 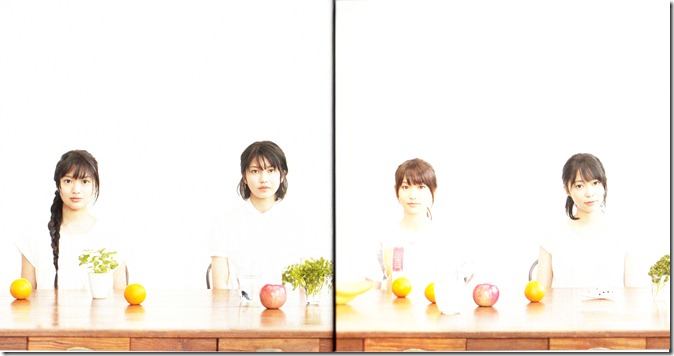 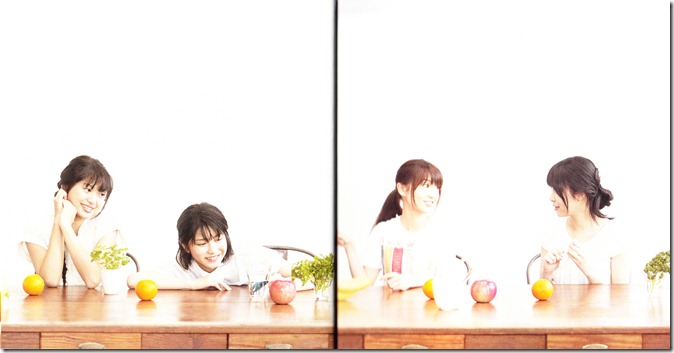 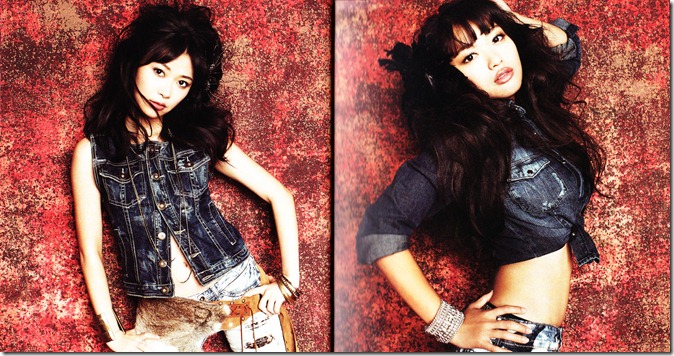 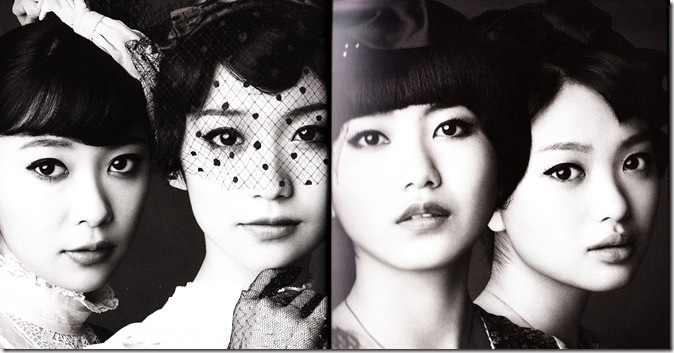 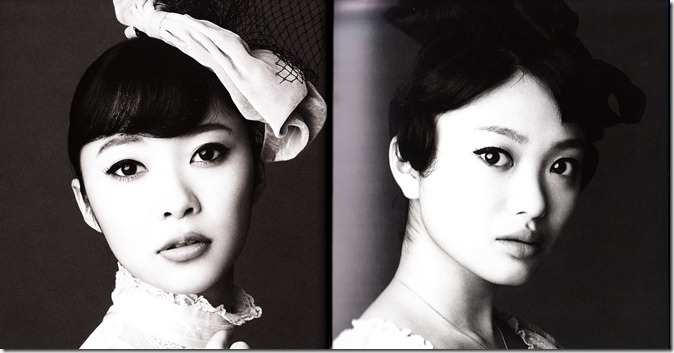 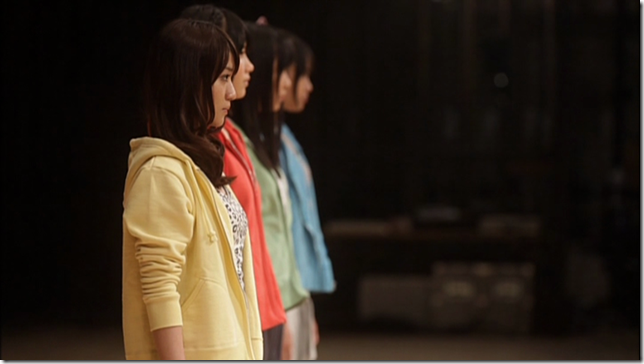 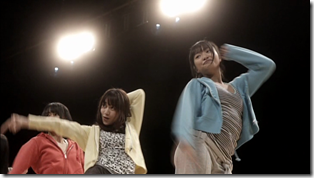 Type B’s short film extra furthers the “mada” theme and in just 18 minutes it manages to bring about an almost surreal world of characters into one rehearsal waiting room where our four girls face the reality of an unaccommodating atmosphere  with unfriendliness, a lack of space to rehearse and an unhelpful staff as the girls stand by for their opportunity. After some frustration between themselves and others a dance off ensues initiated by you~know~who♥!!!…all culminating into the girls’ entrance onto the big stage leading to “Not yet’s” audition chance~*. The short film is also accompanied by member interviews and a making of clip =). 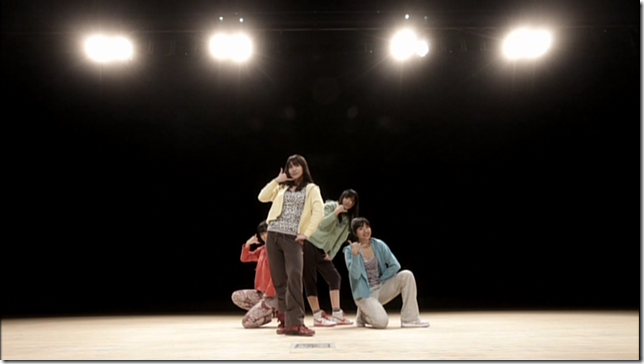 ..a bit of a closer look into the drama tapes revealed something a bit more.

Where things got a bit testy off set.

I must warn you though…if you’re a bit faint of heart or easily offended you may want to cover your ears eyes throughout this next segment…(^q^)! 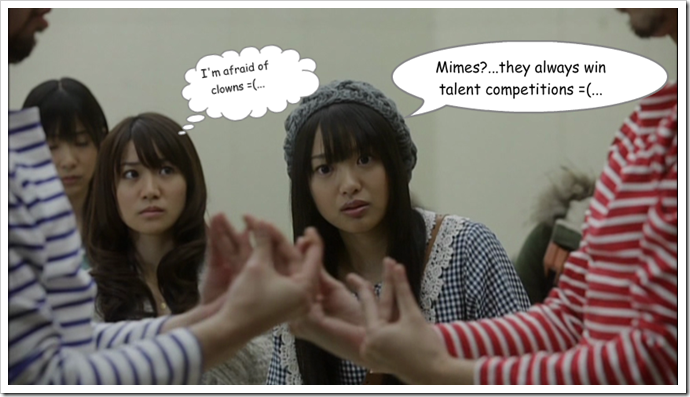 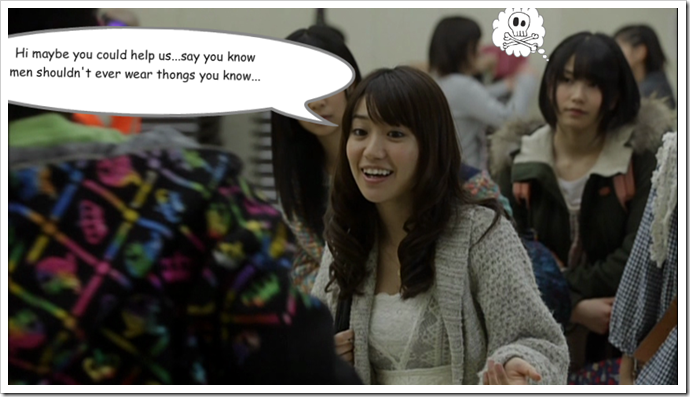 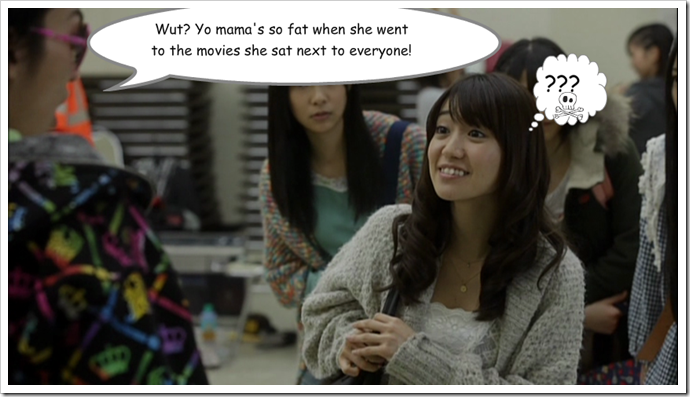 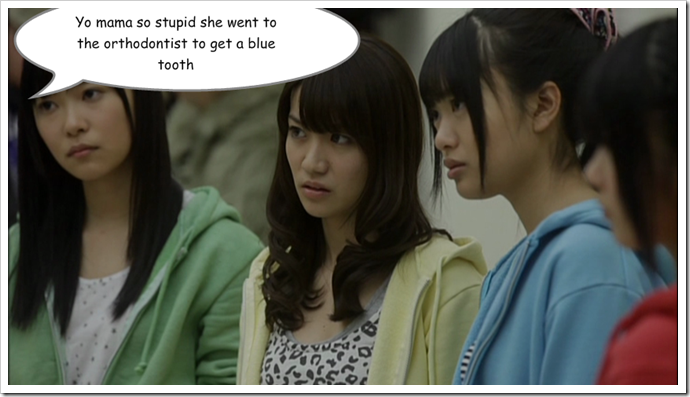 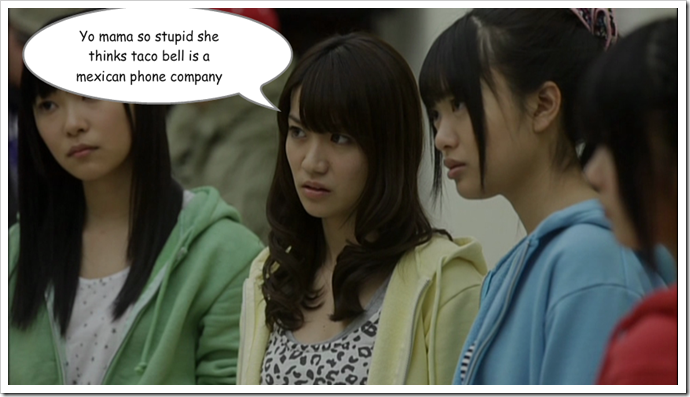 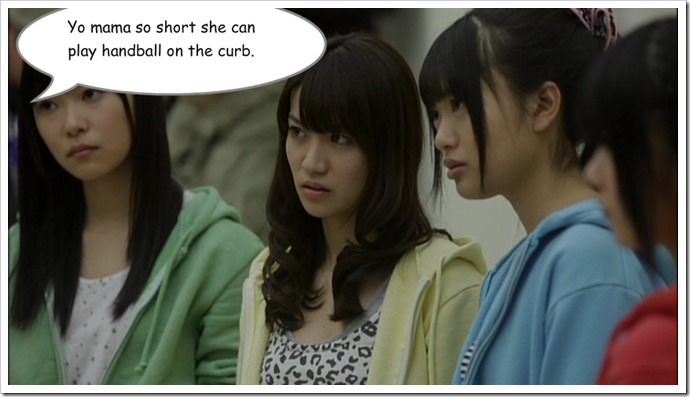 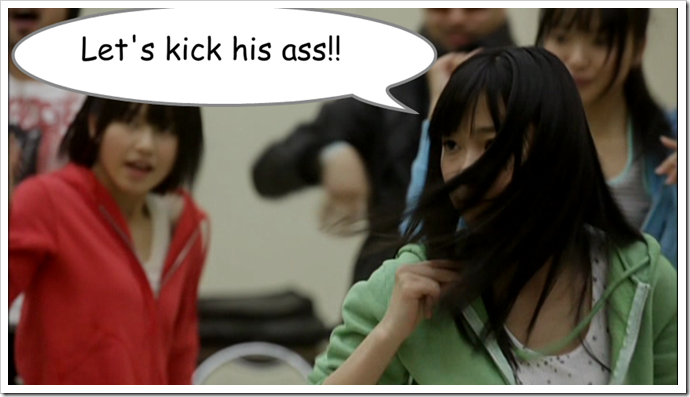 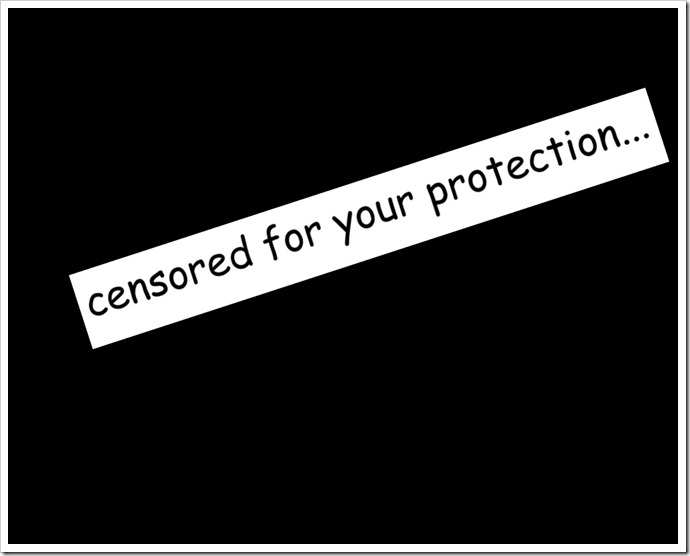 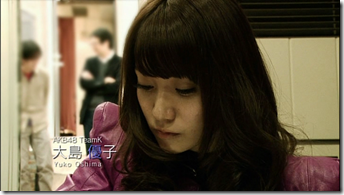 After watching each “Sore zore….” clip I think it would be soooo awesome if fans could get this type of intimate look back into each and every AKB girl’s time in the group!! Maybe not the Kenkyuusei just yet but surely everyone else…..and AKB never fails at including worthwhile extras with their single releases~*!! Here Yuko, Sasshi, Kitarie and Yokoyama Yui (by now you’re probably wondering why I’m yet to type her nick here

…but I usually don’t like to do that until I know at least a bit about her as nicks are much more familiar in address =) ) each have individual mini documentaries which have them currently commenting on their time in AKB from audition to first stage to present and each is wonderfully revealing and candid in nature…something best served with idols♥.

Yuko’s commentary and video takes you intimately through her audition, dance lessons, Team introduction, K~1 stage debut, her growth as an artist/ confidence to the moment of her being voted by fans to the #1 senbatsu girl♥ position. 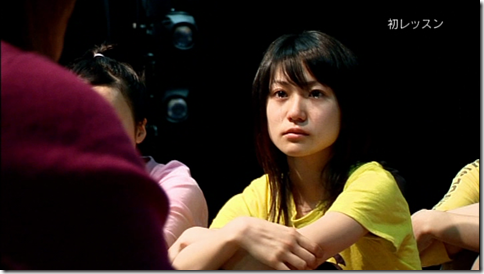 I adore how emotionally charged Sasshi is and through her commentary and visuals she speaks candidly covering her audition, working as a kenkyuusei, her contact with fans, facing a fear, her blog and how keeping a positive attitude and outlook through it all helped her to where she is now. She’s so much like the most endearing girl in AKB whenever you see her in just how openly she’s moved and how she expresses herself always without restraint….her honesty~. 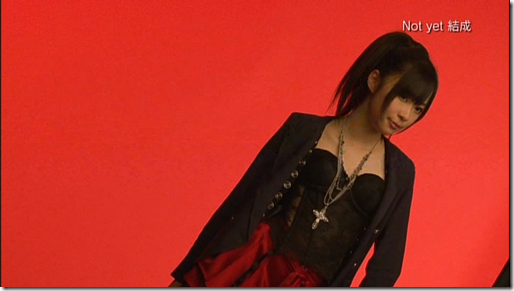 Lover and free spirit who's interests in Japanese culture and the like are insatiable. I am of pure Japanese/Okinawan descent, love my cats, sleep and am a bit naughty at times :).
View all posts by MorningBerryz →
This entry was posted in AKB48, Featured and tagged akb48, hirahira, nakinagara hohoende, not yet, shuumatsu not yet, sunao ni naritai, warauga ii. Bookmark the permalink.

12 Responses to 「Featured post」~AKB48 ‘s Not yet 「Shuumatsu Not yet」、features the creepy Pez~Boyz, insightful documentaries plus Yuko’s♥ lovely rage pt.2…