1. The ending theme song♥ is so perfect!!..and while it did change over time just seeing the closing credits roll along while Shinnosuke and Shiro dance awkwardly while mother and father….Misae and Hiroshi dream~walk through an array of floating foods, kitchenware and alcohol bottles and bars respectfully, and all to the song “Do~shite?” is animelody bliss! Just one of the best anime theme songs ever ＾ ＾♥

Looking at the photo you’d think that Shinnosuke is a perfectly normal and well behaved child and that couldn’t be further from the truth. And his voice is soooooo bizarre~awesome and like nothing I’ve ever heard before…..I think you’ll crack up to so much and there are a couple of little episodes at the end of this post =).

Only Shinnosuke would give said photo to a friend in means to cheer him up.

Just the thought of wanting to eat dog food thinking it’ll be most yummy and how that can be attributed to just how bad mom’s cooking is :O.

Watching Crayon Shinchan taught me what a bidet is for the very first time although you’re not seeing its proper use here xD. Hmm could be used for other things* too….tiny orgasm*? =P.

Never has language been mispronounced/misunderstood in so many colorful ways by a child.

Even though he sometimes means well, Shinnosuke always manages to get into trouble in some way, shape or fashion. 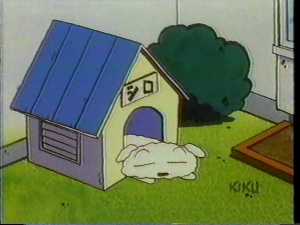 Shiro is one of the cutest pets ever! 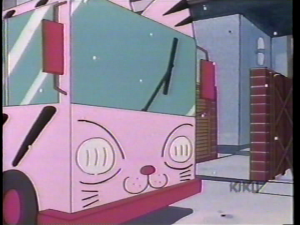 Even the bus which is supposed to take Shinnosuke to school is cute….now if only her were actually on it xD.

Who knew that answering the phone could be so amusing?

And that a mouth could be stretched this much after doing something really bad :O? 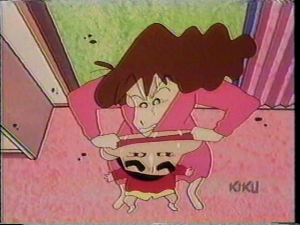 You can learn a lot about “parenting” too while watching, like how candies like Chocobee can get even the most unruly and lazy child to do “something.”

Although asking Shinnosuke to do some sort of house chore may result in….

..which will ultimately lead to this :O. 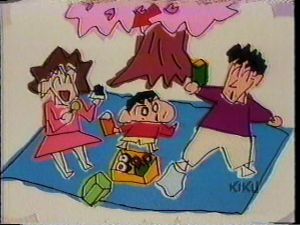 At the very beginning of each and every episode the Nohara’s look so peaceful with no worries =)…. 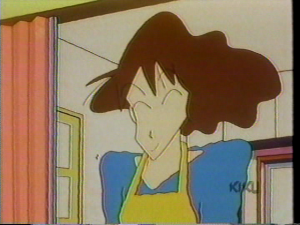 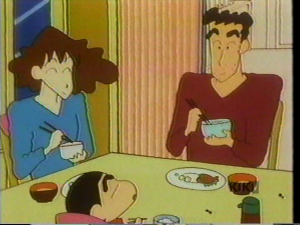 …and then Shinnosuke awakens.

Shinnosuke says the darnest of things….

…like when you’re at an all~you~can~eat dinner buffet :O

…or when he’s talking to complete strangers :O.

…or at home at the dining table while waiting for breakfast to be prepared by his mother :O

…and even while eating as a guest away from home :O.

And then there’s the calling of your mother by name and acting like dad which well can only lead to….

But he’s so adorable while asleep =). 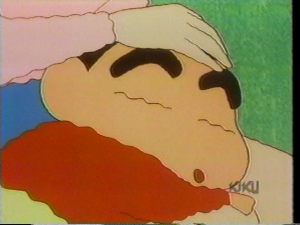 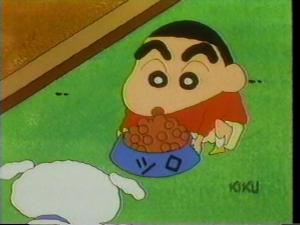 And Shinnosuke can be most loving♥.

Himawari is the cutest of names and she’s Shinnosuke’s one and only most adorable of little sisters =).

So if anything’s amiss in the house you surely know who did it.

Misae is even funnier after a few drinks but then she can sometimes turn into quite a lush xD.

Just seeing how children love to push buttons whether they be of a vending machine or yours :P…..here Shinnosuke chooses a cold beverage for his mom even though they’re stuck in a horrible snow blizzard outside with the very last of her change :O.

While below it’s just button~pushing urges that children often get xD. 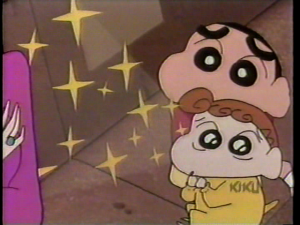 It’s those eyebrows of his….I mean they’re even way beyond Okinawan~exaggeration caricatures so awesome! 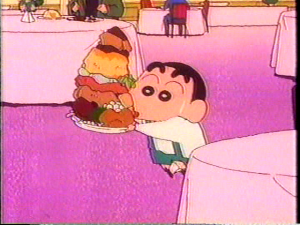 Because never has an appetite been so insatiable and just how does one so little consume so much?? :O

And you gotta love, wonder and worry about the family dynamics here as notice how Misae and Hiroshi’s expressions never change all the while going from saying Shinnosuke should deserve something special to not coming through with it :P. 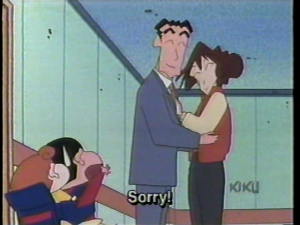 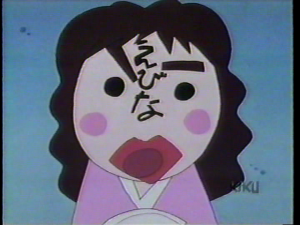 There are creepy dolls made by you~know~who….

..with more fights and apologies leaving one not knowing just what one should do. 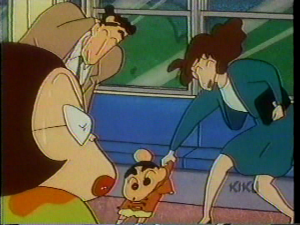 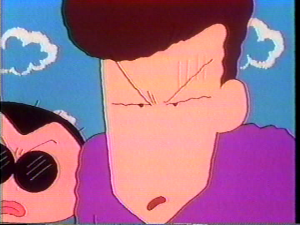 …and there are kindergarten hoodlums…. 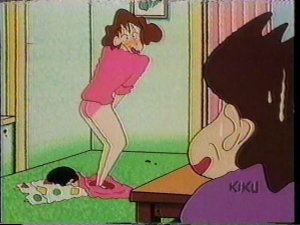 ..and those embarrassing moments* just when your neighbor suddenly walks by.

..but let’s not forget those tender moments of love…like when we creep mom and dad out by watching them kiss♥. 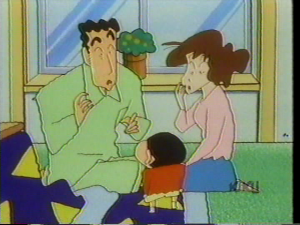 So while this post is winding down now there’s just a thing or more to say, like with all of this ear nibbling there’d be an animated Mike Tyson here too if only he had his way.

But despite all of the anger little Shinchan has caused, 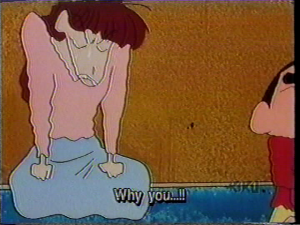 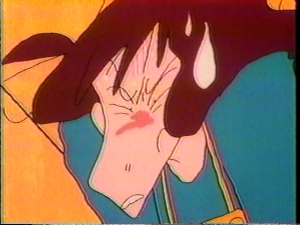 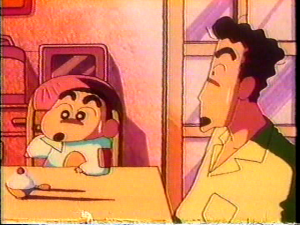 ….and embarrassment little Shinchan has caused over the years, 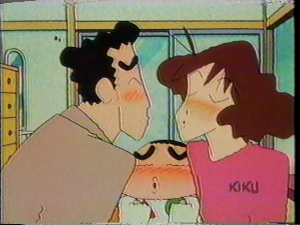 …and how he once stepped on dad’s man~zone bringing him to mimic karaoke while in tears. 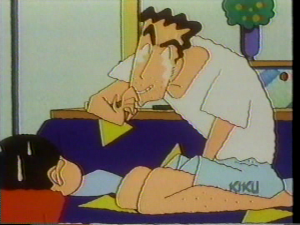 And while Misae may still dream~* sometimes of greener pastures too, 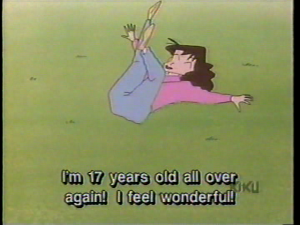 …..while Shinchan mispronounces and misconstrues.. 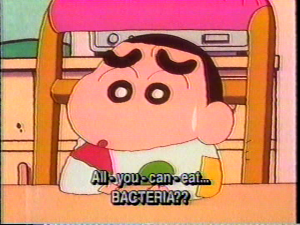 And lol I mean how many anime would show such a thing???…okay wait please do not answer that xD!

Though sometimes we may not see clearly eye~to~eye…. 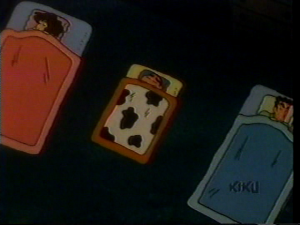 …you can count on those work mishaps….

..and that there’s a cute~magnet in each and every guy. 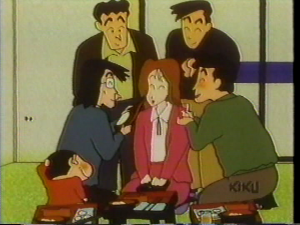 So now I must be going as I so need to pee and there’s just one last question, will that be one lump?….. 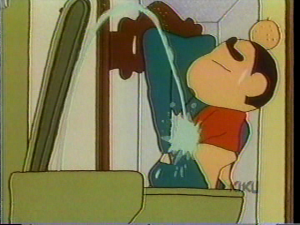 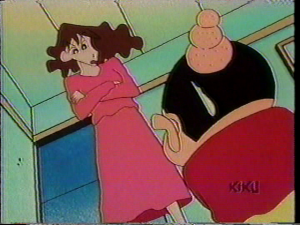 Below are a couple of Crayon Shinchan clips as this most amusing and wacky anime was once aired here on weekends quite a long time ago. They’re from the dreaded format of VHS (><); as there were no such things as DVRs or DVD recorders back then so please bear with the slight fuzz~ness but anyway I hope you laugh and enjoy them too…otherwise I’m sending Shinnosuke to live with you :P.

“Taking a bath by myself”

Lover and free spirit who's interests in Japanese culture and the like are insatiable. I am of pure Japanese/Okinawan descent, love my cats, sleep and am a bit naughty at times :).
View all posts by MorningBerryz →
This entry was posted in Anime, Featured and tagged anime, crayon shinchan. Bookmark the permalink.

10 Responses to 「Featured post」~48 reasons why I ♥ Crayon Shinchan