Posted on 2010年12月6日 by MorningBerryz

(edit: all audio which were lost during my move from Vox to WordPress have been re~uploaded to this post. If there are any other older posts dated before September 12th, 2010 (originally “Vox” posts) in which you’d like to hear or see the audio/video clips for please leave a request in the top page tab titled “Requests.”)

By 1997 Amuro Namie’s music career was reaching new peaks~* during her “can you celebrate?” period and while many perhaps dreamed to reach her level of talent and success, one aspiring artist sought and found true emulation in her style~ling.

Ishii Yuki debuted in July of ’97 with the group “LUV 2 SHY” as she appeared on one of the album’s stand~out tracks “Baby Cool!” and just two months later on September 3rd her official solo debut came with the release of her single “Neat Girl Age” both of which were on i NOKS Records, housed under J~Pop idol♥ record giant Pony Canyon. I so wish I could also share~* the music video and extras which include her visit to Central Park…an encounter with giant teddy bear plushies~♥!…Times Square and dance lessons in studio~ on her pv VHS release but macrovision keeps me from being able to (ノロ≦。)！

Producer Togashi Akio would begin Ishii Yuki’s career by penning the majority of her early releases~ in both lyrics & music♪ while also serving as arranger or co~arranger in every aspect giving her initial style a true~* J~Pop♥ sound all the while keeping it most original~. By the summer of ’98 major changes would be seen in Yukichan’s career as Takano Hiroshi would take over production duties beginning with the release of just her fourth single “Lavender Dream”…and thereafter an array of different arrangers would be at the helm of producer resulting in a most interesting, deeply varied and versatile change in the musical style of her releases…all in just a two year span~. From an idol♥ beginning to dance…r&b, culminating into a deeper genre of jazzy~* styled pop.To start it all…Ishii Yuki would appear on T.V Tokyo’s ASAYAN and through her audition~* she would then debut, and so I shall begin with her releases~*….. 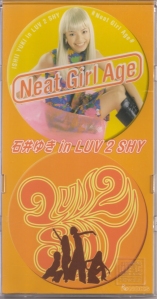 “uki uki baby” appears as the coupling track to “NEAT GIRL AGE” and while the title track went on to release its very own pv special VHS (30 minutes, pictured above in collection photo) I’ve always liked the coupling track a bit more and “uki uki baby” is full of *Motown~* love!!!! I mean with Motown~* hooks♥ galore!!!!….and here you’ll readily here Amurochan~like vocal phrasing…it’s unmistakable ＾ ＾！And Yukichan was so young when she recorded this making it even that much more impressive…think Michael Jackson in his early days with the Jackson 5~! Release date of single: September 3rd, 1997.

“Baby cool!” appears on both LUV 2 SHY’s debut album as well as Ishii Yuki’s album “Fantastic Voyage”….and I swear Togashi Akio must have been listening to Chaka Khan when he penned this one~* (￣▽￣)！！。。。and Yukichan performs a most rapid and *cute~* rap during the middle break ＾ ＾。A~h! this is so so Chaka Khan!!…(^q^)! Release date of album: March 4th, 1998.

Both tracks on Ishii Yuki’s second single release “Fantastic Voyage” are pure ~♥~ o(*´∀｀)o゛！with “Love under the moon” bringing a most sweet~* and light r&b/pop♥ sound and while Yukichan isn’t necessarily pushing her vocals here you can hear the finer subtle points~* in her voice in this style of composition♪. This is my most favorite♥ song of hers….um tied with “Denwa shite darling” (。ーωー。)。。。！ 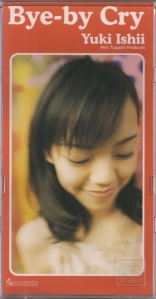 Now who hasn’t asked on many occasions for someone♥ most special to call? o(*´∀｀)o゛。。”Denwa shite darling” is such catchy~* J-Pop perfection♥♥♥ Love Love Love this song soooooo much ヽ(。´▽`。)ノ。。！！

The coupling with track “Natsu no mirai” is yet again heavily 70’s inspired and love~* love~♥ the horn arrangement and *fuzzy* instrumentation so much here (*´∀｀*) ♪♪～！Single released on: June 3rd, 1998.

After a 6 month break Yukichan would return with what would be her release closest resembling Amuro Namie’s early high energy techno styled pop~* which helped kick off her career in a most meteoric rise~ back in the earlier 90’s. Here Yukichan can be heard leaving behind her previous J~Pop♥ sound and it’s also the point of the most major change in her appearance and personal styling as well as heavily evidenced by this single’s most *striking~* cover♥!!

Ishii Yuki “GET SOMEBODY” mp3

Ishii Yuki’s 7th single “complex” continues to stay with a much edgier dance style…this time though the title track is infused with a rock driven sound as well~. Single release date: June 17th, 1999. 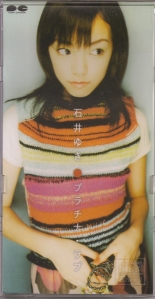 In what I believe to be Ishii Yuki’s final single release…”Purachina Rabu” (“Platinum Love”) revisits~* much of the funky/groovy♥ 70’s feel~* which was heard on her early releases and here you can really bear witness to how much her vocals had grown in just a two year period…..she sounds so *amazing~* on this single and with the coupling track (below) “be with you” the maturity in her vocals shine~* so so much also just as you’d imagine from an artist much more seasoned and how they would perform at a later period in their career~.

Ishii Yuki “be with you” mp3

Lover and free spirit who's interests in Japanese culture and the like are insatiable. I am of pure Japanese/Okinawan descent, love my cats, sleep and am a bit naughty at times :).
View all posts by MorningBerryz →
This entry was posted in Featured, Japanese idols, J~Pop and tagged ishii yuki, j-pop. Bookmark the permalink.