Posted on 2010年7月21日 by MorningBerryz 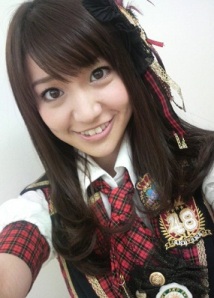 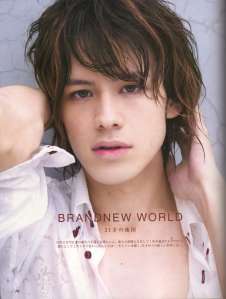 Hmm…just how smart is Yuko?..well she said and proved a lot by counter~blogging an article put up by Sports Hochi which is a daily sports newspaper just today~. Thank you~* HarimaKenji for linking me (*´∀｀)！

First of all the article is claiming that there are romantic dating ties between Yukorin and WaT's Eiji Wentz and who could blame her I mean he is a hot handsome hapa guy (makes him an "HHH" XD!) Sometimes girls have to attend HHH meetings by order of a court but that's another story :P! Anyway the article goes on to mention details of their "romance" having been going on for a few months (can an idol nowdays really hide for that long without being seen?!!!) ever since the two acted together in the drama "Angel Bank ~ Tenshoku Dairinin" (haven't seen it, now want to see it!) and also mentions Eiji visiting Akihabara Theater and even a concert earlier this month @ Yoyogi National Gymnasium.

Now we all know the consequences of dating while being an idol you see it's similar to a pro star quarterback not being allowed to ride a motorcycle :P! As it's in his contract! Hm, but does an idol have such a contract in which they signed when first joining on I wonder (・c_・;)？Maybe the first meeting could go like this…..

Yukorin: I must think of a simpler way of signing my name….I've gone through so many sharpies already.

Agent Kinyoku: Just be sure to read the very fine print, here use my magnifying glass I always carry one with me for these special occasions.

Yukorin: So you're saying I won't be allowed to…snow board, parachute out of a plane/jet anything that flies, go surfing unless it's near to the shore, attempt to fly, drink milk unless it's lactose free, eat fugu, play flag football a the beach, prepare fugu, become pregnant, ride a motorcycle, hang out with Carrot Top, talk to Mel Gibson, dress like Lady Gaga, join the X~Games (unless you're only interviewing the athletes), climb Mt Everest, and no stalking Tackey or Tsubasa?

Agent Kinyoku: No not that section it doesn't apply to you that's just for the male athletes I sign. You just can't date anyone ever.

Agent Kinyoku: After you've been in the business for this long and you've seen everything you gotta cover all bases just to be safe.

Yukorin's blog entry to address the report by Sports Hochi can be read here~*. You have to love the poise and wit she employs to deal with this hopefully non situation "situation" as Yukorin first states that she's been written about for her very first dating scoop. She goes on to say that Wentz is much like an older brother to her giving her advice at times and that specifically the meeting at Yoyogi earlier this month during her concert was actually attended by the cast of drama and not just Wentz. There's a funny moment when she says that Wentz "doesn't see her as a female" and she also apologizes to fans and her fellow AKB members for causing so much worry. There's a very sincere tone to everything she writes and you have to really appreciate her candidness in light of such a alarming situation..hopefully non situation "situation." Towards the end of her post Yukorin states clearly that she has no time for love in her life right now with work being her priority above all (the no love part is sort of sad but we all know what Agent Kinyoku would say! (>_<)’！）. But the most funny part of Yukorin's wit comes right at the end where she addresses that the article made her realize she's a celebrity!…and she addresses "Kayochan" (not sure who that is

and she notes that AKB members have sent her lots of e~mails too regarding this news) directly asking her to stop sending her e~mails saying she's been "dismissed!" =(..and to instead start her own scandal…..lol to take the heat off of Yukorin I'm guessing :P! Yukorin's so funny (。ーωー。)笑！

I've been trying my best to concentrate today and be productive but I keep seeing this…..

Lover and free spirit who's interests in Japanese culture and the like are insatiable. I am of pure Japanese/Okinawan descent, love my cats, sleep and am a bit naughty at times :).
View all posts by MorningBerryz →
This entry was posted in AKB48 and tagged akb48, eiji wentz, oshima yuko. Bookmark the permalink.