Posted on 2010年3月13日 by MorningBerryz

After writing the post just below this one I'm realizing that perhaps it may have been taken a bit out of context~, "Otakebi Boy Wao!" is actually the very first BK song that I've just not been able to embrace (._.;). But my fandom~♥ for BK remains very much the same as it's always been as I've loved and supported them ever since the release of their third single "Piririto yukou!" which originally began my fandom~♥ back when first seeing this pv♥ in the Summer of 2004~ and ultimately led to the naming of this blog o(*´∀｀)o゛。

Since that day, I've accumulated quite a bit of post on Berryz Koubou including my thoughts~♥ on the members, their personalities, various releases including many of their singles, pvs, event pvs, photo books, calendars, albums, concert T~shirts, photo sets, appearances in magazines, special release merchandise, etc… =).

I've also been an avid (*´∀｀*)。。supporter of BK~♥ since mid 2004 and while these photos just touch upon mainly their music releases~* as I've also purchased numerous T~shirt sets, concert photo books, photo sets including their complete Hawaii♥ sets which were sold here when we were lucky~* to have our very own official Hello!Project Store location in Waikiki, Rakuten Eagles collaboration baseballs, complete group member autographs (including Maihachan's~♥) as well as a few perhaps odd collectibles along the way….so I'm hoping that the previous post doesn't give an impression of any diminishing of my BK fandom as it was rather like an attempt to have a bit of fun and humor with the whole thing＾ ＾♥。I do have a sort of strange sense of humor though…(^q^)!

Below are my complete singles (most including all LE & RE versions), complete albums, event DVDs, complete pv DVD singles (just waiting on their pv DVD single of "Otakebi Boy Wao!" to arrive) along with concert & play DVDs~ o(*´∀｀)o゛♥。 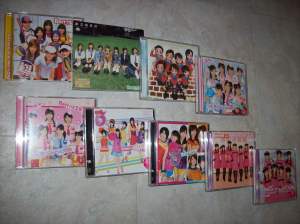 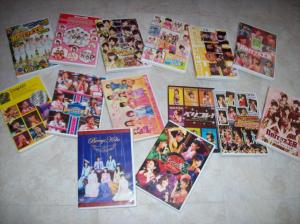 Lover and free spirit who's interests in Japanese culture and the like are insatiable. I am of pure Japanese/Okinawan descent, love my cats, sleep and am a bit naughty at times :).
View all posts by MorningBerryz →
This entry was posted in Hello! Project and tagged berryz koubou, h!p, hello!project, otakebi boy wao!. Bookmark the permalink.