Posted on 2009年7月23日 by MorningBerryz 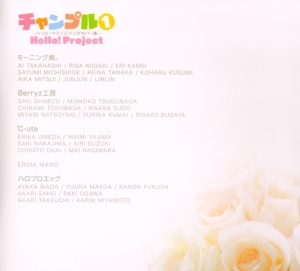 Hello! Project's latest all cover song~ release puts a modern spin on some very notable songs from Japan's yesteryear~….and just about everyone's invited for this one as all of Morning Musume, Berryz Koubou, C-ute, soloist Manoeri & 7 Eggs make the musical♪♪ journey in songs ranging from folk to rock to enka. The theme of marriage is abound in all tracks with some more directly than others all the while keeping to the emotions of ♥.

First press editions include a randomly inserted photo card out of a variety of 5 and while the CD I received has Momusu's card I do imagine that the other four would be groupings of members as introduced in the booklet…Berryz Koubou..C-ute..Manoeri..and H!P Eggs~.

The very first song that caught my undivided attention when the album arrives was the very first track!! E~h!!!! "DIAMONDS?"!!!! Could it be that H!P has finally aspired to put their own touches upon one of the most beloved J-Pop songs of all time by the most prominent all female band of all time that Japan has produced?!!! I quickly checked the liner notes to see whom the songwriters were and there it was…..lyrics by Nakayama Kanako and music by Okui Kaori!" So it was Princess Princess that H!P was now doing a cover song by and without another moment to pass I had the CD playing………….of course with such a beloved composition also comes the inevitable moment of over scrutiny….me being most guilty whenever hearing a cover song of anything *precious*. (・д・`*) But quickly jumping back to calm contemplation I must remember that cover songs are a way of other artists interpreting them, often adding or changing their form artistically…..thus, I really shouldn't be comparing the original to the cover too critically although sometimes I wish they would sound much more similar!….a most silly notion I know..(._.;)!

With that being said……XD….HIGH KING's version is a bit too electronic and I miss the sound of Kanako's rockin' guitar riffs so much! (。ーωー。)

And the sudden appearance of this most loved song would explain why I finally jumped at the chance to write a Princess Princess post as there is such a linking here to speak of. That post is just a couple down from here but here's a link to get you there quicker so that you can experience the awesomeness that is Puri Puri~. =)

And for comparison here's the original and undisputed most awesome version: 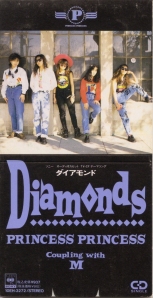 Easily one of the *cutest* tracks on the album performed by C-ute & Manoeri!! And while I'm not familiar with the original I do sooooo adore idol Ichikawa Yui's version as well!!!! More Ichikawa Yui *cuteness* with some really catchy J-Pop songs can be found in this post from awhile back and here I'll add her most wonderful version of "Ai wa katsu" in the form of her music video….her vocals are so ………(゜∀゜)………。!!!

Her video has a home movie look to it but it's not actually an old clip as it wasn't released too long ago….I think they did had to add a *warm* feeling to the song~. =)

The all new Minimoni unit with members Linlin, Miyamoto Karin, Takeuchi Akari & Fukuda Kanon performs "Tentou chuu no samba." I'm wondering if these units are back just for this special cover album or will we see them more in the future with further releases in solo efforts~.

The all new PucchimoniV with members Mano Erina, Hagiwara Mai & Nakajima Saki tackle a composition by one of J-Pop's greatest singers/composers…..that being the incomparable Ishii Tatsuya of Kome Kome Club!!! This vocal lineup does quite impressively especially when considering the amazing man behind the original vocals…..and I especially find little Maimai leading the vocal charge here as she's really singing strongly as this song so demands! Nakki sounds powerful here too and Manoeri matches perfectly in this trio~.

But to truly appreciate this anthem that is still one of them best selling songs in Japan's musical history one must also hear the original I think…in all its *glory*! Also more on Kome Kome club can be found here in this post from a short while back plus many more great songs to listen to~. ＾ ＾ 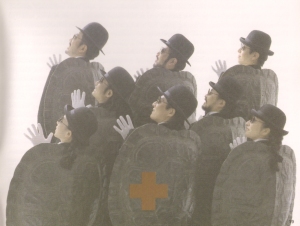 The first solo effort comes with Tanaka Reina's rendition of "Heya to Y Shatsu to watashi." And just as Reinachan *shined* so much with "Kira kira fuyu no shiny G", she gives such a great vocal effort here too in this lullaby of a composition~.

And really what would a H!P album at this stage be without the inclusion of their beloved duo GAKIKAME?! J-Pop legend Matsutoya Yumi provides the composition here with "Mamotte agetai" ("I will protect you") Sweet mid tempo melodies abound and although Gakisan's the stronger vocalist between the pair you really don't get that impression here as kamei really holds her own beautifully and with such strength~.

Veteran writer/performer Sada Masashi lends an enka flavored composition in "Kosumosu" for Aichan to tackle and she does so with amazing vocal control where she moves between vulnerable to powerful with emotional nuances in her vocal tones~. This you'd really expect from Aichan who has proved time and time again of the depth and strenght in her vocal ability which has also proven to translate well to stage and perhaps to a solo career. Makes me want to listen to "Yume kara samete"………….

It's quite a spin and change from the original ZYX but nonetheless a most adorable new unit! =)

Biyuuden gets a "sequel" title with Zoku Biyuuden added and the newly formed unit now consists of Michishige Sayumi, Sugaya Risako & Junjun~. Sayu is the perfect member to take on the role left vacant by the most *adorable* Rikachan and this is really one of the most interesting choices put forth by Tsunku on this album of recreations and reuniions~. "ONLY YOU" provides a most fun and upbeat melody which really suits the personality of members' so perfectly here and vocal wise it's pure fun intensity to be heard~! =)

Akai Sweet Pea/ for you…

Now this is a very very well know classic in Matsuda Seiko's "Akai Sweet Pea" and in trying to recreate one of your very best of units ever….Tsunku, please choose wisely! Matsuda Seiko was truly one of Japan's first breakthrough female vocalists in a solo career….by her peers and artists that have come afterward so much inspiration can be seen/heard stemming from one of the longest and most successful careers in J-Pop~. While the two previous incarnations of Tanpopo without question produced some of Tsunku's most diverse works over the years this newly chosen lineup of Okai Chisato, Kumai Yurina, Mitsui Aika & Kamei Eri is well fit to handle more of Tsunku's most creative and inspired compositions if he so chooses to further their existence beyond this album~. I love how Tsunku added the "#" symbol~!…..it make me smile (￣▽￣) Furthermore this new unit has some of the most distinctly different sounding vocals and on paper I just wouldn't be able to imagine how they would work together but they do so perfectly~! XD

The album's third and final solo comes courtesy of the most talented Linlin!! "for you…" provides a wonderful vehicle and palate for any artist I think and Linlin makes the most of the vocal arrangement~. Compared to some of the other tracks here Linlin, given a much more vocally textured song filled with moving emotions delivers arguably the best overall vocal performance on the album. Her vocals hold so much emotions with the level of vibrato and control you'd expect from perhaps artists like Ayaya…Mikitty…..& Gocchin~. This track is pure ~♥~.

Manoeri in addition to C-ute is also matched up with Berryz Koubou for the album's 13th track. Sada Masashi's 2nd composition chosen for this album and with "Kanpaku sengen" this song is much more in the vein of an American styled folk song verses the Japanese folk style of his previously chosen track "Kosumosu." A wonderfully distinctly different approach to "folk" music can thus be heard when listening to these two tracks back to back~. The vocals here are a bit amusing during the verses with that jerky sort of abrupt phrasing while the chorus portions flow like cool whip on Jell-o~ (￣▽￣)♥ in an ensemble arrangement. Overall more oa an unusual song for me personally but I do love it so!! =) 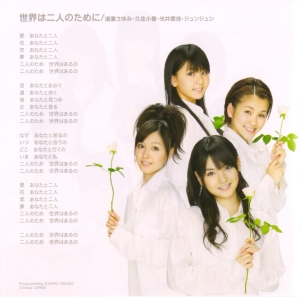 H!P's marriage themed album ends with a slice of Momusu in its final track and "Sekai wa futari no tame ni" glistens like a light hearted R&B seranade~. o(*´∀｀)o゛♥ And just an inckling but something tells me that Mittsi and Junjun raided Kohachan's mini refrigerator just prior to recording as Kohachan's vocals are so so tame here….but really she is very capable♥ ne~….think "Koi Hanabi." ＾ ＾

Lover and free spirit who's interests in Japanese culture and the like are insatiable. I am of pure Japanese/Okinawan descent, love my cats, sleep and am a bit naughty at times :).
View all posts by MorningBerryz →
This entry was posted in Hello! Project, J~Pop and tagged chample 1~happy marriage song cover shu~, diamonds, h!p, hello! project, kimi ga iru dake de. Bookmark the permalink.