Posted on 2009年3月12日 by MorningBerryz 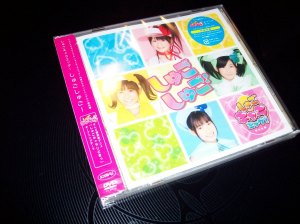 The last time I truly had an Egg! induced dream was when Conan O'Brien paid my pc a visit via flashlight, operatic music, the dark & a vivid albeit very odd look into the "future." (._.;) Given that 2011..2012 are still quite far away it does however look that at least Maeda Yuuka, Wada Ayaka, Saho Akari and Fukuda Kanon are totally safe from "Conan's" outrageous visions which were revealed to me in my um….."Egg! induced dream." XD

I'm actually watching Shugo Chara's second pv DVD single before ever having watched their debut……and I'm now really regretting having not purchasing their debut like I really should have! (>_<); (heads to Cdjapan to remedy the situation!) 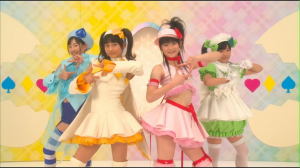 Looking back at my first UFA official Egg! photo set it's just so amazing how much each member has grown since! It's almost as if the Fukuda Kanon pictured in my set was just a yolk back then~! XD The chemistry between these four chosen members is so natural and although this is just their second musical venture together the scenes from the making of clips really display a sweet bond between them…… 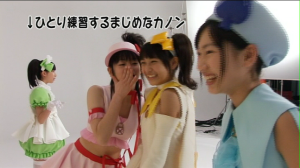 …and it seems that Yuukarin and Akarichan are already making fun of each other's tendencies~! ^ ^ 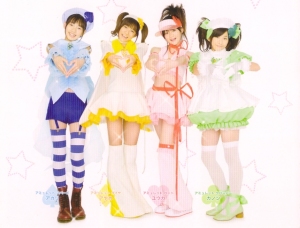 Each member in accordance with the anime series "Shugo Chara!" is matched with one of the four suits in "trumps" with…..

…Maeda Yuukachan as the "Heart." Albeit that I've only watched this one pv so far it's definitely Yuukarin as my early favorite Shugo Chara Egg! member! There's something very "Momo-esque" about her~! She's like Tsugunaga Momoko's little sister…..although I do wonder who's actually taller right now~! XD Yes there's much less helium to speak of but it has more to do with her overall demeanor which reminds me so much of Momo. The "Peachy" one has a bit of company now! (*´∀｀*)♪♪ And wouldn't a special edition "Shugo Chara Egg!" playing card set be so perfect as perhaps FC merchandise?!

Fukuda Kanon represents the Clover and her personality which comes off as much more mature than her years strikes me as very Maimai like and not only in her maturity which is really evident when you hear her speak on the DVD next to her fellow three members, but also in a sense her vocals have a special uniqueness to them which really stands out just as Maimai's vocals do~.

Saho Akarichan represents the Spade and she looks so different from the UFA photo that I received awhile ago~! Kawaii deshou~! ^ ^ 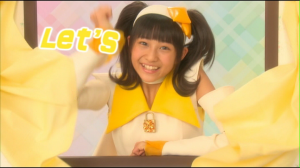 And completing our suits of trumps is Wada Ayaka representing Diamonds~! It never ceases to amaze me how UFA scouts never fail at finding future talent and whether it be by means of auditions or……..hmmm how do they go about finding the others I wonder…….(imagines Johnny in a pararell universe going door to door in Japan asking to see what everyone's children look like as well as noting their parent's genes…………….:o …) that is quite creepy though! XD

Above is the original version of the "Shugo Shugo!" pv and it's really the perfect blend of anime effects and simple backdrops coming together to bring the anime characters to life so to speak~. The after production animations and glittery effects really add a sweet visual touch throughout the pv and has a four unit youth idol group ever been this cute before?!! They all tickle me giddy~~(*´∀｀*)♪♪

Above is the Close up version…..

…and thank you~ for the inclusion of a Dance shot version!

The dance choreography becomes very very cutely mesmerizing after just one play and it's repetitive nature all the while simple (I use the term "simple" very loosely here though as I for one would take forever and a day to learn this dance I'm afraid and my bad coordination would come to light in no time! 😛 ) suits just everything about the song's arrangement so well…..just don't mention the word "simple" to the adorable Yuukarin~! XD………….

…who encountered a bit of a dance rehearsal mishap…….awwww so adorable! XD

The song's simplicity and while childlike in many ways is so infectious…..add in the most adorable outfits, very effective dance choreography which really impresses! and really the most engaging ingredient, that being the solid vocal abilities of all four members. I won't hold back here and say that in some ways these Eggs vocalize better than some of their much older fellow H!P members and just imagine that their voices haven't even matured fully yet so that's really inspirational when envisioning just how far their potential can progress even further in the years to come I imagine. ^ ^ 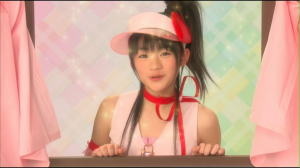 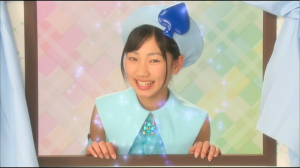 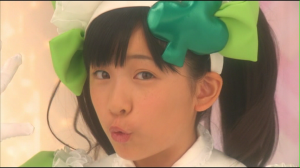 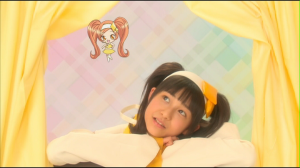 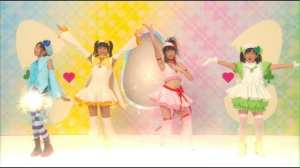 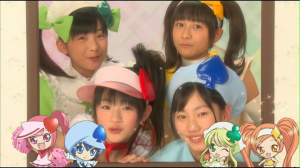 I'm so sorry..I couldn't control myself when taking screencaps!! XD 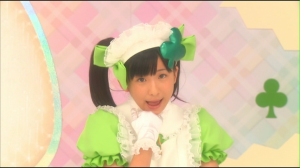 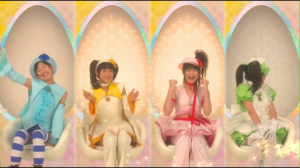 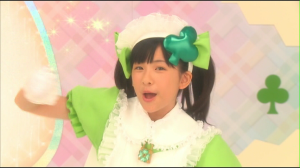 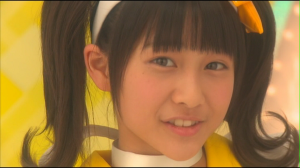 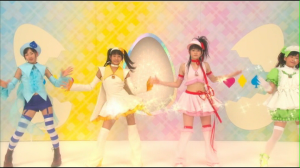 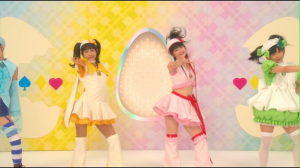 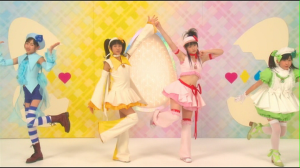 Shugo Chara Egg!'s pv DVD single has an approximate running time of 22 minutes and in addition to the three versions of their "Shugo Shugo!" pv there's also the ever present making of feature which H!P and UFA brought to prominence many years ago…arigatou ne~! Just a few captures from the making of follow…..

…but as I can't help myself at the moment I'll include some ♥~Yuukarin~♥ first! ^o^ 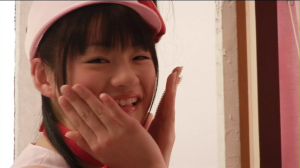 And now we return to our regularly scheduled screencaps…..(._.;) 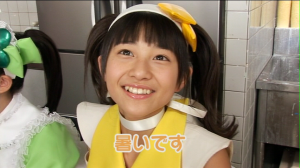 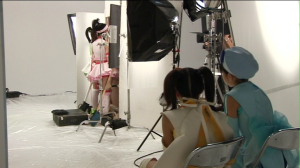 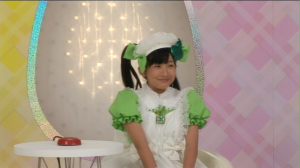 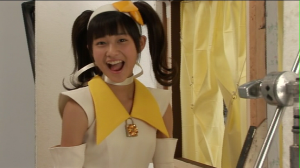 Lover and free spirit who's interests in Japanese culture and the like are insatiable. I am of pure Japanese/Okinawan descent, love my cats, sleep and am a bit naughty at times :).
View all posts by MorningBerryz →
This entry was posted in Hello! Project and tagged fukuda kanon, hello! project, hello! project eggs, maeda yuuka, saho akari, shugo chara egg!, shugo shugo!, wada ayaka. Bookmark the permalink.