Posted on 2009年2月17日 by MorningBerryz

Congratulations to Matt Kenseth on his Daytona 500 victory!!!
Really so many mixed feelings about this year's Sprint Cup opener……….just happy and excited to see the new season get kicked off in grand fashion while at the same some not so good developments occurred during the 51st running of what should be "the great American race" each year. But before anything…I'd like to congratulate Matt Kenseth and Jack Rouch on their first Daytona 500 win!!! Matt is so deserving…..he's always been one of the most respected and classiest of Cup drivers on the circuit through the years…congratulations Matt! ＼(^o^)／☆

While this is indeed just race one of a thirty six race long season it was heartwrenching to see all three of my favorite drivers finish in not so great positions with Jeff Gordon finishing in a disappointing 13th along with teammates Dale Jr. in 27th and Jimmie Johnson in 31st  (´⌒｀。).

Restrictor plate racing in general has always been a wildcard on the schedule each year and none more than the season opening event where the leveled horsepower amongst cars along with Daytona's slick and often bottling track configuration often causes the feared "big one" which seems to inevitably change the very face and landscape of its competitors at any given inopportune moment. The "best" handling cars seemingly almost rarely win the event these days as often more than not they fall victim to circumstances out of their control including but not confined to untimely tire failure, other driver's errors, or dare I now say…..mother nature herself? Really one can conclude that each and every driver and team in the field is equally faced with such misfortune on any given lap and while that is true…somehow through recent years that just hasn't been the case in the midst of twists and turns which this event inevitably seems to throw at its most prestigious and well equipped competitors. Being at "the wrong place at the wrong time" is most popular….a direct result of restrictor plate racing and while this brand of racing is mesmerizing for fans to witness, just how gut wrenching it must be for the 43 drivers in the field for each event, something most of us will never truly know.

The skies opened up at Daytona International Speedway just about three quarters through yesterday's event pushing NASCAR's hand to call the race prematurely and while the post race fallout has been notably sour amongst writers and fans alike to a great extent, I do find NASCAR's reasoning to be well thought out and despite my own personal desire to also witness the final quarter of the race possibly held today giving the full advertised 500 miles its due I do understand their reasoning. A carried over finale held on Monday would give race teams a much shorter time which is needed to travel back to NC (the sight of most Cup team's headquarters) to load new cars & equipment before heading cross country all the way to California for the season's 2nd event. Furthermore with the current economy in it's bad state the cost to teams to stay an extra day at Daytona would further push teams into dismal financial situations which they are already facing head on full force. From a fan's standpoint I do see the need for NASCAR's biggest event to run in its entirety but when I take a step back and consider these circumstances…..much of them due to the big three American auto industries' struggles in these times I can see why NASCAR called the race last evening. Surely I was most disappointed along with every other fan but in this new gloomy economic landscape however, even fans I think should be most forgiving and understanding in these dark circumstances where race teams are merging and dismantling much of their resources just to survive. 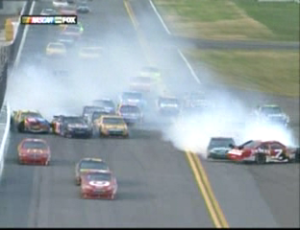 The wreck ensuing due to Dale Jr. and Brian Vickers' getting together on the backstretch just added to the already gloomy forcast of weather on the way and in this one instant, truly changed the outcome of the race with many of the race contenders and best cars leaving the track in utter wrecked fashion. There's always three sides to the story when a wreck like this occurs and I'll refrain from going into it any further right now as many of these wounds are still weighing greatly on everyone's minds….mine included of course. 😦 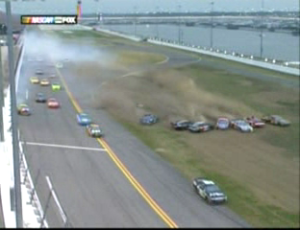 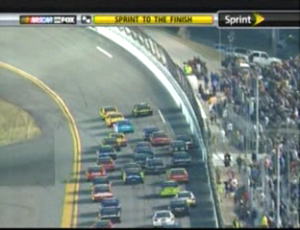 (Results were determined by an average combined finish of the two drivers chosen by each entry)
I felt this was a really fair way to give away the single as every entry had an equal chance as they were able to choose their own two drivers for the race before qualifying began for the Daytona 500. Hmmm….if I find more goodies to give away surely I will most likely stick with this new format in the future as it adds an extra element of excitement as the results are broadcast on live t.v. for everyone to see. ^ ^ And in the future we should see the full duration of the events play out as they were intended……Mother Nature..onegai~! ^ ^

Thank you to everyone that entered…a future giveaway may be in the works! ^ ^

Lover and free spirit who's interests in Japanese culture and the like are insatiable. I am of pure Japanese/Okinawan descent, love my cats, sleep and am a bit naughty at times :).
View all posts by MorningBerryz →
This entry was posted in Giveaway, Hello! Project, NASCAR and tagged berryz koubou, daytona 500, giveaway, nascar, sprint cup series. Bookmark the permalink.