I never imagined that NASCAR would be helping me give away a Berryz 工房 single. ^-^

Posted on 2009年1月25日 by MorningBerryz

I was out all morning and just got home and I'm so sorry for not replying to your messages yet but I will be online for awhile now so I can reply to everyone. ^ ^ I'm sorry if it takes me awhile to reach your message as I have about now it's grown to over 50…of them now to respond to and I'll be replying in order. =) 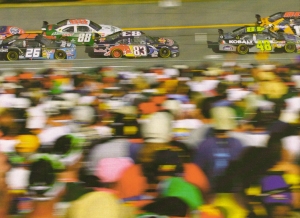 (Hmmm…my 3 favorite drivers are in this photo!)

I've received some really great ideas for what method to use in giving away BK's "Kokuhaku no funsui hiroba" (RE) CD single and the reasoning for fairness has popped and idea into my mind and I think it will also keep a bit of intrigue into whom the winner is!

Okay please don't think me too odd for this idea but what I've decided on is to have each person interested in this CD single to choose two drivers that will compete in this year's Daytona 500 which will be aired on the FOX network on February 15th!! The reason for two drivers is that it'll help to keep from duplicate entries and I'll be taking their combined average finish to determine the winner. ^ ^

The choice of Daytona reflects the need for fairness as along with it's sister superspeeday track Talladega, the best cars don't always necessarily finish the best and on any given lap a driver can go from leading the race all the way back to 35th place or worse…it's an amazing product of the draft and how it manipulates cars and speed and when a driver is left or pushed out of the draft they sink in the field like a stone! In addition there's also a great unpredictability that comes with the large wrecks that occur at restrictor plate tracks such as Daytona where another driver's small mistake on any lap can have catastrophic effects on much of the field wrecking cars that just happened to be at the wrong place at the wrong time. And when it comes to qualifying, unlike many other tracks on the Cup Series circuit, Daytona's starting grid doesn't give much of a clue to where a driver is likely to finish. Take for example Dale Earnhardt Jr. who started dead last in 43rd spot at Talladega a few years ago and 500 miles later he won the race! ^o^ So while it's great to qualify up front that may or may not be any indication of a good finish, so hopefully this reflects a fair way of giving away this single. ^ ^

Oh and I'm also thinking that I'm certainly the only one here who lives NASCAR each sunday so that also makes it fair for everyone else as the drivers for the most part will be unfamiliar to many I'm thinking.

Hmmm….I would share my choices but I'll probably be wrong and that would take away too much of the fun! 😛 Just for reference here are the starting and finishing positions from last year's Daytona 500 and a few other tidbits:

2008 Daytona 500 results: (You can also use the driver links below to view their profiles at NASCAR.COM or go to their official site which is below the race results.

Also note that some drivers may have changed race teams over the off season while some drivers may not necessarily qualify for the 2009 race. In the event that you've chosen a driver that doesn't make the 43 car field, after qualifying you'll be able to choose a different driver in the race. If two entries have the same two drivers and they end up having the best combined finishing average of all the entries at the end of the race I'll then do a drawing between them. ^ ^

All two driver choices must be posted here before qualifying for the Daytona 500 begins the week before the 15th during speedweeks. Thank you! ^ ^

Lover and free spirit who's interests in Japanese culture and the like are insatiable. I am of pure Japanese/Okinawan descent, love my cats, sleep and am a bit naughty at times :).
View all posts by MorningBerryz →
This entry was posted in Giveaway, Hello! Project, NASCAR and tagged berryz koubou, daytona 500, giveaway, kokuhaku no funsui hiroba, nascar, sprint cup series. Bookmark the permalink.

48 Responses to I never imagined that NASCAR would be helping me give away a Berryz 工房 single. ^-^