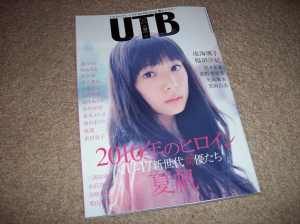 Up To Boy December 2008
Got a call yesterday that the latest issue had just arrived! So I stopped in town after work to pick it up and while my initial thought was…hmm still no H!P member(s) on the cover I was delighted to find pictorials of both Manoeri who seems to be a favorited idol of UTB right now as well as the ever growing beauty, Yajima Maimi. UTB continues with it's restructuring format which seems to differ with each coming issue and I have to say that this latest issue is a teeny tiny bit closer to what this publication used to be like…which is a good thing! ^-^ The idols are being featured in a much more involved layout with articles and the mid section has returned to featuring extras on the issues' idols as well as an array of various articles on other going ons in the idol world. I'd still love to see a return of a much more extensive music review and feature section but baby steps…baby steps. 🙂 Still some of my favorite features are the personal peeks into idol life in a very wide spectrum of ways…….and my favorite article this time around is…… 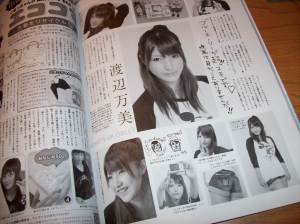 ………..on Watanabe Banbi. Idols are often asked what do they consider to be their best "charm point" and often the answers range from eyes, lips, smiles, hands…..etc. But not Banbichan, who says…チャームポイントは当然 "お尻"…(Charm point wa touzen "oshiri") that her "charm point" is "naturally" her butt! Well at least she's honest! ^o^ Also noted in brackets below is that this marks her butt's debut! Forget the pictorials, now this is great reading! 😛

Manoeri looks simply radiant and the "Kira Kira Manoeri" title states it very appropriately! If she ever chose to take another career path in life surely one in modeling wouldn't be very difficult to get swept into and judging by photo after photo that she's been seen in of late she's just a natural beauty in front of the camera….pretty, comfortable….confident. The brief article covers her 2nd indies single "Lucky Aura" and gives her thoughts on her recent fan club event, "Manopiano", and her live piano performance.

Directly following Manoeri's feature is C-ute's leader Yajima Maimi and hers looks to be an ongoing series of photos…so I'll just call this "the beauty experiment Vol.1" ^-^ Maimichan's beauty in H!P may be second only to one Kamei Eri….erm….just my bias creeping in there! 😛 All indications coming from UTB here is that an upcoming shashinshuu may not be too far away! In any case my belief that …there really should be a photo of Maimichan next to the definition of "cute" still stands. 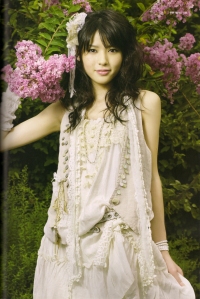 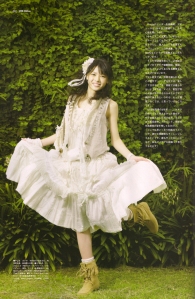 Suzuki Airi and Umeda Erika also get a little collaboration feature where they start off with cute caricatures of one another and then eventually move on to something a bit more…um "realistic" as they sketch each other in a set pose. Hmmm….something tells me that Erikachan graduated from the Kamei school of art.

….Well you decide. ^-^ On the other hand Airiin's free hand sketch of Erikachan is really great and cute. 🙂 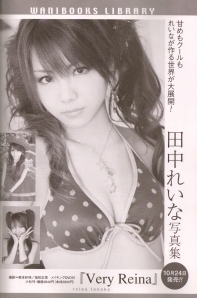 Being that Wani Books (UTB's publisher) is a regular in releasing H!P photo books there are also one page adds (albeit in black and white 😮 ) for both Reinachan's just released (October 24th) and Momo's upcoming shashinshuu releases. Although my copy of "「Very Reina」" won't arrive till about the 5th or so of November when Berryz Koubou's and Arashi's new singles are released, just judging by this ad it looks that Momusu's most well fashioned and accesorized member will be in full glamour once again!

Momo's upcoming shashinshuu which is scheduled for a November 21st release shows Momo here in pure cuteness! And I must say that her hair is at the perfect length!!!!!!!!!!!!!!!!…making her upcoming yet to be titled shashinshuu potentially the most adorable Berryz Koubou pb release to date! There are only three images here but I'm ready to vote yes! ^-^

Lover and free spirit who's interests in Japanese culture and the like are insatiable. I am of pure Japanese/Okinawan descent, love my cats, sleep and am a bit naughty at times :).
View all posts by MorningBerryz →
This entry was posted in Hello! Project, Japanese idols, Zasshi and tagged mano erina, manoeri, momo, shashinshuu, suzuki airi, tanaka reina, tanakachi, tsugunaga momoko, umeda erika, up to boy, up to boy december 2008, utb, watanabe banbi, yajima maimi. Bookmark the permalink.