Posted on 2008年8月8日 by MorningBerryz

Momusu's 2003 calendar themed the "Love Calendar" was the first to not feature any group shots within its months aside from its cover. Their previous calendars from 2000, 2001, and 2002 can be found in these links. Momusu's 2003 release has a soft "heavenly" look to it with the slightly off white background blending in with each members' outfit as everyone wore white for this edition. It may be known as the "Love" calendar but I found it be rather the "serious" calendar as nary a member here dares to crack a glimpse of a smile for the camera. But upon further thought, the "Love" in "Love Calendar" although probably not intended appears to have a direct relation to the "Love" in "Love Machine" in a parallel universe as that cover too had every member looking ever so serious…….or perhaps this is all being over analyzed and all that occurred was that the photographer forgot to say um…"cheese." 😛 I think that perhaps the best way to describe the look and approach utilized here would be to simply call them "portraits" of Momusu. 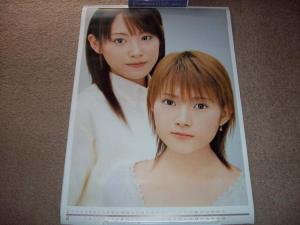 January & February features Nacchi & Aichan and is definitely my favorite page here as we really have only favorite member pairings to go with as the design is incredibly simple and it's hard to believe that just a year ago we were treated to Momusu's "Cafe" theme.

The pairings here like in the past seem to follow the pattern of "veteran + youth" as Keisan is paired with Aibon for the months of March & April. 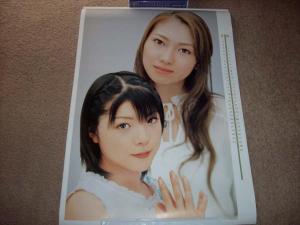 May & June has Kaorin & Makochan posing stoic and Mako seems to have borrowed one of Aichan's favorite poses. 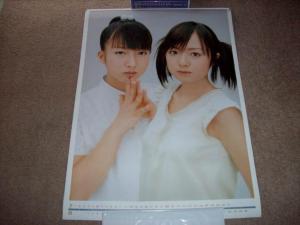 I call the months of July & August the "odd couple" as Nono is teamed with Konkon…..smile?..anyone a smile?…you know you want to!

September & October is the picture perfect pairing of Gen.4 alumni as Rikachan & Yossi were such notable polar opposites in their days in Momusu together and some of my favorite moments occurred in H!M skits whether they were playing Devil & Angel or "husband" and "wife." 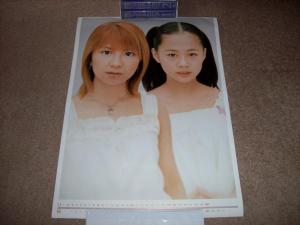 Oh the days of Gakisan's handlebar hairstyle were still with us and I bet she was just waiting for the chance to let her hair down!! Just five years since but she looks so little here that one not familiar with Gakisan further back may think it not to even be her pictured here for 2003's November & December months alongside the beloved Marippe.

2 Responses to Morning Musume “Love” calendar 2003…a look back. (continued)