Posted on 2008年7月26日 by MorningBerryz

With Momo out-idoling the rest of the members of Berryz Koubou and C-ute in "Berikyuu Idol" it was time to see which group held more fan support when the two met head to head in a group vs. group setting where anything and everything which endears you to them as a group and individually was key in deciding a hopefully decisive victor. When the dust settled after about a week of voting it was Berryz Koubou with a 2.7% edge over C-ute crowning them the winners of this BK vs. C-ute group battle. At about the midway point C-ute actually held a 1.8% lead over BK but down the final stretch of votes being cast BK was too much for them to deny victory. I thought it would be interesting to see a little breakdown of the votes cast and I'd like to thank everyone who participated in the voting process in determining the BK vs. C-ute battle debate…well in this little spot of the blogosphere. ^-^

While the presidency here can be won by a candidate with less overall votes in the final tally as winning the individual states and their appointed electoral votes is key in the process, I was curious to see just how BK and C-ute faired had it been BK vs. C-ute for the presidency….hmmm well yes in weirdo land that is! 😛

In all 19 states participated in the voting with Illinois and Kentucky ending in ties. Berryz Koubou's…um "presidential campaign" went quite well as they captured the majority of votes from 10 of the participating states including Florida, Hawaii, Oregon, Kansas, Louisiana, North Carolina, New Jersey, Indiana, Virginia, and Vermont….but would it count for enough electoral votes to win the "election?" C-ute captured 3 less states including Washington, Tennessee, California, West Virginia, Texas, Minnesota, and Pennsylvania but California in particular accounts for a substantial number of electoral votes so just like Dubya did, could C-ute pull out the "presidential" win as well even with less total votes cast for them?

The states Illinois and Kentucky ended with a tie in number of votes cast for each group.

So C-ute would be president had this been a presidential campaign instead of a friendly idol group battle which means that soon Maimai could be issuing you tax rebate checks while Maimichan tries to fix our troubled budget and overseas relations. 😛

And in regards to the majority of votes captured by each group for a particular region, they are as follows:
Berryz Koubou had the dominate vote in: U.S, Mexico, Brazil, Chile, Spain, UK, France, Germany, Finland, Thailand, Philippines, Singapore, and Malaysia.
C-ute had the dominate vote in: Canada, Ireland, Austria, Sweden, Russia, Taiwan, and Australia.
The countries Japan and Indonesia ended with a tie in the voting for both groups.

I've always wanted to acquire this "A Happy New Power" winter 2005 photo set of BK and happily it appeared on auctions so I was able to bid for it…I posted Miya's at the top because hers' is my favorite in this set! I really love Momo's pose too here as well as Risakochan's…because she kind of looks like a cute cartoon character in this set for some reason. ^-^ Here are the rest of the scans and it's nice to have Maihachan still in the group at this point too! 🙂 Congratulations to Berryz Koubou on their group battle against C-ute…and um C-ute on their "presidential" election success! 😛

Maasa's pose is cool too!! 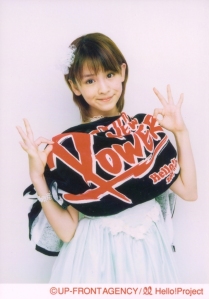