Posted on 2008年7月6日 by MorningBerryz

Well we started off with 14 competitors a few weeks ago and now we're down to the final two. It's interesting how things turned as each group has a member representing them in the final so in a sense it can also be looked at as Berryz Koubou vs. C-ute and the bragging rights to the winner for coming out on top!…..this is, Berikyuu! Idol! ^-^

Ryan: "I am your host Ryan Seacrest…let's get right to tonight's performances!… 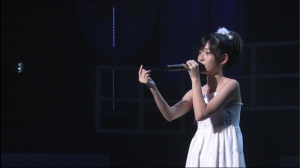 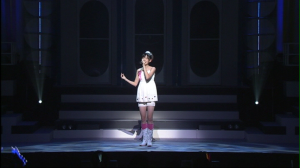 …and now let's here what our judges have to say."

Randy: "Oh man listen dog there's a reason why you're in tonight's final!…check it out you rocked the house again that performance was the bomb!"

Paula: "You know the reason why you're here tonight…..it's because I love you!"

Simon: "This whole competition has been absolutely horrendous…not unlike the time I spent an entire Summer as an honorary Cub Scout and kept waking up with atomic wedgies….at some point though after about the thirty second time it occurs, you realize when you find cute little eyes drawn onto all of your bottoms that it's the little buggers sneaking into your cabin and the room's not actually haunted by the wedgie ghost like you were originally told….little buggers got theirs though when I began handing out atomic wedgies of my own wearing my Batman underoos on my head to disguise my identity….and I really was Batman…..well until I accidentally gave the Scoutmaster a wedgie and was removed from the premises…good times."

…and for one final time let's hear what our judges have to say."

Randy: "Yo Yo Ma! Yo Yo Ma! that was hot dog!…thing's are really heated up now!…yeah dog!"

Yo Yo Ma on Sesame Street

Paula: "Loved the performance!….Love you!…..Love Yo Yo Ma and Sesame Street!"

Simon: "It was sort of like taking Taco Bell and a large bag of apricots on a camping trip with your buddies….fun times at night and it even keeps the bears away when you sing koom baya…unfortunately you find yourself sleeping outside the tent though….good times Ryan, good times."

Ryan: "Whoo! I was wondering where that scent was coming from…..o__O…So there you have it, your final two….and the voting for the first Berikyuu! Idol begins and will be open until July 11th midnight…..will it be a Berryz Koubou or C-ute member out on top?!…Your votes will decide…I am Ryan Seacrest and I am out!"

Lover and free spirit who's interests in Japanese culture and the like are insatiable. I am of pure Japanese/Okinawan descent, love my cats, sleep and am a bit naughty at times :).
View all posts by MorningBerryz →
This entry was posted in Berikyuu!, Giveaway, Hello! Project and tagged berikyuu! idol, berikyuu! idol season 1, berikyuu! idol the final two, berryz koubou, c-ute, giveaway, h!p, hello! project. Bookmark the permalink.