Posted on 2008年6月26日 by MorningBerryz

…start with an r&b flavor….add two leaders, one captain, bring to a boil stirring occasionally….let simmer, add one Yankee (concoction should boil on its own!)…top with one egg and serve while still hot! Was there really any doubt just how well tuned this new H!P unit would prove to be? While an incredible lineup alone isn't a guarantee for greatness…(see our last few Olympic basketball teams! 😛 Sorry USA basketball we'll do better this year! ^-^) the grouping of these five particular members promised a surefire unit…I mean how could they not! With respectable sales reaching 30,037 units for their debut effort I truly hope that High King doesn't fall into the one shot H!P category where a few predecessors of this nature have gone before….Gomattou and Romans come to mind as the makings of a super unit seemed to be the plan with these units as well, however the similarities do end there as High King is such a well polished, sleekly presented, and well presented unit which surpasses those past efforts.

Aside from the appearance of this unit which is filled with smoldering hot!…what becomes apparent the moment that you see the dance shot version of "CC CinderellaComplex"'s pv is how UFA has assembled some of the best all around dancers H!P has to offer and what's even more impressive is…………

….the amazing dance ability of H!P Egg Maeda Yuuka who until a few minutes ago was just a very cute face on a UFA photograph that I have in my UFA Egg photo collection. The limited edition of High King's release includes a DVD which contains the dance version of their pv and I was waiting for them to cut at any moment while watching it but then soon realized that the stationary camera remains just that and the entire clip was shot in one cut with no edited together pieces! One other note that I'd like to make is that this pv was also shot in true 16:9 widescreen making it a rarity in H!P as far as music videos go (Buono! produced by Pony Canyon initialized the widescreen format in music vides and I was so hoping that the rest of H!P would follow suite one day!…perhaps this is a sign of a change to widescreen?…hopefully!), as the norm has been the standard screen format which really doesn't take advantage of the amazing appearance that a wide angle shot with units numbering many members (which many H!P units possess) can bring to the screen. Just imagine if all H!P pvs had been shot in this format!…so many of them would've benefited and members wouldn't have on occasion disappeared off to the sides of the screen either. Now it has been long known that Aichan and Maimichan are two of H!P's most talented dancers but with this cumulitive group of all stars plus one very talented Egg I must say!…the amazing routine is produced to perfection and not one single member here is a weak link as there simply aren't any. 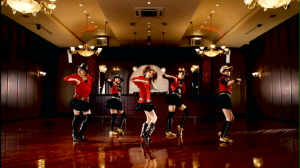 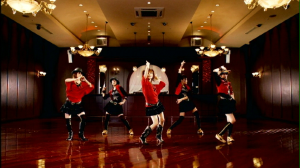 "CC CinderellaComplex" incorporates a most advanced and stylish dance choreography which after further viewing I have to say is perhaps one of H!P's most complex to date…no pun intended! 😛 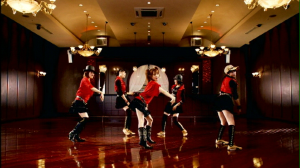 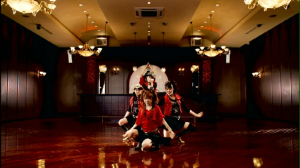 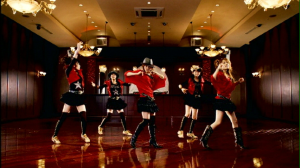 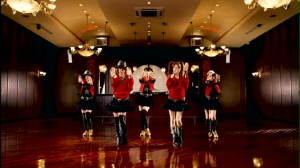 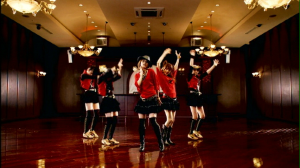 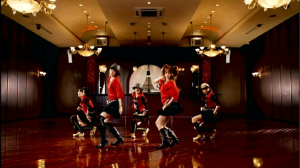 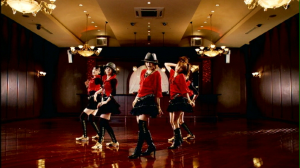 The song's strong r&b groove works seamlessly with the dance routine as if a happily married couple and the overall maturity of this song is most impressive and awe inspiring, standing tall even amongst Tsunku's past musical compositions in this particular genre. Reinachan, the groups' noted leader brings the sexy to High King in the most powerful fashion! I mean Reinachan's always been cute, sexy, and fiery but her aura of heat here is like that shot out of a cannon and it towers above everyone else in this unit which is saying quite a bit…as the likes of Aichan and Maimichan are also present, but Reina in all of her Reinaness can't be denied the scorching award here it's just too overwhelming!! The title track is also vocally a very sound production and among the maturity heard from the unit's four elder members, Maeda Yuuka adds a sweet touch of her own in pre-chorus solo tidbits…I'd have given her more solo lines as these little vocal lines add quite a contrast and a cute one at that when heard next to the other member's solo and ensemble vocals. ^-^

The coupling with song "Kioku no meiro" which was also penned by Tsunku takes on a much more techno dance flavor and this high energy track is graced with an infectious chorus and well driven hooks in the verses as well…really could have been stated as a double a-side I think.