Posted on 2008年6月22日 by MorningBerryz

Haha it took me about 5 hours to write, upload and scan this.. 😛 what is wrong with me?!! The original posting at Cutie Party can be found here at Misa’s blog. I was thinking that since you state the reason for this survey being an interest to find new J-Pop artists/groups to listen to outside of Hello! Project I would make sure to try and not mention them although they may creep into answers here because it just can’t be helped as H!P runs through my veins I’m afraid. 😛 But still I’ll try to make a conscious effort here…really really try not to mention H!P! :P…as they could appear in numerous answers here if I don’t properly restrain myself!

1. What was the first Japanese song that you ever listened to? 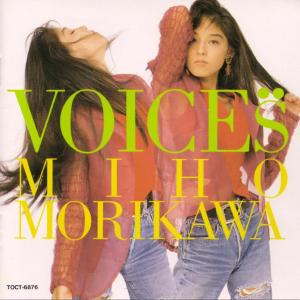 …Morikawa Miho’s best of compilation titled “Voices…”, there it was on the shelf at Tower Records and I purchased it because I thought the cover looked nice…so much for deep thoughts. 😛 Looking back it’s a good thing that I enjoyed this album a lot!…because had that not been the case there’s no telling where J-Pop and I would stand today although I do imagine that it would have crept up on me in some other way over the years.

Track one is “Blue Water” and this is literally my first, first hand experience of J-Pop. Right from the start you’ll notice just how powerful, unique and memorable her vocals are and thus my love of J-Pop was born! ^-^

Track 8 “POSITIVE” may be a familiar one as it was used as a theme for the popular anime “Ranma 1/2.” 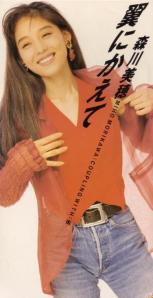 And lastly here’s the final track on “Voices…” titled “Tsubasa ni kaete” which was also released as a single (scanned above)…ah I miss the look of 3″ CD singles and their unique casings which were once upon a time the standard release format for singles in Japan.

2. Did it inspire you to like that group/singer, or did it turn you away?

It was love at first listen and I actually went on to purchasing 10 more of her albums as well as one more single which makes up my Morikawa Miho collection today.

3. What is the one song that you have been listening to for the longest time?

This is a really tough one….I’m  going to go with a song that I knowingly have put on numerous compilations that I’ve made over the years and that would have to be… 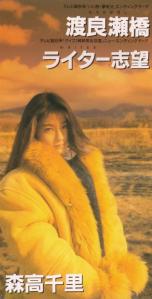 …Moritaka Chisato’s “Watarasebashi” which was originally released on January 25th, 1993. It would take me a few years but I would finally complete her album and single collection. 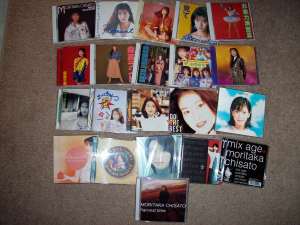 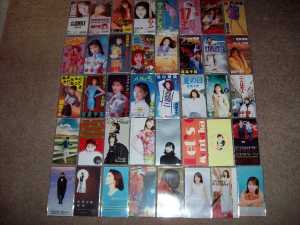 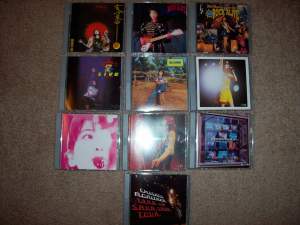 Moritaka Chisato has had a great connection with Hello! Project over the years as Minimoni covered “Rock n’ roll kenchou shozaichi”, Nacchi covered “The Stress” and both Gocchin and Ayaya have recorded versions of “Watarasebashi” which is my favorite Moritaka Chisato song of all time.

Here’s a translation of “Watarasebashi”

You loved to watch the setting sun from Watarasebashi Bridge.
You said, “You’ve grown up in a beautiful town. I want to live here.”

You would come to this town aboard a train to see me.
I live with the memories of those days in my heart.

Whenever I go to the Yakumo shrine, I still pray for you.
If one of my dreams came true, I should go back to those days.

Do you remember the public telephone standing at the corner of the barber’s?
Yesterday I came to feel like calling you up and picked up the receiver many times

The other day I went down to the shore of the Watarase River and watched the water running down for a long time.
The north wind was so sharp that I caught a cold.

Neither of us is responsible for our parting.
I knew that you could not live in such a rural town.
Many times I thought over whether I should accompany you or not.
But I cannot live in a big city, leaving here. 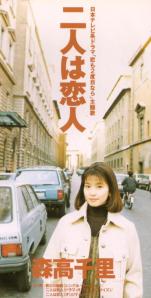 And here’s another much favorited song by Moritaka Chisato…”Futari wa koibito.” Simply one of the most catchy and well written J-Pop songs ever. Edit: Ah and I forgot to mention originally when I saved this post that Moritaka Chisato also plays the drums on many of her recordings and is also talented on the piano and yes! the recorder as heard in “Watarasebashi.” ^-^

4. What group/singer have you liked the longest?

This would have to based on some of my earliest J-Pop purchases and whether those artists had a longevity holding my interest…lets see: Impossible for me to list just one so there’s Zard (a few songs are available there for you to listen to), Sakai Noriko (her “Words of Love” pv)…and I’ll include a song by her a little later in this survey, Moritaka Chisato, Ozaki Yutaka love his music!!, CoCo (post covering them forthcoming), Ribbon (hopefully a Ribbon post forthcoming too!), Smap, Amuro Namie (post includes a few songs to listen to), and Mr.Children (post linked later in the survey). I could really go on and on but I fear you may fall asleep before I’m done. 😛

5. What is the song with the most plays on your itunes/media player?

The low tech soul in me doesn’t even have a loaded ipod or portable media player :P…so I’ll have to think a bit here…most played? Okay! here’s a strong candidate for that answer: 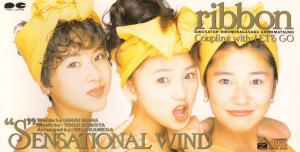 Ribbon’s awesome single “S”ensational Wind! A group really deserving of a complete post here but for fear of having this survey turn into a journey rather than a read I’ll refrain and hopefully post something on them at a later date. ^-^ Just briefly here, Ribbon was one of the top girl idol groups which remained active until the mid 90’s and with incredibly catchy songwriting and the impressive vocals of Satou Aiko, Nagasaku Hiromi (now married to the drummer for Mr.Children!), and Matsuno Arimi, Ribbon is one of the great landmark idol groups of all time.

6. Is that song your favorite?

It’s my favorite song by Ribbon…hmmm…deciding on a favorite J-Pop song of all time would be difficult indeed as I’d have to go through over 1800 J-Pop albums and singles trying to decide that, the product of collecting J-Pop for about 15 years.

Ah too many to choose from! 😛

8. Is there any one group that you can listen to all/most of the songs by? If so, who?

No doubt it’s Mr.Children. For me they can do absolutely no wrong…love every album, ever song…such diversity. The Mr.Children post linked here is my personal most beloved post that I’ve ever written and I guess that makes sense since they rule my universe! ^-^ (my personal attachment to Mr.Children explained as well as 11 songs are available to put on your media player at this post also).

9. What is your favorite agency?

Haha okay I’ve restrained myself for as long as I could during this survey!!!… :P…Up Front Agency and Johnny’s Entertainment.

10. What is your favorite group/singer? 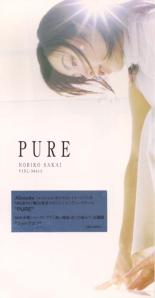 From my favorite female vocalist Sakai Noriko…”Pure” is an amazing single that resembles a double a-side as the coupling with song “Photograph” was written by former Princess Princess members Tomita Kyoko and Okui Kaori lyrics and music respectfully while “Pure” was co-written by the very talented Fujii Fumiya! 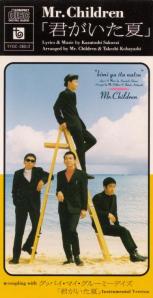 And last but definitely not the least (the most actually!) is Mr.Children. First here’s “Love” which has a sound reminiscent of The Beatles…for some reason VOX wasn’t allowing this file to be uploaded so after 3 tries I’ve uploaded the song here instead…I’m still using my brother’s “big 808 monkey account.” The file is an mp3 and I promise it’s worth the time getting it! ^-^

and next is their debut single “Kimi ga ita natsu” (pictured above) which is a beautifully written timeless song and one of the finest band debuts ever. 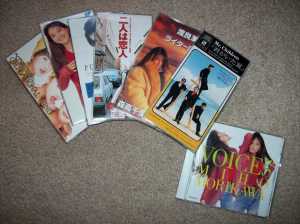 001-6.jpg
The end. I hope you enjoy the songs Misa and everyone else too and perhaps create new fandoms out there! ^-^