Posted on 2008年6月21日 by MorningBerryz

I first saw these "Dschinghis Khan" t-shirt designs on Paul's Hello! Blog as he always has the first news of special releases! And to go along with these sets are also numerous little clips promoting them that were originally on Dohhh Up! which have migrated to YouTube since…hmmm actually the clips are mostly of them goofing around and having fun but since they're wearing these designs I kind of took that as advertising. 😛 I've embedded 6 of the clips at the end of this post but first of all these shirts! I was having a tough time deciding which color and design I liked better so as any obsessed Berryz Koubou fan would do…I purchased both of them. 😛 I actually was leaning towards the black design first but because the red t-shirt set comes with photographs I totally folded.

Both fronts have the signature "Uu!! from "Dschinghis Khan"…

…while the backs have the "Ha!!" written on them. Interestingly the black design opts for the writing in Japanese while the red has it written in English characters.

In addition to the "Berryz工房" logo adorning the backs the left sleeves also feature the song title written in katakana. I can't remember which member it was at the moment but one of them makes sure to point out the writing on the sleeve in one of the little clips which will follow the photos here…Kumachan?

I still can't quite decide which color and design I like better or which I'll wear first…..and I wonder how puzzling this shirt may seem to non BK fans out there when I do wear them.

And now for scans of the photos which are included with the red t-shirt set…I just had to have these because they're wearing the shirt!: 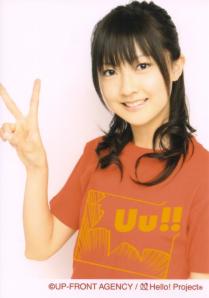 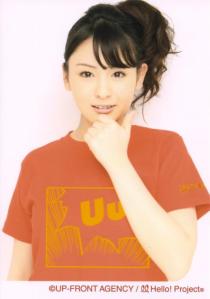 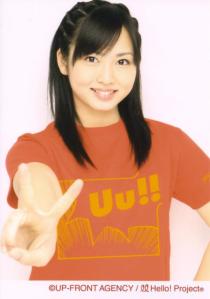 Okay and now for those 6 little clips…these are just really fun and cute to watch and Riichan in particular is quite amusing in hers….LOL! I love when she runs back down the hall after…um…embarrassing herself a little! ♥

And this clip was designed to make sure everyone knows that the t-shirt's design is two sided. 😛

The red design makes an appearance here!…and it's that choreographed swirling motion being done by a few of the members…Momo is also featured in the..um "remix" portion. ^-^

And in this clip the Captain and Chiichan expand on the dance routine so that everyone can practice before going public with their dance! =)

And in this last clip Miya has a secret to tell you…. 😛

Lover and free spirit who's interests in Japanese culture and the like are insatiable. I am of pure Japanese/Okinawan descent, love my cats, sleep and am a bit naughty at times :).
View all posts by MorningBerryz →
This entry was posted in Hello! Project and tagged berryz koubou, berryz工房, dschinghis khan, h!p, hello! project, kumai yurina, miya, momo, natsuyaki miyabi, shimizu saki, sudo maasa, sugaya risako, t-shirts, tokunaga chinami, tsugunaga momoko. Bookmark the permalink.