Berikyuu! Idol The Final Six “Idol heads back to the stage.”

Posted on 2008年6月19日 by MorningBerryz 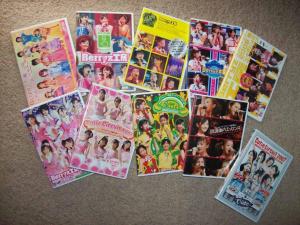 Sorry about the delay but my intention was to have the "Final Two" showdown occur nearer to the release date of the Berryz Koubou and C-ute battle concert DVDs which would make the wait for the winner who'll be receiving one of these concerts (BK or C-ute version…the choice will be up to the winner) a bit shorter…so without further delay, here's a look at the final six who've survived the competition so far. It all started with a morning of browsing through some of my BK and C-ute concert DVDs finding a select few performances for "our" judges to take a look at.

Ryan: "Looks like Paula's back and so is the music…..this is………………..Berikyuu! Idol! Remember at the end of the show you'll have a chance to vote for your top 2 picks whom you'd like to see make it into the finals… 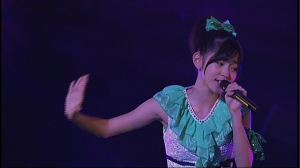 …Airiin will be performing "First Kiss", a hidden gem in Hello! Project's catalog which was originally released by Aa! way back in 2003 and here we have a much more developed and mature approach to the vocals… 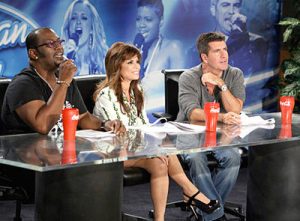 …and now for our judges reactions."

Randy: "Yo man yo that was the bomb!!!…you just keep on churning out these great performances and you've just set the bar really high for tonight's performances!"

Simon: "Well the outfit was nice…it made me feel like I was at a Disney theme park for a moment but then I realized it was Paula and not Goofy who was patting me on the bum just now…or was that you Ryan?!"

Ryan: "…..O__o…and to think Paula and Goofy are actually two separate individuals……our next finalist hopeful is…

…and now let's hear from our judges…"

Randy: "Yo man yo man yo yo man!…you rocked the house again!!…listen that was hot, a little pitchy at times but overall a solid performance!"

Paula: "Did I get to tell you the very first week how much I love you?…….I think I love you even more now."

Simon: "….So while Paula's writing you a Hallmark card I'm going to very honest here….it was absolutely ghastly, kind of like the time some kids pushed me over the fence at the petting zoo with ice cream cone in hand….he fought valiantly but the monkey was no match for me that day and I think he was just about to tap out when security took me away, he got lucky….good times."

Ryan: "…And you wonder why the monkeys always seem a bit agitated at the zoo….our next idol competing for a place in the final two is Momo who'll be performing the cutest version of "Koi wa hipparidako" the world has ever seen!…

…now if this isn't cute I don't know what is…

……and now let's see what our judges thought…"

Randy: "Yo Yo Ma! Yo Yo Ma!……wait I think that's that classical musician..I meant yo man yo! you were like a little helium balloon on stage…the little engine that could! Yo dude that was hot!"

Simon: "Utterly utterly horrendous……very eeriely similar to the time both I and Chevy Chase were auditioning for a part in the latest Alvin and the Chipmunks movie, we both had our eyes set on the same chipmunk role and when a fight broke out in the parking lot I taught him what the monkey almost learned the week before at the petting zoo…never touch a man's ice cream cone or fries."

Ryan: "Thank you for that bit of advice Simon and we'd like to apologize to all monkeys and chipmunks out there on Berikyuu! Idol's behalf….our next idol up is Miya who'll be performing another Ayaya classic "Tropical koishite~ru"… 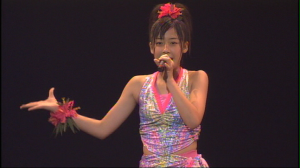 ….aw such a cute performance!…and now for our judges thoughts…"

Paula: "What can I say…I just love you more and more every time I see you which means that I love you twice as much as I did during week one."

Simon: "The lovey dovey stuff is all nice but I'd have to say the whole thing was quite excruciating and I have to question the flower atop your head to begin with…completely pointless as I found out about a month ago when I wore one exactly the same way to a staff meeting…everyone was all laughter until I they got wind of my easy bake oven…the message was quite simple that day, quiet down or no one eats any imaginary food…good times."

Ryan: "And just for the record I for one was very well behaved that day and got to eat some of Simon's imaginary food…."

Simon: "And if all goes well tonight Ryan…I'll make you one of my new southern style Play-Doh sandwiches ^-^…"

Ryan: (^o^)/ "Getting back on track, our next idol tonight is Sakichan who'll be joined by Miya in a performance of "Sprinter!"…. 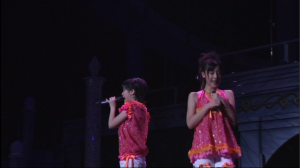 …and now for our judges thoughts…"

Randy: "Yo yo yo dude man yo that performance was the bomb!…I thought you harmonized very well together dude and I was feeling you there, that was hot!"

Paula: "I'm just so in love right now!…I love every thing about your performance and I love you too!"

Simon: "I have to disagree…I thought the whole performance was a bit like a container of "Monkey Butt" powder…..embarrassing to purchase but good for the long car ride."

Ryan: "Next up is our last performance of tonight and we'll hear from Maimichan…right after the break…..

Ryan: "And we're back with Berikyuu! Idol and as promised our last idol performance of tonight belongs to Maimichan who'll be performing "Natsu DOKI Lipstick"…

…and now for our judges reactions…"

Randy: "Yo man listen dude the song selection was a bit questionable but you made it work dog!…great dance routine that was hot!"

Paula: "What can I say which hasn't been already been said….I really really love you is about all I can think of."

Simon: "Now that ghastly song is going to be stuck with me for the entire car ride home and probably well into tomorrow…it really reminded me of the last road trip I went on where there was so much crying and screaming to reach to next rest stop and when everyone finally had enough of my crying they dropped me off and left but a nice trucker soon took me along cross country even though I just lived a couple of blocks away…and it's a good thing that he had some Monkey Butt in the glove compartment…the best time really."

Ryan: "So there you have it, your final 6 idol hopefuls…please don't forget to vote for your favorite two idols whom you'd like to see advance to the final as the four idols with the lowest vote total will be getting the boot off of Berikyuu! Idol. Voting will remain open until June 24th, midnight…I am Ryan Seacrest and I am out!

Tonight's show was proudly brought to you by:

Monkey Butt when there’s just no other alternative! :O

Lover and free spirit who's interests in Japanese culture and the like are insatiable. I am of pure Japanese/Okinawan descent, love my cats, sleep and am a bit naughty at times :).
View all posts by MorningBerryz →
This entry was posted in Berikyuu!, Giveaway, Hello! Project and tagged berikyuu!, berikyuu! idol, berikyuu! idol season1, berikyuu! idol the final six, berryz koubou, berryz工房, c-ute, giveaway, h!p, hello! project. Bookmark the permalink.

12 Responses to Berikyuu! Idol The Final Six “Idol heads back to the stage.”