Posted on 2008年5月3日 by MorningBerryz

I'm so happy to see Mikitty back in the recording studio and while "Okitegami" isn't your typical H!P pop release I still hope that it's a sign of her true return from the dreaded H!P exile island where she was sent for having a relationship…(insert sarcastic Mikitty look or just the "look" will do!). And while many others are happy about her return as well, what saddens me are her low sales totals for this single release. The last time she released a solo single albeit way back in 2003 she was up in the 50,000 units sold tier! Understandably the genre of Japanese folk music in which "Okitegami" delves may not be as endeared to the younger generations of fans and that may be due to either just the sound of it or perhaps a lack of being brought up with it could factor in as well. After all Mikitty as a H!P artist has for the most part been a "pop" artist so this may present unfamiliar territory for some. That being said, Hello! Project is no stranger to the traditional sound of Japanese folk music or Enka which has in the past made it's beautiful appearance in Nakazawa Yukosan's early solo releases which included an album and 3 singles all sung in this style as well H!P's "Folk Songs" series and the ever wonderful Christmas collaboration with Itsuki Hiroshi and Horiuchi Takao!…which can be found here in an earlier post. And speaking of Horiuchi Takao…he's the one sharing this new release with Mikitty as each has their own solo versions of the single. 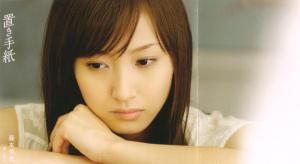 "Okitegami" is written purely in the Enka style however Mikitty's vocals aren't emulating the genre as deeply as anyone familiar with Enka will immediately hear. In this way it's a meeting of Enka and pop in a seamless marriage that works perfectly and whether it's Mikitty's vocals that just don't suit the Enka style or if done rather by choice in an effort to sound more contemporary it really doesn't seem to matter here as the blending of styles creates a lovely ambiance. And while a distinct aspect of Enka are powerful vocals with deep vibrato here Mikitty delivers her own style of strong vocals making "Okitegami" perhaps a song for only a select few in all of H!P…Ayaya, Aichan, and Yukosan immediately come to mind as other H!P members whom this song would also suit very well.

Enka music is a deep seeded part of Japan's culture as this early form of "pop" music continues in its popularity today and a perfect example of this would be it's prominence in each end of year Kouhaku event held at the NHK Concert Hall on New Year's eve where typically over half of the performances in the past have been of this genre. I grew up around Enka and not by choice as it was always being watched at my uncle's home on New Year's Day (the Kouhaku  is broadcast here in Hawaii the day after the event) where my parents would take us to visit each year when I was a child and admittedly when I was younger I really didn't take a particular liking to the sound of the vocals as I always thought that they sounded odd and "strained." 😛 But as is in life things change with you…one day you dislike peas…then you find yourself eating them like they were going out of style! Come on Momoko try a green pea again!!! ^-^ So as time passed and with a continued annual exposure to it…slowly but surely I became endeared to the sound of Enka music and today I really love the sound of it and I look forward to many of the performances on the Kouhaku.

The coupling with song "Tooi koibito" which means "Distant lover" is much more in the vein of a contemporary ballad and doesn't share the Enka stylings of its title track…Mikitty's vocals are immaculate as always as she balances power and a vulnerability expressing the heartfelt lyrics beautifully. And the two songs together give this release a nice balance I think as it not only may possibly introduce some to the world of Enka but also it keeps the "pop" aspect making the transition that much more appealing to those not familiar with this classic genre of Japanese folk music.

As "Okitegami" is a dual release, one featuring Mikitty while the other features Horiuchi Takao, 2 separate pvs have been produced and an interesting point to add about the CD single which Saburo first pointed out to me is the inclusion of a lower key karaoke track specifically for the male vocal version as well as the original karaoke track. Horiuchi Takao (aka "mustache guy" by Saburo 🙂 ) is somewhat of a tradition in Enka music…celebrated for years as he made his 17th appearance on the Kouhaku this past year and likewise so is his mustache! Kidding! 😛 Anyway here's his version below. 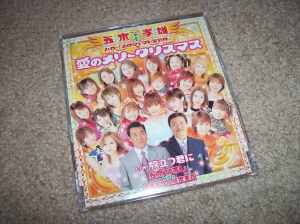 Here's their earlier Enka meets H!P release which featured Itsuki Hiroshi and Mustache guy…I mean Horiuchi Takao! And an additional link to the song can be found in the Christmas post link which I've added above.

This is such a beautiful song and the blending of youth with Enka veterans Itsuki Hiroshi and Mustache…I mean Horiuchi Takao creates a really sweet and diverse song! Various H!P members are also featured with solo lines along with the choir…enjoy! ^-^

And as I'm currently in full Mikitty love mode I've also been watching her pvs and while "Boogie Train '03" may be the cutest pv with guest appearances from some very familiar faces!…my favorite Mikitty pv is for her single "Romantic ukare mode." I love everything from her hairstyle, outfits, the sets used, and of course most importantly the song!

Have a great weekend everyone! ^-^

Lover and free spirit who's interests in Japanese culture and the like are insatiable. I am of pure Japanese/Okinawan descent, love my cats, sleep and am a bit naughty at times :).
View all posts by MorningBerryz →
This entry was posted in Hello! Project and tagged ai no merry christmas, enka, folk songs, folks songs 3 live, fujimoto miki, gocchin, gomaki, gotou maki, h!p, hello! project, horiuchi takao, itsuki hiroshi, mikitty, okitegami, tooi koibito. Bookmark the permalink.

2 Responses to Fujimoto Miki’s “Okitegami” features a reuniting of Enka and Hello! Project.