Posted on 2008年5月1日 by MorningBerryz

Since I've been in a sort of an anime mood lately I thought that this would be a good time to mention a few of my favorites including my favorite anime series of all time!…"Tenchi Muyo!" Admittedly I don't own or watch a whole lot of anime so my knowledge here is really limited to just a few series but I've just never watched any anime series this amusing! While the "Tenchi Muyo!" series has spawned quite a number of spin off series which sometimes focus on a singular character as well as new generations of series and movies it's the original t.v. series which went up to episode 13 that I love so much! Outstanding writing filled with humor, intrigue, and wit fill the storyline and the character development in particular is a real shining spot for this series as the viewer is sure to become endeared to the many colorful and sometimes offbeat personalities which occupy this anime throughout! And while some series can sometimes suffer from too many new character introductions…Tenchi Muyo! strives on finding the perfect balance and with a really relevant development of each character the story unfolds in a manner which makes sure the viewer never feels overwhelmed or worse!…underwhelmed.

Above is my Tenchi Muyo! VHS collection which were packaged so well as each cassette comes housed in an extra large hard case but the real beauty of these releases are…

…the postcards and large fold out posters which are included with each volume. Character design, story board development, as well as environment depictions are shown from a production stand point giving a nice share of extra insight into the series while bringing fans closer to the series. 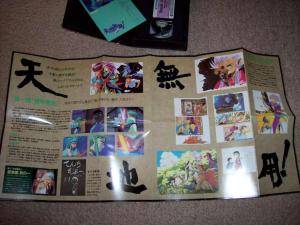 Tenchi Muyo! VHS extras!
But as the VHS format is susceptible to deterioration over time seemingly no matter how much care is taken or what storage environments are used or even how little they're played… 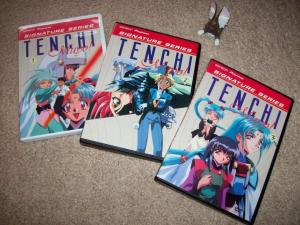 …happily about 4 years ago the original t.v. series (titled: "Signature Series") including all of the original episodes were re-released on DVD! I'm still missing volume 4 though! And it's so much less expensive to own this part of the series on DVD versus the original VHS format which were quite costly to collect but the only downfall here is the loss of the postcards and informative posters which accompanied the original releases…still it's much better to own them on DVD for sure! ^-^ 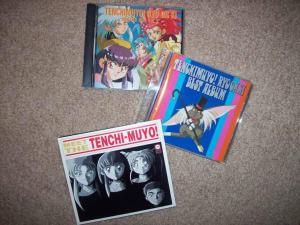 The series features great theme songs which anime fans have come to appreciate and expect from their most endeared shows and Tenchi Muyo!'s opening and closing themes don't disappoint! And as is the case with numerous anime series these songs are performed by voice actors who are also voicing characters in the anime which adds to their appeal greatly. I own 3 of the soundtracks from this series and what's inventive about some of the songs is that some are purely original tunes which were penned specifically for the characters although their appearance in the series is non existent. So what you have here are original songs written as personality pieces in some occasions making for quite an unique listening experience once you get to know the different characters in the anime! The "Meet the Tenchi-Muyo!" album above cutely depicts a Beatles cover…can anyone guess which one?! ^-^…and the inner sleeve artwork takes it a step further depicting their "Let it be" cover (below). ^-^ 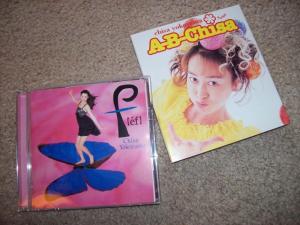 Yokoyama Chisa  voices the character "Sasami" in the series and her seiyuu resume is incredibly impressive as she's been involved in so many series! Her voice in a sense really "defines" anime…just one listen and you'll know what I mean! ^-^

"Renai no sainou" which means "talent for love" is the closing theme for the original Tenchi Muyo! series and provides the perfect introduction to her vocals as well as a bit of the anime's special charm!

Now wasn't that cute!!…Ryo-ohki farming what turns out to be the largest carrot anyone's ever seen all through the harshness of the seasons! ^-^ Click here  for the mp3!

I believe that some of if not all of the episodes are already uploaded which would provide a fun preview for anyone interested in seeing this series but I whole heartedly would recommend purchasing as it's so entertaining to watch!! The original series can be found here at Amazon.com just be sure to look for the 4 volumes titled "Signature Series."

Two other anime features that I would like to mention as favorites of mine are "Ninja Scroll" and "Dragon Half." "Ninja Scroll" is a spectacular display of stylistic Japanese animation coupled with great storytelling and unforgettable characters. Jubei the central character in this movie faces numerous demons who possess unearthly abilities making for intriguing and creative encounters throughout the story and while I can be really bad at giving too much away I'll make sure not to in this case and therefore I'll leave it at that. Highly recommended! ^-^ The DVD features both an English and Japanese track along with English subtitles…the original Japanese language track is much better though. 🙂

"Dragon Half"….I really wish that I had this on DVD as it's the most outrageous…mind you rated PG anime movie that I've ever watched. The story is so wonderfully "out there!" with characters with dialog that'll make you really laugh and smile at the same time! "Dragon Half" is filled with the wonderful animation style of incorporating well timed…purposely "silly" looking animation to help further depict the over the top silliness of the countless situations that occur in this hilarious movie! ^-^ I'm not sure how to quite describe that any better and I'm hoping that you'll understand what I mean. 😛 While everyone is most likely familiar with the famous "tear drop" which appears in embarrassing or odd situations for characters in anime…this movie takes that notion to the extreme with deformation of characters' appearances and a lot of offbeat humor fed along the way. ^-^ If anyone else has seen this movie please tell me that I'm not crazy and this movie is really that funny! :P….I just don't know anyone else who's seen it before so you could be the first to help me here! ^-^ Anyway I absolutely crack up every time that I watch it no matter how many times I've seen it before. 😛 Hmmm…maybe I need help. 😛

Lover and free spirit who's interests in Japanese culture and the like are insatiable. I am of pure Japanese/Okinawan descent, love my cats, sleep and am a bit naughty at times :).
View all posts by MorningBerryz →
This entry was posted in Anime, J~Pop and tagged animation, anime, dragon half, j-pop, ninja scroll, renai sainou, talent for love, tenchi muyo!, yokoyama chisa. Bookmark the permalink.