Posted on 2008年4月2日 by MorningBerryz 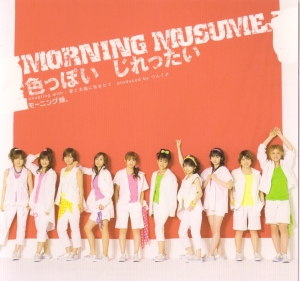 Recently Wu-san and I got to talking about favorite live versions of H!P/Momusu songs and how H!P hasn't tapped into the possibility of producing a live album whether it be from a single show or a compilation of favorites and with this idea I've thinking about creating a personal live "album" of favorites. But with a project such as this comes the challenge of going through all of these…

Most of my H!P concert DVDs…I think…
…concert DVDs and something tells me that I may have forgotten a few as they're kind of all over my room. 😛 Well while going through the 61 H!P concert DVDs above and the 2 concert DVDs below is going to take some time that project may sit on the shelf, literally for awhile but in the meantime I've finally managed to extract the performance of 「…sukidayo!」 from Rikachan's sotsugyou concert for Wu-san which is actually part of a medley, a little past midway through the concert. It took me awhile to figure out how to trim video files as I just had no idea how something like that was done…:P…and along with that I was also able to create an mp3 file and both can be found later in this post.

While locating the medley track on Rikachan's graduation concert DVD I began watching some of the other performances as well as it's been quite awhile since I've actually watched this concert, something that is largely due to the fact that H!P releases so many things!…and it's just difficult sometimes to re-watch anything as just trying to keep up with the new releases can be a challenge…but a happy one of course! ^-^ And with remembering what a great time 2005 was for Momusu, I went to my shelf to also get their "2005 Natsu Aki" concert and into my laptop it also went! Graduation concerts are bitter sweet memories but I always love watching them as they bring both joy and tears for the members and for me as well and it doesn't matter how many times I've watched one of these as they always manage to destroy me with heartfelt emotions. And through individual member reactions during the graduation ceremony where each member presents flowers and a message to the member leaving the group, you can always get a great feel for which member(s) in particular were closest…think Aichan during Gomaki's graduation. She looked so sad on stage and afterwards while they were trying to interview her backstage she was unable to speak a single word and just kept staring at the ground the entire time until the interviewer finally let her be.

Getting back to the idea of creating a live H!P album, this would of course include all H!P groups/members from my concert DVD collection above….hmmm anyone want to help me? 😛

I've uploaded just a few clips from Momusu's two 2005 concert DVDs and I'll start with "Iroppoi jirettai" which opens their "Natsu Aki…Koharuchan irasshai!"  DVD. Wu-san, while you did mention how you'd love to have seen a live performance of this song with its original members…this is the closest that I can get you to that although I know this isn't what you really meant.

One of my absolute favorite performances from this entire show has to be Yossi's "solo" rendition of "男友達" where she is joined on stage by Kamei, Sayu, Reinachan, & Kohachan who act in a backup capacity!! If anyone ever was unsure if Yossi would be able to project the image and have the vocal ability for a solo career…this performance I think will answer all questions as she really shines here!! And speaking of shining…Kohachan is so adorable on stage throughout this concert and it being her "introduction" show makes it that much more special and a must have for any Kohachan fan! ^-^

I love this song so much and I've created an mp3 from the live track in case anyone wants to save it…and being that H!P hasn't released any live albums to this point, I think this should be okay.

And since we're listening to Rikachan leading the vocals of Morning Coffee I thought I'd also include her Best Shot DVD version as well which is really cute!…along with the separate audio track which I've extracted from the video file. I love this pv as you get to spend a day of shopping along with Rikachan! Haha that bubble bed thing is strange…I want one!! 😛

Okay and now for something that Wu-san really loves!! ^-^…no not Kamei! 😛 but rather Momusu's performance of 「…好きだよ！」 from the medley which also appears on Rikachan's graduation concert ("Concert Tour 2005 Spring 2005.05.07 at 日本武道館…") For the video clip I edited it to only contain 春の歌 and 「…好きだよ！」. The performance of "Haru no uta" begins with Aichan, Yossi, & Rikachan who I think you'll agree sound amazing together and their harmonies are just beautiful!!! The rest of the group joins in for the performance of 「…Sukidayo!」 and the arrangement as Wu-san mentioned earlier is from the Best Shot DVD series…only in this version, happily there's no dialog over it! 😛 The arrangement really reminds me of Earth Wind and Fire. ^-^ Keep in mind that these 2 songs are part of a larger medley and therefore are edited accordingly. The audio track which follows only includes the performance of 「…Sukidayo!」as Wu-san requested and I was having the most difficult time trying to clip the ending of the track right at the end of the song before "Souda! We're ALIVE" begins …and after about a half hour of trying I finally found that this is the closest the program I'm using allows me to get, without losing any of the ending of the song so the initial drum beat of "Souda! We're ALIVE" can be heard before it cuts off. Hmmm…after awhile it begins to sound like it actually matches as an ending for 「…Sukidayo!」 but that's just probably me trying to convince myself! 😛 Hope everyone enjoys these performances! Wu-san let me know what you think. ^-^