Tsunku…revealed to be a fan of “Friends”?!

Posted on 2008年3月2日 by MorningBerryz

The reason for me getting up so early on a weekend day as I usually like to sleep in (since I wake up at 1:30 am Mon-Fri to go to work!) is that I spent the most of Saturday sleeping…I've had a cold all week long and it's just gotten worse on Friday. The funny thing is that I don't even have any cold medication as I rarely catch a cold ever. Stomach viruses….that's another story! 😛 So what better way to spend the little time that I was awake yesterday in taking in a few episodes of my favorite t.v. sitcom of all time, "Friends." 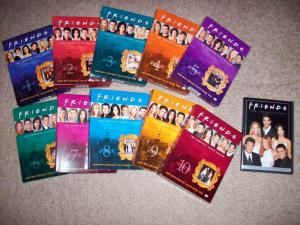 I just love this show soooo much and I can watch the entire series over and over and over…which I do! I can't even remember how many times I've watched this series in its entirety but it may be borderline obsessive at this point! 😛 So I'm watching season 1 (again!!) and when I get to the fourth disc something in the first episode on that disc catches my attention for seemingly the first time as I can recite a lot of the dialog from ah…too many viewings….and I it's funny that I've never noticed this before. Jennifer Aniston's character "Rachel" is wearing an outfit which is very similar to the outfits worn by Momusu on their debut commercial single "Morning Coffee"!!! Here have a look! 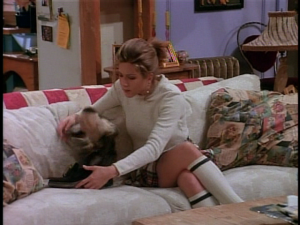 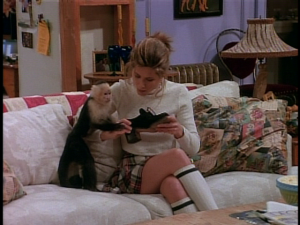 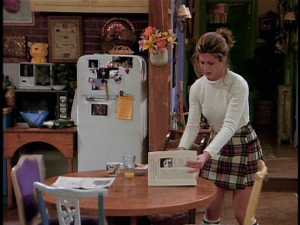 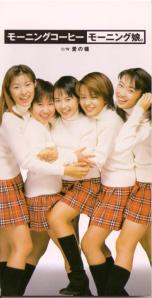 Okay Momusu are wearing tall black boots while Rachel is wearing cute white high socks and there is a slight difference in their plaid skirts' color scheme but for the most part don't their outfits look eerily similar?! Okay maybe it's just my cold giving me strange thoughts and visions but I think Tsunku is secretly a big fan of "Friends"!! ^-^ And since "Friends" did debut in 1994, about 4 years before "Morning Coffee" was released…anything strange is possible! 😛

Lover and free spirit who's interests in Japanese culture and the like are insatiable. I am of pure Japanese/Okinawan descent, love my cats, sleep and am a bit naughty at times :).
View all posts by MorningBerryz →
This entry was posted in Hello! Project, Humor and tagged friends, hello! project, jennifer aniston, momusu, morning coffee, morning musume, rachel green. Bookmark the permalink.

10 Responses to Tsunku…revealed to be a fan of “Friends”?!