Posted on 2008年2月23日 by MorningBerryz

While I have a feeling that the H!P fan consensus would likely have Manoeri as the undisputed most popular Egg, for me personally it’s not quite that simple as ever since the debut of Ongaku Gatas these two have been in a virtual tie…and while Nocchi did take both rounds one & two (“narihajimeta koi no bell” & “Yattarouze!”)…it’s basically just a matter of a coin flip separating them from each other. Paul at Hello!Blog very very kindly agreed to do some H!P shopping for me while in Japan recently and Nocchi & Manoeri were atop the priority list…well just behind Rii!…and he sent me these photos with the exception of the 4 red 5×7’s & mini Nocchi poster which were sent from Ohta.

Separating these two is going to be quite difficult and at this very moment Sengoku Minami is close to making it a three way tie! One thing that I begin to ponder is what is the actual shelf life for Eggs after which point they are sorted, chosen and sent off to the H!P market where they will soon find their way to your local record store shelves as part of a unit or “permanent group”…well if you happen to live in Japan. 😛 And what becomes of an Egg which farmer Tsunku deems unfit for a unit at the time of their graduation as it doesn’t appear that all Eggs are treated equally….could they have been sent to work on Tsunku’s million acre farm back home or perhaps an office job along Keisan, spending their days in “H!P” balancing his books and helping to plan the next wing on his mansion which many of us fans have helped to build in a financial sense? And you probably thought that Tsunku was just a producer/song writer/occasional stage crasher/…and big American Idol fan!!…I wonder when the next rounds of auditions will be held….and please don’t ever announce again that there are no winners! That was a terrible audition nightmare and I felt sooo bad for the finalist and everyone else that showed up for apparently…nothing. :O I’m now trying to imagine Tsunku with a pitchfork….hmmm..no not that kind of pitchfork!! :O 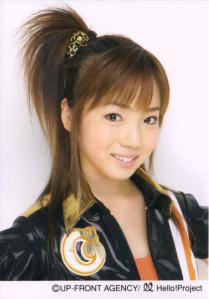 Now back to trying to separate these two…first point goes to Nocchi for being the leader of the Eggs……and Nocchi is surprisingly a bit older for an “Egg” as she’ll be 20 at the end of this year…thank goodness Farmer Tsunku deemed her appropriate for Ongaku Gatas!!!

…….although I have to give Nocchi a point for being the most adorable H!P Egg in candid situations such as pv making of footage where she rightfully so should be due to her age. She just seems to be so comfortable and natural in front of the camera and that’s not something that I can totally attribute to just her being a bit older than the others as it usually takes time for this to occur and Nocchi already possesses this even in her first substantial exposure as a result of being in Ongaku Gatas. 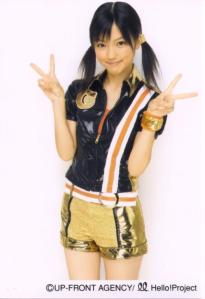 Manoeri gets a point for her uncanny ability to raise the level of a song with her incredibly cute sighs and I was really hoping for more of them while I was listening to “1st Goodsal” today!!

When it comes to hairstyle I give a slight edge to Nocchi as I love her brown highlights and cute bangs! Please keep the H!P Hairstyle Massacre aka their styling agent out of the Egg department at all times as we’ve all seen what can happen when one of them is set loose in H!P land with a pair of scissors and a “I thought this would look nice…” notion!! 😛 Think Ayaya…during her second “Alo-Hello!” release, Gocchin during her first “Alo-Hello!” release…and the list goes on. I wonder if anything dawned on these hair massacre experts when Gocchin began wearing hair extensions shortly after the ill advised cut as that couldn’t have been the original plan I would think.

And Manoeri gets another point for her artistic sighs, for their ability to get a lyricist out of a writer’s block situation where the right words just won’t come…….(insert “sigh”) songs completed! ^-^

Nocchi gets a another point for her Gatas jersey being #23 as that was Michael Jordan’s number! And it’s a good thing that they didn’t assign her #45 instead! 😛 Ouch!

Manoeri gets a point for her stylish ponytails as this style hasn’t been worn with this kind of impact since Aibon & Nono!!

When it comes to their smiles I give the point to Nocchi and all I think one must do is watch her radiance beam in her close ups in the pv for “Yattarouze!” Such a wonderful smile! 🙂 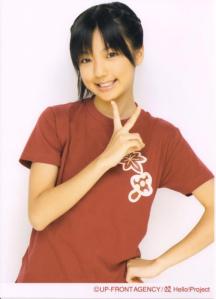 The point for visual presence goes to Manoeri no doubt!! Even in a group with so many great H!P members, Manoeri immediately stands out…she’s like a magnet, an Egg magnet…whatever that is!! 😛 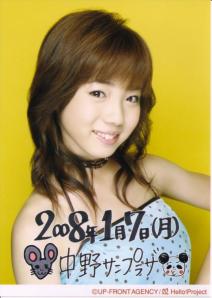 A point goes to Nocchi for her dancing ability and this is really cutting it close….wait I’ll flip a coin….it’s heads! Nocchi wins!! “Heads” was hers right? 😛

When it comes to penmanship or more specifically their autographs….the point goes to Manoeri and even though Nocchi did draw a little chickie (see autograph in very first photo in post, top right corner) it’s Manoeri’s ultra cute Eggs that take first place…complete with faces and hearts!! ^o^ I do wonder if she’s ever perused through Kamei’s state of the art guide to “Being the first to leave autograph sessions EVERY time guaranteed” which surprisingly not too many members have read at this time. 😛

Okay so what have we learned so far…aside from Tsunku and his ranch back home?…they’re both adorable and talented but not much else as they seem to be still deadlocked in this imaginary head to head “competition” that seems to have leaped from my sometimes strange mind. 😛

Lover and free spirit who's interests in Japanese culture and the like are insatiable. I am of pure Japanese/Okinawan descent, love my cats, sleep and am a bit naughty at times :).
View all posts by MorningBerryz →
This entry was posted in Featured, Hello! Project and tagged hello! project, hello! project eggs, mano erina, manoeri, nocchi, noto arisa, ongaku gatas, tsunku. Bookmark the permalink.