Today's episode continues right where we left off as the Wii Fitness tournament resumes! While both Sayu and Kamei were eliminated on the last episode, the next matchup features a battle between Tanakachi & Aichan and awaiting the winner is Gakisan who triumphed over Kamei in the hula hoop duo previously.

Given a 30 second time limit, Aichan and Tanakachi find themselves back on the Wii fitness board only this time the game involves a marble (representing each player) which each player must use their balance in order to manipulate a floating platform with the goal being getting their marble into the hole in the platform thus advancing them to the next level and gaining themselves points in the process. The time limit also gains additional seconds with each platform completion giving the player more time to complete each challenge.

Tanakachi takes but only a couple of seconds before she successfully clears the first platform while Aichan is busy roaming the platform slowly getting closer to the goal until she finally clears it! Tanakachi displays great balance skills as she moves through the game's early stages in an almost effortless manner! For awhile Aichan also gets on a roll completing a couple of levels in quick succession but in the end it's not quite enough as her time eventually expires making Tanakachi the victor in their battle. The gameplay has somehow caused Tanakachi to tear up a bit! :O

By turning the rectangularly shaped Wii fit board causing its length to appear in front of each player we now have the necessary angle for a snow board duel! Sayu faces Kamei in a consolation battle and the action is fast and furious as the players' on screen characters zip their way down a snow slope and snowboarding has never looked this cute before as Sayu has a perfectly executed stance using her arms to help balance her maneuvers down the course!…until she almost loses her balance falling backwards slightly! :O After seeing Sayu "ride" the Wii fit board in an almost authentic looking way it's quite hilarious as we then see Kamei flat footed with virtually no knee bend trying to make her way down the course all the while coming into the close proximity of the outer fence! :O Hmmm…somehow I don't think that Kamei has ever attempted to ride a skateboard or any kind of board for that matter as she tries shifting her balance by bending at the waist in a most extreme manner! :O Heheh it's a devastatingly cute display put on by both members with Sayu coming through in flying colors while Kamei frets on her defeat only to have Sayu claim its format to fall into a strong personal forte of hers! 🙂 Who could've known! After seeing her have such a hard time balancing on a unicycle she now displays an uncanny ability to "balance" (albeit in a simulation) on a board! :O Makes me slightly ponder the significance of Sayu's bento horror as perhaps underneath it all she may just be a five star chef! 😛

The final is now set with a showdown between Tanakachi who's been displaying "Mikitty" like toughness lately going up against Gakisan and just the announcement of their upcoming challenge has both members displaying incredible disbelief! The game presents the greatest challenge up to this point as it involves a tight rope walk across building tops and if that's not enough to create some anxiety then a few obstacles along the way will surely add to the feat as the girls will also be required to jump over them (using a slight knee bend & upward stance relieving their weight momentarily) , all while still retaining their balance! :O Gakisan is amazingly steady having only a minimal amount of off balance moments during her crossing while Tanakachi encounters much more abundant balance issues ultimately causing her crossing time to be much slower than Gakisan who wins quite comfortably! 🙂 One notable technique that Gakisan utilized much better than Tanakachi in this final battle were her arms as she used them for added balance in a very similar manner to how Sayu used them to execute her way to snow boarding Wii glory. Apparently the Wii fitness board reacts much better to a realistic approach in these events as witnessed in these triumphs. The final standing have Gakisan atop the Wii fit list followed by: Tanakachi, Aichan, Sayu, and the sometimes adorably awkward Kamei coming in last. And to the winner come the spoils!…congratulations Gakisan!

The episode continues with the next installment of the "Chibikko KING" segment!  Team Musume is represented today by Jun Jun :), Kamei, Aichan, & Tanakachi. It indeed must be chilly there as Kamei can't stop bouncing in a slight shiver! The challenger today is a young BMX wizard and at just the age of 11 he's quite an accomplished rider already! You've got to love Kamei!…as she begins speaking to him as if he were a much younger child! :O Her entire demeanor is quite amusing and she gets quite a reaction here. Aichan is adamant in noting their 10 year age difference and has Tanakachi cracking up beside her! 🙂 A call to Otousan ("father") who's a pro rider on the circuit brings out a much younger person than what was expected by the girls and he executes an impressive jump over the little King himself! The King inquires his age which he replies as being 35 and this talent being showcased today is indeed a family affair.

Team Musume will race in a relay format using small tricycles while the Chibikko King challenger will face numerous obstacles, jumps, and the occasional call to BMX wizardry along his path to the finish creating the handicap for the race. The use of the tricycle itself is a heavy handicap as it will no doubt slow down team Musume but the hope is that the "stop" zones being enforced on the Chibikko King challenger will help balance out this aspect of the race.  Ah the batsu (penalty) gauntlet has just been thrown down as a staff member has just shown Team Musume a photo which will be displayed in case of their defeat! It gets quite a reaction as all four members are pleading "no" to it! :O Right out of the gate Reinachan is being left in the dust as the tricycle proves to be quite a speed dampener but with the first "stop" zone she quickly catches back up and actually takes the lead heading into the first rider tag exchange. Happily each member has now been given their own individual bikes to ride as in a previous relay such was not the case and each rider switch that occurred with only one bike amongst them became too time consuming in the long run. Aichan has now been handed the reigns as the Chibikko King challenger has reached yet another "stop" zone after multiple jumps, impeding his progress against team Musume as we now see their lead growing quite large at this point! 🙂 Aichan tags Kamei and a first victory appears to be in sight as the challenger has hit yet another "stop" zone! Ah the excitement has Kamei quite worked up as she is a constant verbal explosion in the funniest tone as she heads into the final stretch! 🙂 A non stop barrage of "matte matte!" (wait! wait!) can be heard from Kamei as the BMX wizard "surfs" on his bike and then rides right over a car! :O A few quick replays are given as the little King sounds to be beside himself in excitement! Ahh the sizable lead that Team Musume once held seems to have evaporated in just seconds as kid BMX is now just a few bike lengths behind them as Kamei tags Jun Jun for the final leg of their relay. :O The race has now reached it's most exciting point as the final 15 second "stop" zone is holding the BMX wonder back while Jun Jun desperately heads for the finish line which is right there in sight! In dramatic fashion with only about 3 bike lengths to go Team Musume is once again defeated in their best showing thus far as kid BMX crosses the line first as he clears his final jump! :O Ah the disbelief is now sinking in as the looming batsu punishment is yet to be displayed. If it's any consolation kid BMX states his fatigue brought on by his course and it's numerous challenges. 🙂 Kamei is most animated in protesting the photo's emergence and actually drops down in dismay! On the other hand Jun Jun really appears to be more amused by the photo than anything else!! 😀 Ah… :O one look at the photograph and you instantly know why Team Musume was so apprehensive about it's display! :O!!!!!!! That about sums it up!

The Kirarin Revolution/ Momusu collaboration is next up on the program as Morning Musume hosts a special event introducing Sayu's Gurossan character. In case anyone missed the preceding segments leading up to this, a brief recap is given highlighting the events of this special anime collaboration. And of course no Kirarin event would be complete without the starring voice actress herself…as we see Kohachan make her entrance as well as the appearance of a very special Momusu fan whom we previously witnessed a very special surprise meeting between herself and members Kohachan & Sayu! After some thoughts from Kohachan along with character design winner Sayu & new voice actress Mittsii, we are set for a special debut screening featuring Gurrosan! I haven't seen very much of this series except for brief clips on HM so this brief scene was quite a treat and just hearing Kohachan and Mittsii voice their characters really made me smile! 🙂 Somehow it's a slightly surreal experience just knowing it's them! 🙂 After a couple of reactions from members Sayu & Gakisan the episode closes with a preview of next weeks "viking" segment and……………could it be………………another banana "incident" involving Jun Jun!!! 😀 Tanoshimi desu ne! 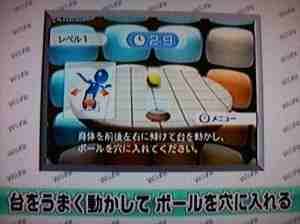 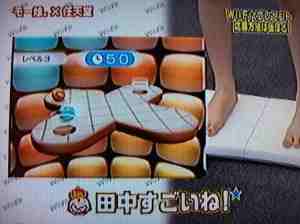 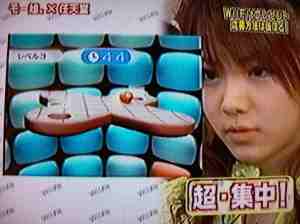 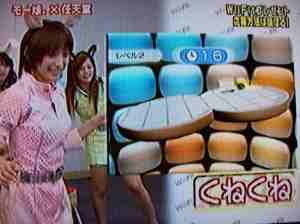 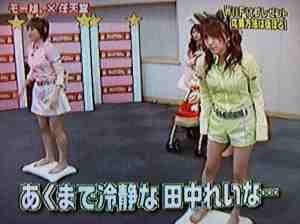 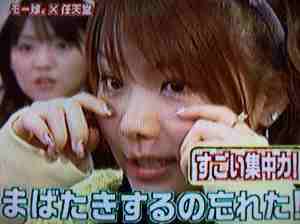 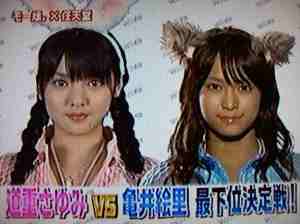 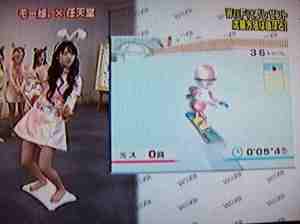 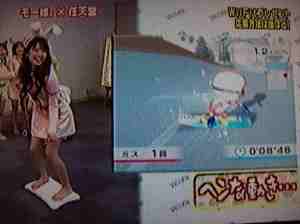 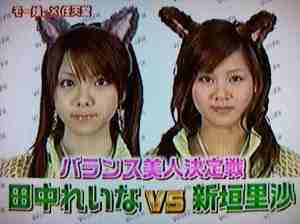 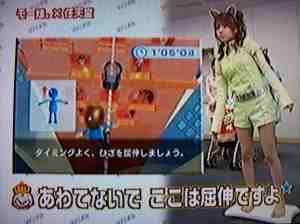 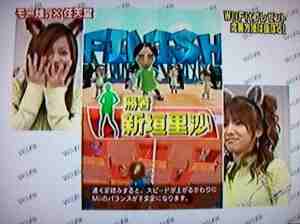 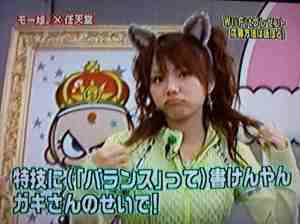 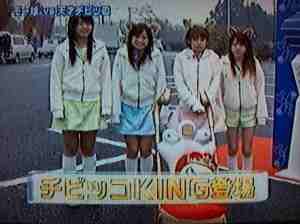 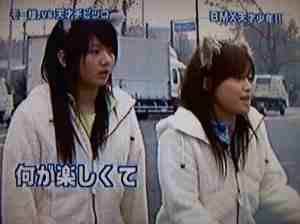 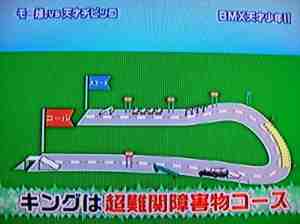 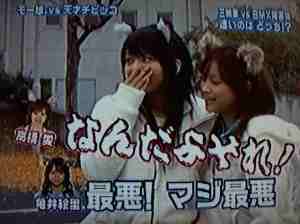 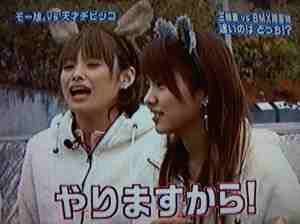 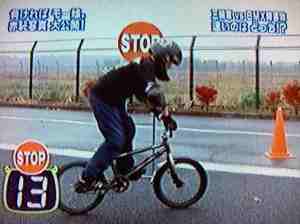 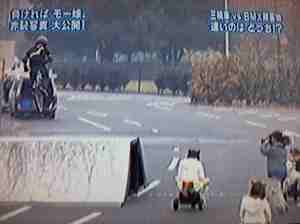 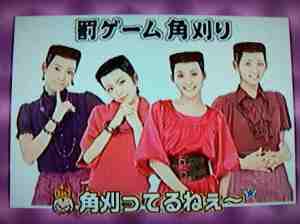 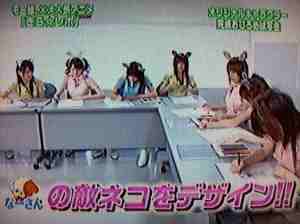 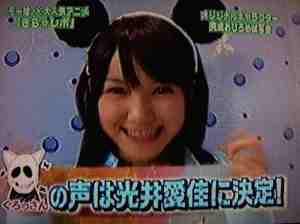 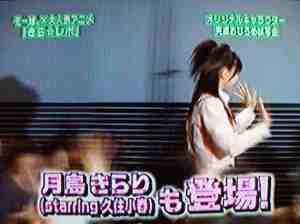 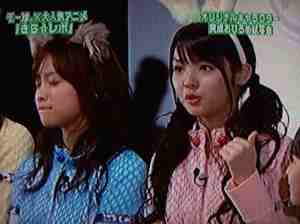 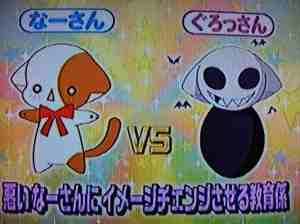 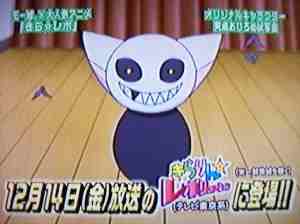 Lover and free spirit who's interests in Japanese culture and the like are insatiable. I am of pure Japanese/Okinawan descent, love my cats, sleep and am a bit naughty at times :).
View all posts by MorningBerryz →
This entry was posted in Hello! Project, HM@ and tagged gurossan, hello! project, hm@, kirarin revolution, momusu, morning musume. Bookmark the permalink.