Posted on 2007年12月5日 by MorningBerryz

Today's episode cycles back to the "Uso Queen" segment and while Momusu is present in entirety, the four members chosen for the challenge are Tanakachi, Lin Lin, Kohachan, & Gakisan. Their challengers are the duo of Kuwabata & Ohara and yet again we shall see if a woman's instinct can break through the facade of team Musume's deceit as their undefeated season continues. The challenge remains the same as the opposition must determine which Momusu member is being deceitful about her dish being a familiar favorite as one member is having it for the first time.

The cuisine featured today is from Kankoku (South Korea) and Tanakachi is first to reveal her "favorite" dish as being "bibinba" which is a seared rice dish featuring vegetables & an egg. While all eyes will be on Tanakachi carefully observing her reaction to determine the truthfulness of it being a familiar dish, she delivers immediately a reaction of surprise when catching a first sight of the slightly scorched rice which cradles the dish. Interesting reaction…but could it all be an act…?

Next up is Kohachan and her dish is revealed to be "samugetan", a tasty looking soup which features a stuffed chicken…and with this it doesn't take long for a few questions to be asked regarding how someone who's just 15 could possibly have this specialty as a favorite of hers. They pose the question of "when she first had it?" and to this Kohachan quickly replies "at about age 11." Ohara is apparently familiar with the dish as it's a favorite of hers and this may perhaps help her in determining the truth here. It's not long before Ohara begins drilling Kohachan about the ingredients in the dish as the question of "what kind of carrot is used?" is immediately asked. With a thoughtful pause Kohachan replies that it's of the stringy grated nature that is used here which has either helped or added to the suspicion. It's now time to dig in and amid gasps from her fellow members Kohachan lets out a "kowai!" (scary!) remark while attempting to break apart the chicken which is so 100% Kohachan ( a self declared scaredy cat! which surfaced on an old episode of H!M where members were challenged to face their weaknesses) but yet how well do her challengers know her? :)  Kohachan seems quite familiar with the dish and how it's eaten and seemingly hasn't created much suspicion.

A very enthusiastic Lin Lin introduces her favorite Korean dish to be a cold noodle specialty which is consumed along with numerous spicy optional side dishes. When asked when was the first time that she had the dish Lin Lin replies that she had it in China with her family and adds that she loves using vinegar as a seasoning on this dish! :O Just how much vinegar?! Lin Lin actually removes the cover spout from the bottle and begins pouring it on! :O It's a sea of vinegar and Gakisan's expression says it all!! :O!! It's cute as Jun Jun quickly adds that Lin Lin uses vinegar all the time and has her fellow members quite amazed! Lin Lin then tries some and has a very delightful reaction that reads sincere to me at this point. 🙂 When asked about the flavor she replies "suppai" (sour; vinegary). :O And it gets even better as Lin Lin is questioned about the fruit topping which she mistakes for an apple slice…….heheh but after being caught giving her handy nearby notes a quick glance and correctly stating it as a "nashi" (pear), Lin Lin in the most adorable voice tells her challengers how her "Japanese isn't very good yet." 😀 Ayashii desu ne! 😛

Gakisan is last to present her "favorite" Korean dish and it's one that I'm not familiar with: "samugyopusaru." Looking at it it's a pork lover's delight! Not being too fond of pork and just by its appearance I'm already seriously wondering if Gakisan could possibly love a dish like this! Gakisan reveals that she first had this dish while traveling in Korea with her family and the aspect of the spiciness of Korean food comes up as Gakisan describes how she likes to include kimchi along with the pork. However after a brief VTR clip showing how the dish is traditionally eaten as a wrap Gakisan instead lays the pork and kimchi on rice in the form of a little kimchi sandwich. :O After taking a bite her reaction which suspiciously looks a bit forced to me at this point and her declaration of "Oishii!" (delicious!) has her challengers asking "how did it taste, your first time eating it?" Gakisan can't hold back her laughter as she quickly replies that "it's not her first time!" And they quickly add that her kimchi sandwich was strange!

And now it's time for the final judgment and initially Kohachan & Lin Lin's names come up as front runners for the most suspicious then leaving Kohachan all alone as the challengers will get another look at her demeanor while consuming her dish. Hmm…Kohachan seems to appear right at home with her dish as I really don't see her as being the one lying. So with their final decision Kuwabata & Ohara choose…..Lin Lin! The initial look on Lin Lin's face is a mixture of surprise and a kind of melancholy sadness perhaps because she can't believe that she was chosen either due to truth or a feeling of having misled them completely. 😛 The apple is once again brought up! 🙂 I'm picking Gakisan as I just can't see her liking that dish and her reaction really seemed a bit forced to me. And now for Lin Lin's judgement……and she indeed is telling the truth as team Kuwabata & Ohara have lost! So have I! 😛 And adding to that revelation Lin Lin's notebook doesn't include the word "nashi" (pear) in it!! :O She played it perfectly and misled everyone! Her little glance at her notebook really got them (and me) going down the wrong path! And now to find out who the uso queen is…and it's Kohachan! Ah her "kowai" reaction was indeed 100% true.

Next is a continuation of the Momusu/ Kirarin Revolution collaboration and all members except Sayu & Kohachan (who may still be at their new friend's home 🙂 ) are present for a wacky helium game. With 7 cans and only one which doesn't contain helium, each member will choose one container, inhale and then say something "bad" to the camera! 😛 The member who chooses the can without helium will win the incredible opportunity to be the voice of Sayu's new character!! Aw the little King encourages some Yankee fun from Tanakachi! 🙂 Heheh the sound of everyone's voices is incredibly funny and in particular I really liked Aichan & Jun Jun's voices on helium!! 😀 Makes me think of Alvin and the Chipmunks! Mitsii turns out to be the winner as she picks the one can without helium and it's amusing as she was probably anticipating her voice to be on helium as she spoke to the camera with enthusiasm! With this she will become the voice for Sayu's winning character "Gurossan!!" But of course they can't possibly end the segment without allowing Lin Lin & Gakisan their turns at some helium fun! Gakisan sounds incredibly adorable as a chipmunk! 😀 Makes me think that maybe they should be looking into the idea of their own Momusu chipmunk themed anime show. 😛

The show ends with Berryz Koubou with an in studio performance of their new single "Tsukiatteruno ni kataomoi." Dressed in their beautiful white outfits that they're wearing on their single's cover, Berryz Koubou looks angelic in this performance and after all that helium fun Momo's adorably cute voice seems helium inspired as well! 😀 While every member looks radiant here, Miya & Risakochan really stand out in this performance and I'm really hoping that they perform a song of theirs without it being part of a medley when they make their debut appearance as a group on the Kohaku (NHK's annual Red & White Songfest) on January 1st!

Next episode looks to involve Nintendo's incredibly hard to find Wii game console! Tanoshimi desu ne! Now if only I can find one on this island sometime soon. 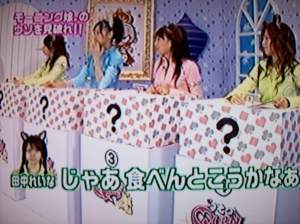 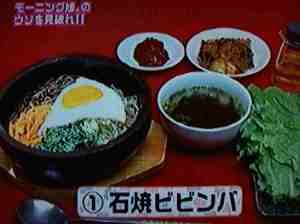 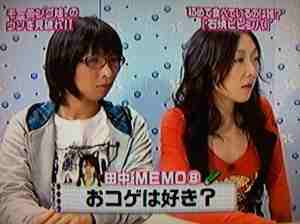 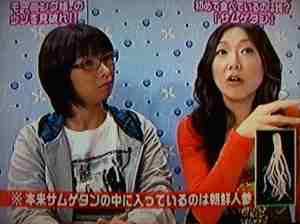 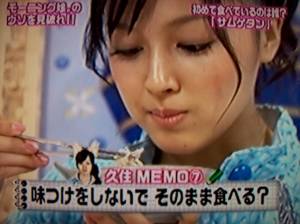 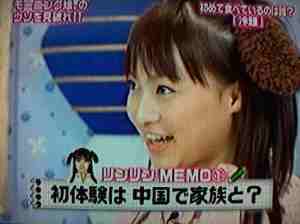 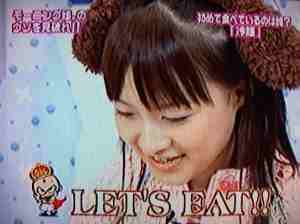 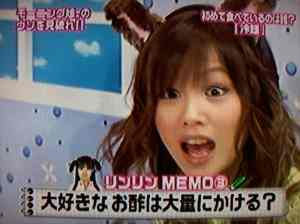 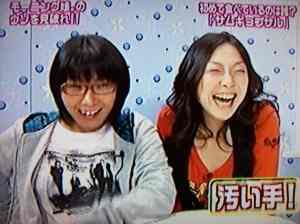 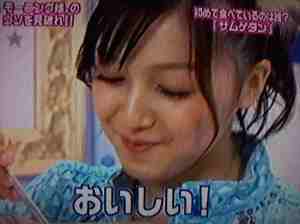 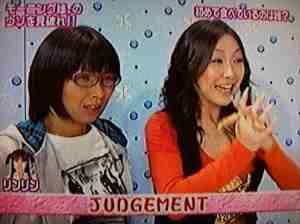 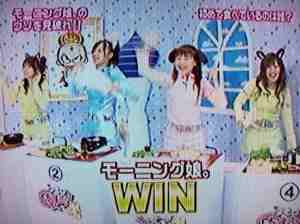 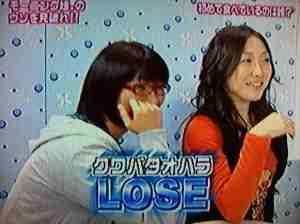 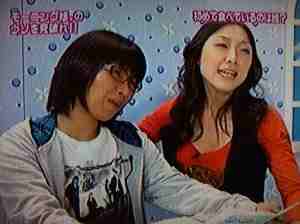 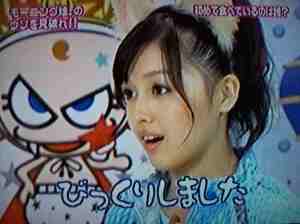 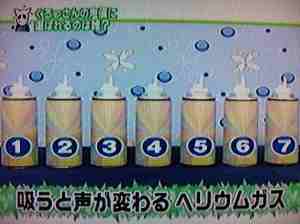 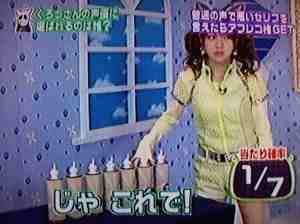 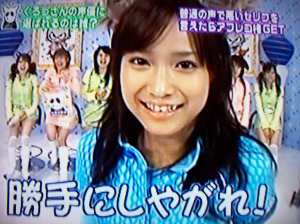 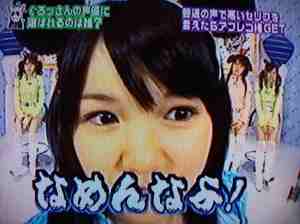 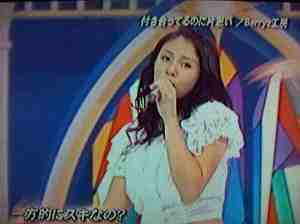 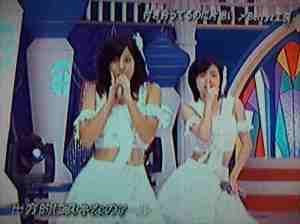 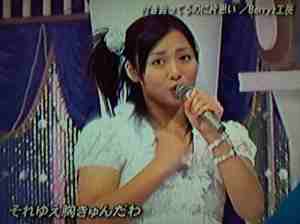 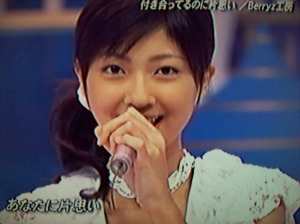 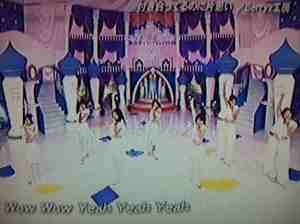