Both have had incredible seasons with Gordon winning 6 races and Johnson winning 10. It's a storybook ending for me personally as Gordon and Johnson are my 2 favorite drivers and heading into the final race at Homestead all other competitors have been mathematically eliminated from the Championship run. The only thing more that I would have hoped for at this point was a bit of a closer margin between them in the standings. But that's really nit picking with the given dream scenario. After last week's event Gordon all but conceded the championship to team mate Johnson as he now sits 86 points behind and Johnson need only finish 18th or better to clinch his second Nextel Cup championship. Again it brings to mind the thought of the Chase format and how it has brought more drama to the sport's final 10 races but at the same time has denied Gordon his 5th title which probably would've occurred a few years back and he realistically could have 6 by now. At the same time it's been absolutely amazing watching Johnson dominate the series this year with an incredible 10 wins and 4 of them in a row during the Chase. 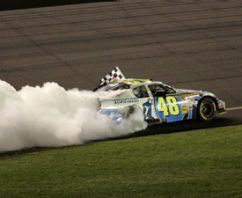 A feat that hasn't been accomplished since 1998 when Jeff Gordon set this mark en route to his 3rd championship. Johnson can now match a record 5th win in a row if he's victorious at Homestead, a track that he's never won at and tie the "King" Richard Petty who's landmark accomplishment has stood for years. Petty has been noted as expressing his feelings on the Gordon vs. Johnson scenario stating how he feels it hurts the sport more than helps it. He goes on to say that the competition at the top of the standings being battled by team mates is unhealthy for NASCAR. While I respect his opinions I also couldn't disagree more. While sure they are my 2 favorite drivers and things just worked out this way as Gordon and Johnson were the 2 most consistent drivers this season and also won the most races, but I can't see how it hurts the sport. Both are charismatic and classy drivers and questioning their talent is way out of the question. The teammate factor actually adds a bit more to the intrigue and drama as such good friends and teammates have battled hard on the track all while retaining their respect and friendship off the track. Something easier said than done I think. Things really heated up at Martinsville earlier in the season as Johnson held off a charging Gordon in the final laps and they beat on each other till the finish showing how the teammate factor only goes so far on the track and especially when racing for the win. Open wheel racing has shown a different story in past occurrences where a driver has "allowed" a teammate to win an event perhaps due to team owner orders or championship points standings. The integrity of the sport surely isn't 'hurt' by having this type of rivalry at the top of the sport and given Gordon and Johnson's resumes I think it only helps it, contrary to what Petty may think. Johnson will start on the pole in today's season ending event while Gordon will start in the 11th spot.

Whatever the turnout for today's event, Jeff Gordon has had an incredible season wiping away yet another track from his winless track resume as he finally captured the checkered flag at Phoenix International Speedway and then matching career wins with the late great Dale Earnhardt in the process. Gordon with the blessings of Dale Jr. then paid tribute to the legend after the win holding the #3 flag out of his window during his victory lap. It was just one of those great moments in the sport and something that I'll never forget witnessing. Moving up on the all time wins list, Gordon now has a couple more drivers in his sights including the 84 win mark set by Darell Waltrip and may possibly eclipse that mark next season with another great run. Talks of his retirement have also lightly surfaced and hopefully next year won't be his last. Jeff Gordon is the reason that I watch NASCAR and not seeing the #24 on the track would be incredibly sad for me. I think this season has shown that he still can get it done and when it comes to the "Car of Tomorrow" which will run full time next season Gordon has shown that his adaptability to the new templates and format has been an extremely smooth transition.

So with the race just minutes away from now the stage is set for one last showdown between 2 great teammates who have both had incredible seasons filled with landmark achievements along the way. It's the 'drive for five' vs. a second championship in a row for Johnson and while Gordon may have appeared to concede the championship to his teammate, in racing there's nothing that's a sure thing. So many variables are involved that can take a driver out of contention at every event. Whether it be a tire going down, another driver's mistake, speeding on pit road, engine woes, fuel mileage strategy, or countless other possibilities it's not over till the checkered flag has waved and the fat lady has sung. Too many times have I seen a "sure" winner incur some bad luck and it can even happen on the last lap of an event…just ask Bill Elliot or Rusty Wallace for starters. So for Jeff Gordon, even with a 86 point deficit to overcome in this season's final event the fat lady may be warming up but the curtain hasn't been drawn just yet. So today I will watch with much nervousness and anxiety all the while knowing that one of my favorite drivers will hoist the Nextel Cup Series Championship when the last lap of the season has been run.

Lover and free spirit who's interests in Japanese culture and the like are insatiable. I am of pure Japanese/Okinawan descent, love my cats, sleep and am a bit naughty at times :).
View all posts by MorningBerryz →
This entry was posted in NASCAR and tagged jeff gordon, jimmie johnson, nascar, nextel cup series, racing. Bookmark the permalink.