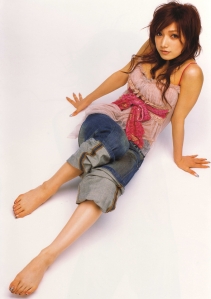 While details remain light, reports coming from a recent Gocchin concert are that she officially announced that she will be leaving Hello! Project. I never saw this coming and there is speculation that it may be related to the well publicized troubles that her brother has encountered. I personally don't think that anything that her brother or any other relative for that matter does should impact her career as it just seems unfair. Of course this is still speculation and any direct link is yet to be stated and I imagine never will. Talks of her having conflicting ideas as to where her career is headed with UFA seems to be more directly linked to her sudden announcement of her graduation. I'm shocked. I don't really know what to say about this right now besides it being very disappointing and sad. It is also being said that Gocchin will not have an official graduation concert and that the recent show that she made this announcement at will serve as such and will most likely be her final concert appearance as a member of H!P. This news has the effect of being hit by a freight train and I'm just stunned!

Reports also state that Gocchin will continue as a solo artist with another yet unnamed company and I wish her the best in continuing her career. She will be missed so much. When more information is known I'll try to write more about this troubling news and what Gocchin has meant to Hello! Project over the years.

Lover and free spirit who's interests in Japanese culture and the like are insatiable. I am of pure Japanese/Okinawan descent, love my cats, sleep and am a bit naughty at times :).
View all posts by MorningBerryz →
This entry was posted in Hello! Project and tagged gocchin, gomaki, gotou maki, hello! project, j-pop, momusu, morning musume. Bookmark the permalink.