On November 21st the greatest female band that Japan has ever produced returns after a 11 year hiatus to bring fans a brand new album featuring a Winter theme!! News of a reunion had surfaced a few months ago but as time passed I really didn't think that this was going to happen. I can't even find the words to describe how incredibly happy this makes me! Back in May and October of last year Princess Princess (often called Puri Puri) released 2 amazing box sets which saw every single & album release of theirs remastered and their complete video discography finally all brought to DVD! A complete collection of the musical works covering their entire career beautifully packaged. Since their break up in mid '96 every member has remained active in music whether it be by solo release(s) or song writing for other artists. 2 notable tracks ("15sai no watashi e" & "Anata to mita sora") which were penned by the team of Okui Kaori (now Kishitani Kaori) and Tomita Kyoko appeared on Sakai Noriko's album "in snowflakes" in late '96 and this served as just a small example of the potential music that they indeed could still be releasing had the break up not occurred.

To say that I'm looking forward to this new release doesn't even begin to capture the excitement that I'm feeling as I anticipate its arrival next month. In one's life there are a few landmark artists or groups that change the way you look at music forever and become one of your all time favorites, Princess Princess is just that for me! By far one of the most important groups that I've ever been introduced to and their music has really touched and means so much to me. Princess Princess isn't a group which one can fully appreciate by hearing just a few songs or seeing a few live clips of them but rather needs to be approached as a full immersion into their entire discography and only then can one truly begin to understand their greatness. Not your average band, good band, but a premiere band. Princess Princess's sound, innovation, and style is one that has gone full circle and while they began establishing themselves as a rock/pop group they cannot be pinned down in any single genre as they've covered so much in their career. Musicianship and songwriting at this level doesn't come around too often and it's great to bear witness to it albeit in retrospect for me as I was introduced to their music after they had recently broken up. As a fault of mine it took yet a few years afterwards for me to see what was right before me, some of the greatest music ever written. I'm happy to be able to state this in the present tense: Princess Princess is Kishitani Kaori (lead vocals, guitar), Nakayama Kanako (lead guitar, backup vocals), Watanabe Atsuko (bass, backup vocals), Konno Tomoko (keyboard, backup vocals), & Tomita Kyoko (drums, backup vocals). While Kishitani Kaori is the main songwriter, every member contributes with both lyrics and music as the distinct sound which is Puri Puri is easily recognizable.

Their new album (I'm still giddy thinking "new" album!! :D) will be released as both a limited and regular edition. The limited edition will include an additional karaoke CD with 4-5 tracks on it.

I've managed to collect their discography through the help of Otokichi Premium as well as Yahoo! Japan Auctions. The 2 box sets which were released last year helped me to complete their video collection on DVD as some releases were never available on this format previously and the wonderful sound of digital remastering is always a good thing. 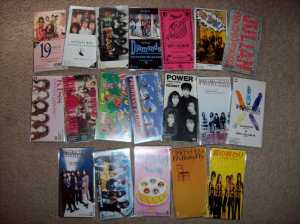 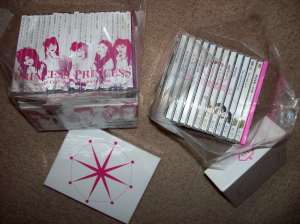 Lover and free spirit who's interests in Japanese culture and the like are insatiable. I am of pure Japanese/Okinawan descent, love my cats, sleep and am a bit naughty at times :).
View all posts by MorningBerryz →
This entry was posted in J~Pop and tagged j-pop, princess princess, princess princess pri pri fuyuson, puri puri. Bookmark the permalink.