Posted on 2007年10月6日 by MorningBerryz

In collaboration with Aquaplus, Dream Tech has created a beautiful 1/6 scale pvc statue of Kousaka Tamaki who is one of several featured characters in the popular Japanese “renai” (aka dating simulation) game “To Heart 2.” This series has gone from Playstation2 to pc and has since become an anime and manga series in Japan. The Japanese really do come up with some of the most innovative ideas in the gaming world and these type of “renai” games are hugely popular and even feature “real” time voice acting as these games play out. 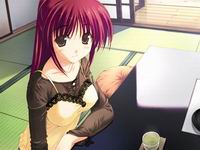 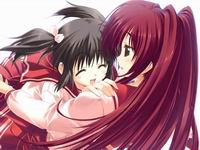 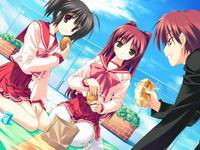 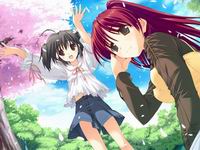 However you’ll need a chipped  PS2 to play this version as I don’t think it’s been translated for the American market as of yet. Gaming has never looked so cute in this highly interactive form!

Several Tamaki figures have been released in the past 2 years but I found this one to be the most original as she’s lying down in this mizugi version.

And now she’s free out of the box…

This Tamaki figure also comes with a clear oval base and with that hairstyle she kind of reminds me of a cat and brings to mind “Cat Girl Nuku Nuku” which is a really fun anime which answers the age old question: “What would life be like if your “sister” was half cat and half robot?” 😀 School will never be the same…

I own a couple series of this anime but the original which is pictured here on VHS remains the most entertaining and best written…and back to the figure. Here are a couple more pics and as always this imported figure is beautifully detailed. 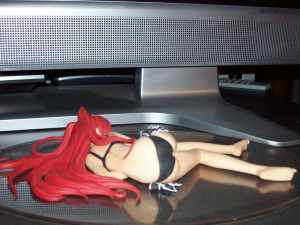 Lover and free spirit who's interests in Japanese culture and the like are insatiable. I am of pure Japanese/Okinawan descent, love my cats, sleep and am a bit naughty at times :).
View all posts by MorningBerryz →
This entry was posted in Anime, Featured, Video games and tagged anime, cat girl nuku nuku, kousaka tamaki, playstation2, ps2, pvc figure, to heart 2, video game. Bookmark the permalink.